How Old is Old? Comparing Dog Age to Human Age 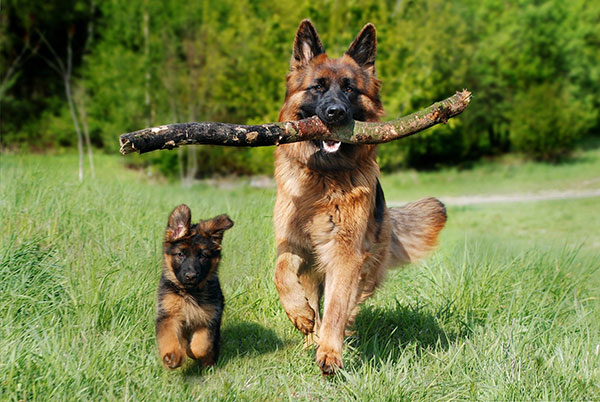 You watch your young pup bounce across the lawn. You see your old dog lumber slowly to the food bowl. You take a brisk run with your young dog close at your heels. You slowly walk to the mailbox and your old dog still lags behind.

What a difference a few years make to your dog. You do not feel older, so why does your dog? Perhaps it is because what you and your dog consider “old” are vastly different. Comparing your human age to your furry friend’s canine age is rather complicated but, simply put, one year to Fido is not one year to you.

The most common theory comparing human and canine ages uses this equation:

This simple equation is only a rough estimate. A more accurate comparison of human vs. canine age takes into consideration the dog’s size and breed.

Smaller dogs age more slowly and have longer life spans. Larger dogs, in contrast, age more quickly and have shorter life spans. In addition, certain breeds enjoy more longevity than others. When comparing size, small Poodles live longer than huge Great Danes. But when comparing breed, Great Danes may outlive larger sized Bulldogs. The 7:1 ratio does not hold across the board.

"Dogs develop more quickly the first two years of life, after which development levels out a bit."

Another factor that skews age calculation involves the rate of canine development. Dogs develop more quickly the first two years of life, after which development levels out a bit. During the first two years, one dog year equals about 10.5 human years. So, the dog: human aging ratios is 10.5:1 rather than 7:1. When a dog hits the three-year mark, he ages 4 years to every 1 human year bringing the ratio to 4:1. Using this formula, a 10-year old dog is the equivalent of a 53-year old human. Using the simple 7:1 ratio, this same 10-year old dog would be the equivalent of a 70-year old human.

All of these calculations are based on the assumption that the average human life expectancy in developed countries is 80 years. The average life span globally is only 66 years. So, the equations have to be altered according to geography. Complicated enough for you?

Simple Math Will Not Work

Complications in comparing dog age to human age are well founded. The old “7 dog years = 1 human year” theory is inaccurate, because the dog ages and develops more quickly the first two years of life. Plus, the ratio varies with dog breed and size. Even the more accepted equation utilizing the 10.5 factor the first two years of the dog’s life and 4 years thereafter has pitfalls, because it does not account for size and breed. The most accurate estimate of a dog’s age in human years is calculated taking size and breed into consideration. This method either categorizes dogs as small, medium, and large or more specifically uses their estimated adult weight.

So, what is the answer to the math problem?

Who knows? The easiest equation (7:1) is probably the least accurate. Formulas that take into consideration the faster development that occurs the first two years of life give a more accurate comparison. But even with this theory, there is variation. Some mathematicians feel that a 1-year old dog should be compared to a 10- to 15-year old human. The second year, as development levels out, should equate to 3 to 8 years of human aging. That would put a 2-year old dog on par with a 13- to 23-year old human. But that is still a big range. "

"What is consistent is the fact that dogs age more rapidly than their owners."

In short, there is no definitive answer to the math problem. There is just too much variability in the canine community; there are too many breeds and too many sizes. What is consistent is the fact that dogs age more rapidly than their owners and a 1-year old dog often resembles a gangly teenager. A 4-year old dog has the energy of a young adult, while a 9-year old dog walks with the stiff gait of a senior citizen.

To further complicate the issue, emotional maturity does not align with physical maturity. Emotional maturity occurs over an extended period of time. For example, a 21-year old human is considered an adult, but may not reach emotional maturity until age 40 or so; the same applies to dogs. Even though a 9-month old pup may be socially and sexually active, full maturity is not achieved until age 3 or 4. That is why 2-year old Labradors still chew your favorite slippers!

What is considered old for a dog?

Like humans, dogs suffer the effects of aging. Some signs you may notice (regardless of what size dog you have) include: