What is calcium and why is it important?

Calcium is a mineral that is found in small quantities throughout the body. It plays an important role in diverse and vital functions including muscle contraction, transmission of nerve impulses, blood clotting, and bone growth. 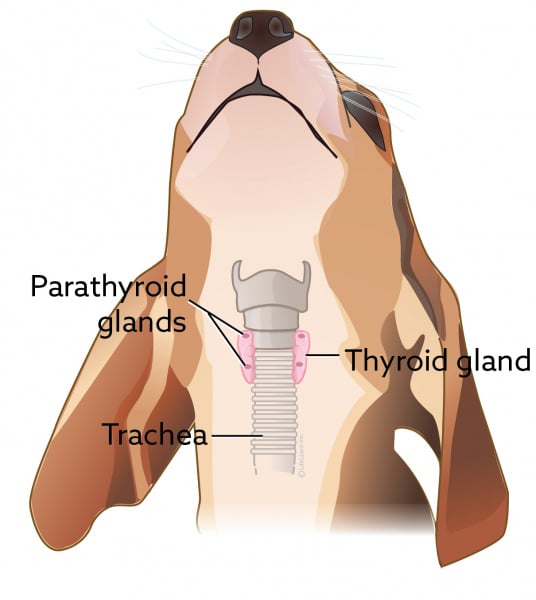 The term hypercalcemia is used when the level of calcium in the blood is higher than normal (hyper = “above”; -emia = “blood”).

How are levels of calcium controlled in the healthy animal?

Why is having high calcium bad for my pet?

High calcium levels may signal the presence of serious underlying disease including kidney failure, adrenal gland failure (called Addison's disease), a parathyroid gland tumor, and some types of cancer. Pets with abnormally high calcium levels may show signs of weakness, listlessness, increased drinking and urination, and loss of appetite. In some pets, prolonged hypercalcemia may contribute to formation of bladder or kidney stones.

How are calcium levels measured?

Total calcium. The test for total calcium is simple, rapid, and relatively inexpensive, and it is typically used as a preliminary test to measure calcium levels. However, total calcium can be falsely increased by diet and dehydration, making it an unreliable test in some situations. If preliminary testing reveals hypercalcemia, then measuring ionized calcium is often recommended to confirm the finding.

Ionized calcium. This is the definitive test for measuring blood calcium levels. It is an excellent test but is more difficult to perform than total calcium and requires patient preparation, as well as special sample handling. It tends to be more expensive and often takes longer to get results back from the laboratory.

What further testing is required if my pet has high total calcium on a routine blood test?

If there is no evidence of a disease that might explain the high value (e.g., renal failure, Addison’s disease etc.), then total calcium should be remeasured on a fresh blood sample to confirm the result. Repeat testing is warranted if it seems diet or dehydration may have contributed to the high initial value. Before repeating total calcium, the pet should be fasted for 12 hours, but must have access to water. A test to measure albumin (a blood protein) should also be done at the same time to check that the pet is not dehydrated. If the repeated value for total calcium is still high, then doing an ionized calcium test is recommended since it is the definitive test for measuring calcium levels. In some situations, your veterinarian may advise that your pet have the ionized calcium test after finding a high total calcium.

"Once hypercalcemia is confirmed, the challenge is to identify
the underlying cause."

Once hypercalcemia is confirmed, the challenge is to identify the underlying cause. Further testing will be needed to assess the health of the kidneys, adrenal glands, and parathyroid glands. If there is a history of vitamin D supplementation, testing for levels of vitamin D would also be appropriate. Your veterinarian may also want to examine your pet for signs of underlying cancer.

"If cancer is suspected, then a specialized blood test can be performed that measures a substance called parathyroid hormone-related protein (PTH-rP)."

If a pet has hypercalcemia but has low levels of parathyroid hormone, then it suggests there has been a breakdown in the normal mechanism that controls calcium levels. This is worrisome because it may mean that there is underlying cancer. The pet should be thoroughly examined, and additional diagnostic tests may be recommended, including radiography, ultrasound, cytology, or biopsy.

If cancer is suspected, then a specialized blood test can be performed that measures a substance called parathyroid hormone-related protein (PTH-rP). This hormone-like substance is produced by some cancers, and it acts like parathyroid hormone even though it is distinctly different from the normal hormone. If this substance is found in high levels in the blood, then underlying cancer is likely present.