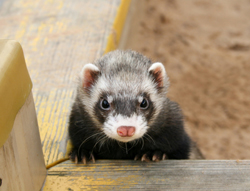 The average age for a ferret to develop an insulinoma is 5 years old, but it may be seen as early as 2 years of age.

What are the signs of an insulinoma?

Clinical signs may include pawing at the mouth, "stargazing", weakness (often seen in the hind end), weight loss, tremors, collapse, abnormal behavior, depression, lethargy, and confusion. The symptoms can progress to include seizures and hypoglycemic (low blood sugar) coma. The adrenal gland reacts to dramatic reductions in blood glucose by producing adrenaline; increased levels of adrenaline cause a rapid heart rate, tremors and irritability.

Some ferrets with tumors of the pancreas show no obvious clinical signs or may show only intermittent signs. If a ferret has intermittent episodes of hypoglycemia, the disease may go undetected for a prolonged time because the symptoms are not observed by the pet owner.

The severity of clinical signs depends on how low the blood glucose gets and will often be better if the ferret has just eaten.

How is an insulinoma diagnosed?

"All too often ferrets with insulinomas have normal insulin levels at the time of sampling."

A measurement of the blood insulin level would seem to be the obvious test, but all too often ferrets with insulinomas have normal insulin levels at the time of sampling, due to the episodic nature of this condition. Therefore, it is often necessary to take several separate samples to check and recheck the blood glucose level over time. A brief fast (4 hours) may precede blood glucose testing if the ferret is well enough.

The ratio of insulin to glucose is a more useful test. If there is a high level of insulin in the face of a low glucose level, the diagnosis is definitively made.

X-rays can be performed but the tumor is not usually big enough to be seen. The spleen however, may be incidentally enlarged. Often, a tentative diagnosis is made based upon clinical signs and absence of other abnormalities on the physical examination or blood testing.

How is insulinoma treated?

Treatment of insulinomas may be medical or surgical, depending on the severity of the disease and the age of the ferret. Medical therapy involves use of a corticosteroid like prednisone and/or a drug like diazoxide to increase blood glucose levels. These medicines do not stop the progression of the tumor, but will minimize the clinical signs. Surgery remains the treatment of choice and involves removing any visible pancreatic tumor nodules. It is important to recognize that while it is easy to remove visible nodules, this disease often has multiple microscopic lesions and surgery is not always curative.

"Surgery remains the treatment of choice."

Diet must also be managed. Ferrets tend to be "grazers" or nibblers when they eat. Therefore, it is preferable to provide 4-6 small meals daily to provide a more consistent food intake, which helps level out the blood glucose levels.

If a ferret experiences a sudden collapse or a hypoglycemic coma, emergency treatment is critical for its survival. Immediately rub honey or corn syrup onto the gums (be careful if the ferret is seizuring, as there is a danger of being bitten.) If this occurs, DO NOT DELAY! Rush your ferret to the veterinarian for further supportive care and diagnostics.

Surgical treatment to remove the tumors is the optimal therapy and the largest reported series of cases to date demonstrated a mean survival time after surgery of around 500 days, which is relatively long given that affected ferrets are usually middle-aged at the time of diagnosis. Many ferrets respond well to medical therapy and dietary management. Depending upon the severity of the disease, ferrets that are managed medically can live for several months up to several years.