What does a wagging tail mean? 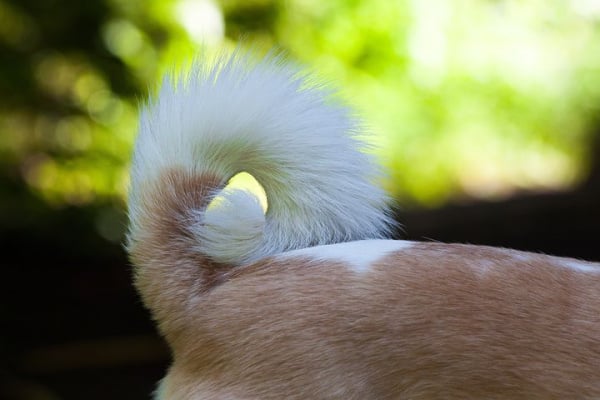 When your dog wags his tail, is he telling you that he’s happy? Not necessarily! Canines know many variations of the “tail wag” and they all mean different things. In fact, a wag of the tail is one of the best methods of communication in the canine kingdom.

Like human infants, dogs must learn their language. Pups aren’t born knowing what a wagging tail means any more than a newborn baby understands words. But when a pup is about a month old, he recognizes the need to communicate with his mother and siblings, so he picks up the lingo. The pup wags his tail to tell his littermates that he’s tired of playing or to tell his mother that he’s hungry.

Why do dogs wag their tails to communicate?

Words are the basis of human communication, so people are good listeners. Dogs, on the other hand, are watchers. Lacking a verbal vocabulary, dogs communicate broader messages with body language by taking a certain stance, moving their ears, furrowing their brow, shifting their eyes or wagging their tails.

Tail wagging works well for dogs. Since canine vision is attuned more to movement than to colors or details, dogs readily discern different tail wags. Evolution has also helped by producing tails that are more visible. Some tails have color variations such as dark or light tips, some are lighter on the underside, and some are really bushy. All of these traits accentuate the tail wag and enhance communication.

What messages does a wagging tail communicate?

Before we learn to speak “tail,” we must recognize that the neutral or natural position of a dog’s tail varies by breed. Most dogs have tails that hang down near their heels when they are relaxed. But some dogs, like Beagles, hold their tails more vertically. Others, like Greyhounds and Whippets, curl their tails under their bellies. Still others, like Pugs and Boston Terriers, have tails that coil tightly against the body and don’t wag at all.

The rate at which a tail moves adds further meaning to canine communication.

Canine “tail talk” is so complex that even the direction of the wagging is significant. Studies show that dogs wag their tails to the right when they are happy or confident and to the left when they are frightened. Interestingly, there is a scientific reason for this.

Dogs without tails communicate, but they have limitations. They may approach other dogs or people cautiously to avoid miscommunication. They depend on other aspects of body language such as ear position, facial expression, and stance to communicate their intentions.