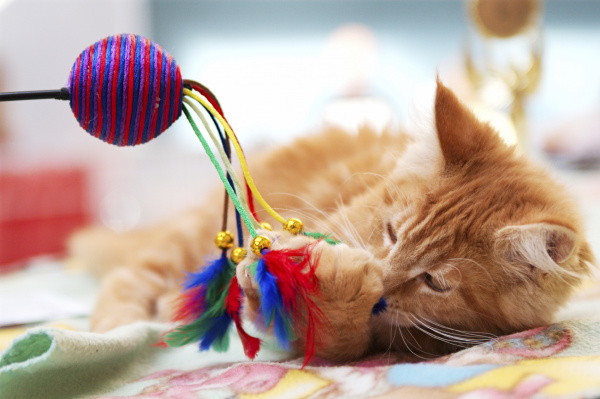 Kittens have a reputation for being playful. Why is play so important to them?

Play is a very important part of the feline world and kittens need the opportunity to play in order to learn vital adult skills both for communication and for hunting. From a very early age, they play with their littermates and with objects that they find in their environment. Indeed, play provides the ideal opportunity for kittens to investigate the world around them. Young kittens play using chasing and pouncing behaviors that seem to have their origin in predation.

"Predatory play is an integral part of feline play behavior and early learning."

Predatory play is an integral part of feline play behavior and early learning. This play in a kitten is often aggressive and intense. During kitten development three different forms of play are used. Up to the point of weaning, most of the kitten’s playful interactions have been with the queen or with littermates and this is described as social play. At the time of weaning, kittens will begin to show more interest in objects in their environment and will begin to act out the behavioral sequences associated with hunting, by chasing and stalking moving objects as well as those that can be swiped, batted and propelled with a paw. This so called object play is believed to be important in the development of eye-paw coordination and hunting skills, and the presence of an experienced hunting mother is believed to increase the kitten’s opportunity to observe the appropriate behaviors and develop its own hunting prowess. Locomotory play is fully developed at 10 to 12 weeks of age, and is important in the development of balance and agility. Since play is such an important component of kitten development, proper play and exercise should be encouraged.

I have a 6-week-old kitten that is very playful. How can I channel his play onto toys rather than the curtains and furniture?

The image of young kittens hanging from the curtains is a very popular one for cartoonists, but it is not amusing for owners when their new pets are ripping their home apart and causing mayhem. The playful nature of your kitten is perfectly normal, and the important lesson for him to learn at this age is that play is only acceptable in certain situations and contexts. Obviously, kittens cannot read labels or instruction booklets and therefore they need to be shown how to play with toys that you provide for them. However, you can maximize their interest in the toys by ensuring that they cater to basic feline needs and have features that will naturally catch your kitten’s attention and imagination. 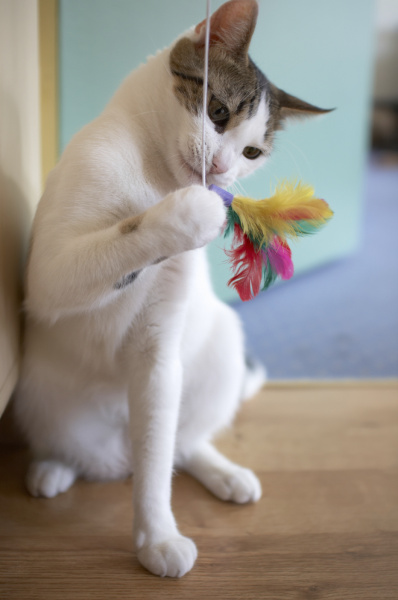 What is the best way to play with my kitten?

Kittens use multiple objects as prey items when they play. This play behavior consists of stalking, pouncing, jumping, biting, and clawing. They often prefer small objects that can easily be moved with their paws or grasped in the mouth. Avoid objects that are so small that they could be ingested and cause intestinal blockage. Some kittens like to play with objects like string or yarn. If these items are accidentally swallowed, they can cause severe intestinal damage, and you should only allow your kitten to play with them under supervision.

Avoid using your hands as you play with your kitten. This can be dangerous and lead to human injury. The moving hand can become an appealing play object and attempts at correction could aggravate the situation. Although a young kitten may not inflict damage, as it ages and continues to use the owner's body for play, serious injuries can result.

Simulated prey stimulates cats, so that wands and toys that can be pulled along or dangled in front of the cat are generally most effective. Fishing rod type toys and long wands with prey type toys (feather toys, catnip mice) on the end can be used to encourage play without contact with the owner's body. Young kittens will often fetch small fleece toys or bat them across the floor.

Why is my kitten always getting into mischief?

Another important part of the development of young animals is the need for exploration and investigation of new objects and new environments.

These behaviors can lead to damage to the home as well as injury to the kitten. Preventing these problems is quite simple; you accept your cat’s needs to play and investigate. When you are not around or available to supervise, the cat can be provided with a variety of toys that can be batted, chased or pounced upon. Toys stuffed with catnip, toys that release food when manipulated, battery operated or mechanical toys that the cat can paw or chase, and toys that can be dangled from doors or play centers are just a few of the self-play toys that are enticing to some cats. Your cat should also be provided with suitable opportunities and outlets for scratching, climbing, perching and relaxing.These could include posts and toys designed for scratching; shelves, counters, windowsills and play centers for perching; and paper bags, cardboard boxes or hidden treats for exploration. Motorized play toys can help keep your cat occupied in chase and predation games. Cats that chew and scavenge might be provided with higher bulk foods, chew toys, dental foods, dental toys or even a small herb garden to try and satisfy this need. 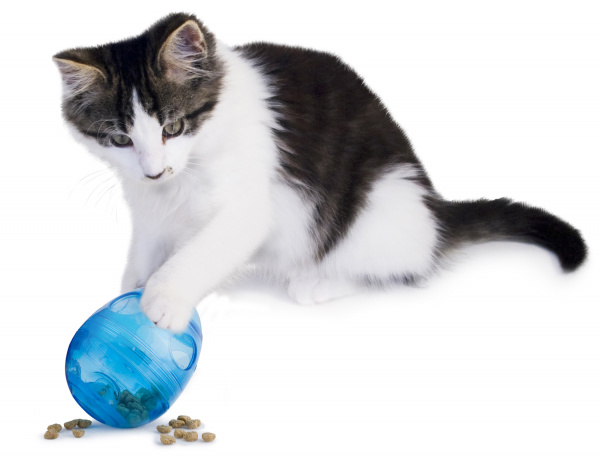 How can I prevent damage when I am not available to supervise?

When the cat cannot be supervised, leave it in a cat-proof area, with soft comfortable bedding and a litter box for elimination. Be certain that your kitten has had sufficient play and attention before confinement. Although a large dog kennel or cat crate may be an acceptable form of confinement for short departures, most cats can be confined in one or a few rooms that have been effectively cat-proofed. This allows the cat some freedom while preventing damage and injuries. Child locks and secure containers can be used to keep your cat out of cupboards or garbage cans. Any of your possessions or household objects that might be clawed, pounced on, explored, or knocked flying, should be either kept out of the cat’s reach or made undesirable. Remember that with their excellent ability to jump and climb, damage prevention may also be needed far above floor level.

Making areas undesirable can be used to teach your cat to stay away from specified areas by making the sites unpleasant. Before making an area unpleasant, be certain that some of the confinement area offers appropriate and sufficient outlets to meet your cats innate needs. The kitten should be provided with a post for scratching, some ledges or shelves for climbing and perching, and a few play toys that can be swatted, batted, or chased. Cat toys on springs and those that are hung from doors or play centers, ping-pong balls, whole walnuts, or catnip mice are often fun for cats to chase and attack. Cat play centers can be purchased or constructed to provide areas for perching and scratching in a relatively small compact area. Some cats like to explore new objects, so a few empty boxes or paper bags (never plastic) will keep some cats entertained until the owner has time to play. Sometimes the best solution is to get a second cat for companionship and play. Be certain that the second cat is young, sociable, and playful.

Although some people think of confinement, cat-proofing and make areas unpleasant as unnecessary or cruel, they are precautionary measures to keep the cat safe and prevent damage to the household when the owners are not available to supervise. Common owner complaints such as chewing on plants, scratching, climbing or playing in inappropriate locations, or elimination outside of the litter area, are just a few of the potential problems that can best be prevented with a little planning and forethought. Then, when a family member is home and available to supervise, your cat can be given more freedom to explore and become accustomed to those areas of the home where problems might otherwise occur.

What problems are associated with play?

There are a number of behavior problems that arise out of overexuberant and inappropriate play. Some examples are cats that rambunctiously tear around the household, those that swat at or pounce on the owners (sometimes escalating into bites and injuries), and those that grasp, nip, bite, or swat at the owners throughout the night.

"There are a number of behavior problems that arise out of overexuberant and inappropriate play." 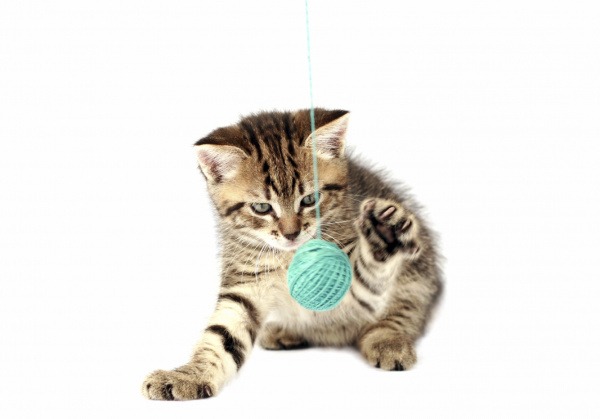 How can overexuberant play and play attacks toward people be prevented?

Before any attempts at stopping or interrupting the behavior are attempted, provide sufficient opportunities and outlets for play. Choose play toys and activities that are appealing to the individual cat. Since play that is initiated by the cat could potentially escalate into overly aggressive play, the owner should select play toys and initiate all play sessions. Sessions initiated by the cat should be ignored or interrupted using a distraction device.