What is a linear foreign body?

The term foreign body refers to any non-food object located within the digestive tract of a dog or cat. Pets have the tendency to play with or chew on non-food objects and, in the process of doing so, these objects can be inadvertently ingested. One especially dangerous type of foreign body, most common in cats, is referred to as a linear foreign body. This term describes long, thin objects such as string, yarn, and tinsel. 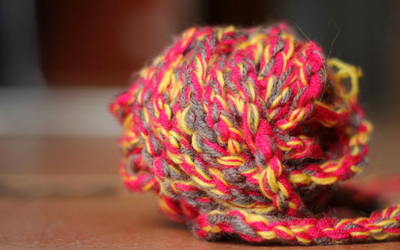 Why is a linear foreign body dangerous?

Envision a drawstring in the waistband of a pair of sweatpants; if one end of the drawstring is anchored and you attempt to pull the other end through the opening of the fabric, the fabric will bunch up around the progressively-smaller length of available drawstring, leading to folds in the fabric.

"The most significant possible complication of a linear foreign body is intestinal perforation."

What are the signs of a linear foreign body?

The most common signs of a linear foreign body include vomiting, anorexia (refusal to eat), dehydration, and lethargy. Some cats may also act painful in the abdomen, be unwilling to lay down or get comfortable, or hide more than usual.

How is a linear foreign body diagnosed?

If X-rays are not conclusive, further testing may include an abdominal ultrasound. An ultrasound gives a 3D view of the intestines and may be more effective than X-rays when looking for a linear foreign body. In addition to imaging studies, your veterinarian will likely perform bloodwork to assess your pet's overall health and rule out other causes for your cat’s clinical signs.

How is a linear foreign body treated?

If your veterinarian suspects a linear foreign body, your cat will need a surgery referred to as an exploratory laparotomy. Your cat will be anesthetized and the abdomen will be opened fully to allow surgical exploration of the abdomen. If a linear foreign body is found, the intestines will be cut open (possibly at multiple sites) to allow removal of the foreign material. If regions of intestine are perforated, or otherwise significantly damaged, these regions may be removed.

If no linear foreign body is found on exploratory surgery, your veterinarian will take biopsies of your cat's stomach and intestines to determine the cause of your cat's clinical signs.

What care is required following a foreign body removal? 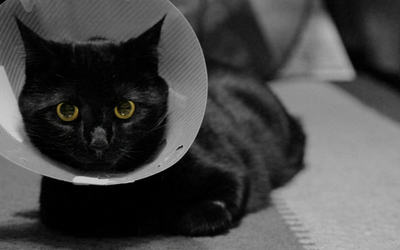 Cats typically remain hospitalized for one to three days following the removal of a linear foreign body. During this time, your cat will receive intravenous fluids for hydration and pain medications to keep her comfortable. In the first 24 hours after surgery, your cat will be fed small amounts of a bland, canned diet to help the gastrointestinal tract resume normal motility. During this period, your cat will be observed closely to ensure that there is no sign of leakage at the intestinal incisions. If your cat does well with this diet, the size of her meals will be gradually increased until she is eating normally.

"Cats typically remain hospitalized for one to three days following the removal
of a linear foreign body."

Your cat will likely be discharged from the hospital with an E-collar (cone) to prevent self-trauma to the surgery site. If this cone is removed, she may excessively lick the surgical site and interfere with healing, so it is important that the E-collar be used as recommended by your veterinarian. In addition to wearing a cone, it is also important that your cat’s activity level be restricted for the first week after surgery, in order to allow time for her incision to heal.

Your cat will be sent home with pain medication to keep her comfortable. Keeping her comfortable plays an important role in aiding her appetite; consistent eating according to your veterinarian’s instructions will facilitate gastrointestinal healing.

If you cat has skin sutures, these typically will need to be removed 7-14 days after surgery.

What is the prognosis after linear foreign body removal?

The primary risk after foreign body removal is the possibility of leakage at the incisions within the intestines. If this is going to occur, leakage is typically noted within the first 72 hours after surgery. Once a cat has passed this period, the chances of post-operative complications decrease significantly. Most cats who are doing well at 72 hours post-operatively will go on to recover uneventfully and have no further surgical complications.