What is a liver tumor? 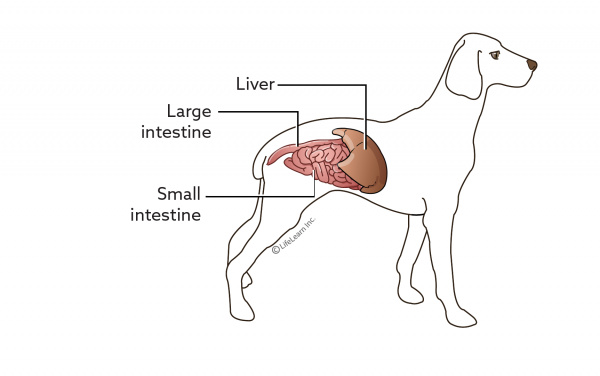 A liver tumor is an abnormal proliferation and dysregulated replication of cells within the liver. The liver is a large organ (made of several parts, called lobes) in the abdomen. It cleanses the blood and aids in digestion by secreting bile. The liver is not only made up of liver cells (hepatocytes), but also other kinds of cells, including bile duct cells, neuroendocrine (hormone-secreting) cells, and connective tissue cells. As such, there are four types of primary tumors of the liver: hepatocellular tumors, bile duct tumors, neuroendocrine tumors, and sarcomas.

Liver tumors may be either benign (non-cancerous) or malignant (i.e., cancerous, invasive, and prone to spread). Benign tumors include hepatocellular adenomas, hepatomas, bile duct adenomas, hemangiomas, and leiomyomas. Malignant tumors include hepatocellular carcinomas (HCCs), bile duct carcinomas, neuroendocrine tumors, and various sarcomas, including hemangiosarcoma, fibrosarcoma, and leiomyosarcoma, among others. Malignant tumors tend to metastasize (spread to other areas of the body). Most liver tumors in dogs are malignant, while in cats, most are benign.

Malignant tumors can present in three different ways. The tumor can be ‘massive,’ which means the cancer is a single large tumor; it can be nodular, which means there are several masses spread throughout the liver; or it can be diffuse, which means it involves the entire liver evenly.

Overall, primary liver tumors (i.e., a tumor that originated in the liver) in dogs and cats are rare. More often, liver tumors are a result of metastatic cancer, a cancer that has originated somewhere else in the body and then spread to the liver.

What causes these tumors?

The reason why a particular pet may develop this, or any other tumor or cancer, is not straightforward. Very few tumors and cancers have a single known cause. Most seem to be caused by a complex mix of risk factors, some environmental and some genetic or hereditary. In the case of primary liver tumors, there are no known causes. They tend to arise in older pets (i.e., greater than 9 years old).

What are the signs of liver tumors?

The signs of liver tumors can vary, ranging from your pet having no signs at all (being asymptomatic) to having a wide range of symptoms. You may notice inappetence, fever, lethargy, and weight loss or gain. Some pets may have nausea, vomiting and diarrhea; increased drinking and urination; and yellowing of the skin and eyes (jaundice). Occasionally neurological signs, such as seizures, disorientation, stumbling, and weakness, can be seen.

"You may notice inappetence, fever, lethargy, and weight loss or gain."

With some pets the first indication of a tumor is the sudden onset of weakness, lethargy, and collapse – the signs of tumor rupture with bleeding into the abdomen. When this happens, the gums may become pale and your pet may have difficulty breathing as blood pressure drops. This is a life-threatening emergency requiring immediate veterinary attention. 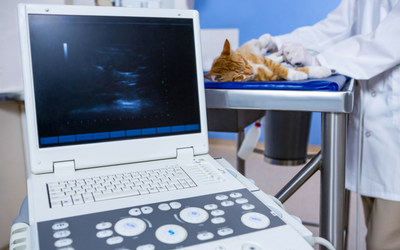 Your veterinarian may become suspicious of a liver tumor based on your pet’s history, clinical signs, and the findings of a full physical examination. With an exam and abdominal palpation, your veterinarian may find that the liver is enlarged, or find a mass or fluid in the abdomen, sometimes with abdominal pain. Sometimes the first suspicion of a liver tumor is an unexplainable rise in blood liver enzymes with blood tests repeated over time, the pet otherwise appearing normal in all ways.

Blood tests and urinalysis may be abnormal and show that your pet has signs of liver damage or bile duct obstruction (cholestasis). In the case of tumor rupture with bleeding, a low red blood cell count (anemia) will be found.

"Ultrasound can determine if the tumor is massive, nodular, or diffuse, and whether it is in more than one lobe of the liver."

Your veterinarian may want to take abdominal radiographs (X-rays) or do an abdominal ultrasound. Ultrasound is more sensitive for the detection of masses on the liver. Ultrasound can determine if the tumor is massive, nodular, or diffuse, and whether it is in more than one lobe of the liver. It can also detect the presence of bile duct or gall bladder obstruction. Occasionally more advanced imaging, such as as CT (computed tomography) scan or MRI (magnetic resonance imaging) is recommended. Some liver tumors are found incidentally (by chance) in the course of taking images for a completely different reason.

If one or more masses are found, it may be possible to obtain a sample of the tumor cells with an ultrasound-guided fine needle aspiration (FNA). This technique uses an ultrasound probe to guide a long fine needle through the skin into the tumor to retrieve a sample of cells. The cells are placed on a microscope slide and examined by a veterinary pathologist. This is called cytology.

Although cytology can be helpful, the most accurate diagnosis of a liver tumor is made with an ultrasound-guided core needle biopsy. This is a procedure in which a piece of tumor tissue is obtained by inserting a long hollow needle through the skin and into the tumor. To identify the type of cancer, the piece (or pieces) of the tumor are examined by a veterinary pathologist under the microscope. This is called histopathology. Histopathology is not only helpful to make a diagnosis but can indicate how the tumor is likely to behave.

Benign liver tumors, such as bile duct adenomas, do not spread. They generally do not cause signs of illness unless they grow to the point that they physically affect other organs or structures (e.g., blood vessels), or rupture and bleed. Liver tumors overall are fragile and may rupture at any time as they grow, potentially causing life-threatening internal bleeding.

"Liver tumors overall are fragile and may rupture at any time as they grow, potentially causing life-threatening internal bleeding."

Malignant liver tumors, such as HCCs, tend to metastasize to other areas of the body, most commonly to the nearby lymph nodes, the lungs, and the peritoneum (inner lining of the abdomen). HCCs of the massive form are locally invasive, meaning they invade the surrounding liver tissue and can become quite large. Becoming large, they can compress the main bile duct (the duct that drains bile from the liver into the intestine), the internal organs, or the large blood vessels in the abdomen, causing a variety of symptoms. Though they tend to metastasize (spread to other areas), they have a lower rate of metastasis, as compared with the nodular or diffuse forms. Without surgical removal, dogs with HCCs are15 times more likely to die of tumor-related complications.

Surgery is the treatment of choice for most primary liver tumors. Surgery can involve removal of the tumor only or removal of the affected lobe of liver (called a lobectomy). Due to the liver’s regenerative capacity, a large portion of the liver can be safely removed. Surgery offers the benefit of preventing future cancer-related complications, as well as alleviating the clinical signs.

"Surgery is the treatment of choice for most primary liver tumors."

Surgical removal of benign tumors is usually recommended. This is because these non-cancerous tumors have the ability to transform into malignant (cancerous) forms and there is a risk that the tumor will grow into a major blood vessel, with life-threatening consequences. Surgical removal of benign tumors may be curative, or at the least provide several cancer-free years.

The simplest malignant tumor type to remove is the massive form, as it is typically confined to one area of the liver.  Surgical removal of massive HCCs may be curative, even with large tumors (as they are slow to metastasize).  Nodular and diffuse forms, including neuroendocrine tumors, involve multiple liver lobes, and therefore surgery is not possible. The surgical removal of bile duct carcinomas and sarcomas is also possible, but only when they present as a single large mass. The prognosis with these cancers, however, is poor because of the high likelihood of metastasis.

The role and effectiveness of systemic chemotherapy has not been well defined with primary liver tumors. In some cases, it may delay tumor progression, and is more commonly used with HCCs and sarcomas. Neuroendocrine tumors tend to be resistant to chemotherapy. A newer form of therapy for localized, inoperable liver tumors is the use of chemoembolization. This is a process whereby a catheter is fed directly to the affected liver lobe and a type of glue and chemotherapy is injected into the blood vessels that feed the tumor to block the blood supply and help shrink the tumor. The benefit of this treatment is not yet known. Although not curative, it may increase the survival time of your pet.

The prognosis with liver tumors depends on many factors, including the type of tumor, the form (massive, nodular, or diffuse), and the presence of metastasis. Surgical removal and chemotherapy remain the primary therapeutic options depending on the tumor type. Benign tumors and massive HCCs have a good to excellent prognosis. Bile duct carcinomas, neuroendocrine tumors, and the various sarcomas have a guarded to poor prognosis.