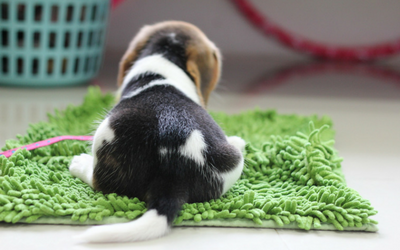 My beagle puppy stopped growing normally at just a few months of age, and then he simply seemed to suffer overall failure that ultimately resulted in the difficult decision to euthanize him. Through some special tests my veterinarian was able to diagnose what she called a “lysosomal storage disease” that disrupted his metabolism. What does this mean?

The term lysosomal storage diseases describes a group of disorders in which certain metabolic enzymes necessary for normal body functions are not produced by the body. Lysosomes are “recycling centers” in the cells, and they process the worn out materials in the cell back into substances that the cells can use. If the enzymes that are needed in order to metabolize specific substances in the cells are absent, accumulation of the unprocessed material causes tissue damage and organ system failure.

What are the symptoms of lysosomal storage diseases?

What are some specific examples of lysosomal storage diseases in dogs?

There are several formally described lysosomal storage diseases that affect dogs. Each has its own effects on the body, and each has certain breeds in which it tends to be found. These include:

These dogs lack the enzyme that breaks down a fat that otherwise accumulates in nerve cells and the liver, kidneys, and spleen. Associated symptoms include decreased vision, dementia, seizures, and balance problems. The most commonly affected breeds include Border Collies, Chihuahuas, Cocker Spaniels, Dachshunds, English Setters, and Salukis.

These dogs lack the enzyme that breaks down a molecule on the surface of brain cells. Associated symptoms include decreased vision, lethargy, weakness, dementia, tremors, incoordination, and a stiff gait. The most commonly affected breeds include Beagles, German Shorthaired Pointers, and Japanese Spaniels.

This is also known as Krabbbe’s disease and reflects the lack on an enzyme that breaks down a fat that influences nerve impulse transmission. Associated symptoms include decreased vision, tremors, incoordination, and partial paralysis. The most commonly affected breeds include West Highland White Terriers, Beagles, Blue Tick hounds, Cairn Terriers, and Poodles.

These dogs lack the enzyme needed to break down a form of sugar – glycogen – in the liver and muscles. Associated symptoms include incoordination, tremors, decreased energy, and seizures. The most commonly affected breed is the Australian Silky Terrier.

These dogs lack the enzyme that breaks down one of the building blocks of cartilage, bone, tendons, skin, connective tissues, and the corneas. Associated symptoms include weakness that starts in the rear legs and progresses to all four limbs, muscle-bone disproportion, and clouded corneas. The most commonly affected breeds include Miniature Pinschers and Plott Hounds.

This is also called glycogen storage disease and describes a deficiency in the enzyme that allows muscle cells to break down carbohydrates for energy. Associated symptoms include anxiety, incoordination, dementia, seizures, and difficulty swallowing. The most commonly affected breeds include Cocker Spaniels and English Spaniels.

Lysosomal storage diseases are rare and are inherited via recessive genes, meaning both parents are carriers. Responsible breeders eliminate these animals from their breeding programs.

Is there any treatment for lysosomal storage diseases?

Unfortunately, lysosomal storage diseases are uniformly fatal. The disorders manifest shortly after birth, progress rapidly, and the affected dogs typically die between 4 and 6 months of age. The missing enzymes are involved in basic metabolic functions, and without them the body simply cannot function and thrive. These are a devastating group of diseases, and it is fortunate that they are quite rare.