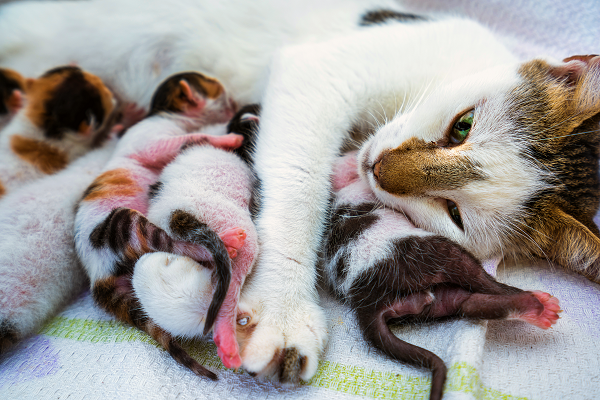 Mastitis is a term used to describe inflammation of a mammary gland (breast).

In most cases, mastitis is caused by a bacterial infection. Trauma to the nipple or teat canal can allow bacteria to enter, traveling up into the mammary gland and creating a bacterial infection. Even in the absence of trauma, a female cat living in unsanitary conditions may be exposed to large quantities of bacteria and other irritants, allowing this ascending infection to occur.

Less commonly, mastitis can be observed without evidence of infection. Trauma to the mammary gland, or prolonged periods of milk accumulation without milk removal, can lead to inflammation within the mammary gland. Mastitis is most frequently seen in the postpartum period after a cat gives birth. Many cases follow sudden weaning (which can lead to excessive milk accumulation within the gland) or the death of a kitten (leading to decreased milk removal from the glands).

What are the clinical signs of mastitis?

In mild or early cases of mastitis, the first sign of a problem may be that the nursing kittens are not gaining weight as quickly as expected. Careful examination may reveal slight swelling or inflammation of the affected mammary gland. In these stages, the affected cat often does not show any signs of illness and may show only minimal discomfort.

As mastitis progresses, the infected mammary gland will become increasingly swollen, inflamed, discolored (frequently red or purple), and painful. The mammary glands also may become ulcerated, with open wounds and scabs visible on the mammary gland. Milk expressed from the affected mammary gland may contain visible blood or pus, or milk may appear visibly cloudy or thickened in consistency.

In severe cases, affected cats may appear visibly ill. The affected mammary gland may appear dark purple or black in color, as the tissues begin to die off due to overwhelming infection and decreased blood supply. Affected cats may become lethargic, develop a fever, refuse to eat, or begin vomiting, as the infection enters the bloodstream, and they develop signs of sepsis. 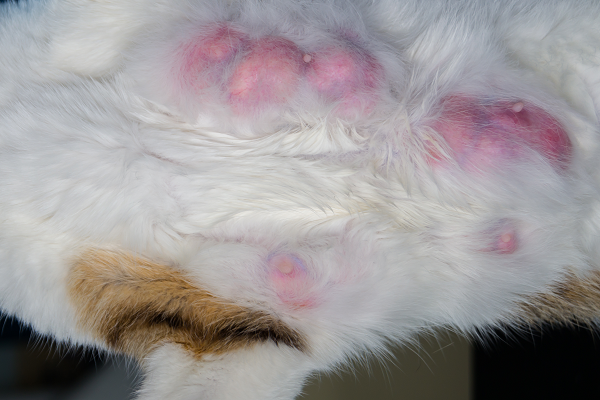 How is mastitis diagnosed?

In many cases, mastitis may be diagnosed based on physical examination alone. Occasionally, laboratory tests may be required to confirm the diagnosis and/or rule out other conditions. Laboratory tests that may be recommended for mastitis include the following:

• Milk cytology. In this test, a small sample of milk from the affected mammary gland is examined under the microscope. The presence of white blood cells (pus) or bacteria confirms a diagnosis of mastitis.

• Bacterial culture: In some cases, especially when mastitis is attributed to infection and is not responding to commonly used antibiotics, a bacterial culture may be required. Milk will be collected from the mammary gland in a sterile manner and sent to a laboratory so that the bacteria can be isolated and characterized. Once the bacteria are isolated, antibiotic sensitivity testing can be used to determine the most effective antibiotic for treatment.

How is mastitis treated?

Most cats with mastitis can be treated on an outpatient basis with oral antibiotics and pain medications. This treatment is ideal, as it allows the cat to remain at home with her kittens. Your veterinarian may recommend hand-milking the infected gland. This can alleviate discomfort, while also encouraging blood flow and promoting healing. Hand-milking should be performed every six hours.

"Most cats with mastitis can be treated on an outpatient basis..."

Severe cases of mastitis may require hospitalization for intravenous fluid therapy and injectable medications. In some cases, your veterinarian may recommend surgical removal of necrotic or severely infected glands. For this reason, it is important to treat mastitis as soon as signs are noted and give all medications as prescribed by your veterinarian.

What is the prognosis for mastitis?

Most cases of mastitis have a good prognosis. Signs typically resolve in two to three weeks with appropriate treatment. In cases of severe mastitis, or when the cat develops a systemic, blood-borne infection, the prognosis is guarded, even with aggressive treatment.