My dog was just diagnosed with megaesophagus. What does this mean? 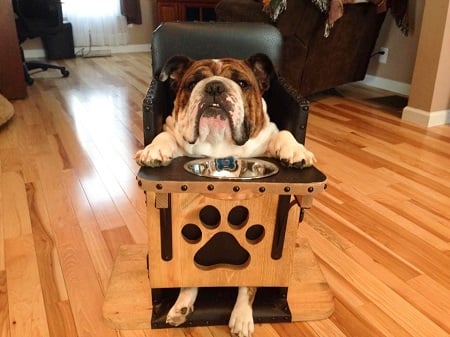 Megaesophagus is not a single disease. Instead it is considered a combination disorder in which the esophagus (the tube that carries food and liquid between the mouth and stomach) dilates (gets larger) and loses motility (its ability to move food into the stomach). When esophageal motility is decreased or absent, food and liquid accumulate in the esophagus and have difficulty getting into the stomach.

When the esophagus is functioning normally, food in the mouth stimulates nerves that send signals to the swallowing center in the brainstem which in turn stimulates the swallow reflex. There are several key locations along the various nerve pathways at which a malfunction can cause megaesophagus. Regurgitation is the most common sign of megaesophagus.

Is regurgitation the same as vomiting?

No. When a pet becomes nauseous, it will heave, gag, and retch as the contents of the stomach are actively expelled. Your pet may also drool or lick their lips prior to vomiting indicating nausea. However, regurgitation is a passive process. Food and water sloshes around in the esophagus and with the help of gravity, is released back up. There is no heaving, gagging or retching prior to regurgitation. Megaesophagus is the most common cause of regurgitation in dogs and cats.

Megaesophagus is more common in dogs than cats. It has been shown to be hereditary in Wire Haired Fox Terriers and Miniature Schnauzers. Other breeds that may be predisposed to megaesophagus are:

Siamese cats may also be predisposed to megaesophagus.

There are two types of megaesophagus. Congenital megaesophagus (born with the condition) is developmental and causes regurgitation starting at weaning when puppies and kittens begin eating solid food. Acquired megaesophagus occurs later in life, in young adults and middle-aged animals.

How is megaesophagus usually diagnosed?

Pets with megaesophagus typically regurgitate food and water. Because their food does not get into the stomach to be digested, these animals do not grow well (if young), and lose weight if they develop acquired megaesophagus as adults. They may hyper-salivate and “gurgle” when they swallow. In some individuals, you can actually see a bulging of the esophagus at the base of the neck, and touching that area may be painful. These pets may act hungry but then pick at their food to avoid the coughing and gagging they associate with eating.

Additional symptoms of megaesophagus may include:

In many cases of megaesophagus, the precise cause is never completely understood. Congenital and primary acquired megaesophagus in adults fall into this category.

Some forms of acquired megaesophagus occur secondary to another disease or condition including:

Are there diagnostic tests for megaesophagus?

"Generally, dilation of the esophagus can be seen on radiographs (X-rays)."

While there are no blood tests specifically for megaesophagus, diagnostic tests may uncover the underlying cause, if there is one. One blood screen that should be performed in a pet with megaesophagus is a test for myasthenia gravis, a failure of the nerves and muscles to communicate.

Other tests that may be considered include fluoroscopy or endoscopy to visually examine the inside of the esophagus, electrical tests to evaluate the nerve-muscle connection, a nerve-muscle biopsy, or evaluation of the cerebrospinal fluid that surrounds the brain and spinal cord. 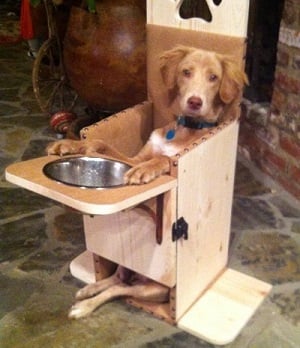 How is megaesophagus treated?

Treatment of megaesophagus depends upon the underlying cause if there is one, as well as treating any associated conditions like aspiration pneumonia. Overall treatment is focused on managing the symptoms by preventing regurgitation and allowing food to move through the gastrointestinal tract in order to be digested.

Pets with megaesophagus often need a high calorie food, and the necessary consistency of the food will depend on the patient and what leads to successful feeding. A blenderized gruel may reduce regurgitation, but may carry an increased risk for aspiration (inhaling it into the lungs). “Meatballs” of food may actually stimulate enough esophageal motility to carry the food into the stomach.

"One option is to use a Bailey chair, which is specially designed to support the pet in the correct position."

The pet should be fed in an upright position about 45 - 90° to the floor. This position should be maintained for at least 10-15 minutes after feeding. One option is to use a Bailey chair, which is specially designed to support the pet in the correct position (search “Bailey chair plans” online to find several articles and videos detailing how to build one). Pets with extreme regurgitation for whom upright feeding does not work well may need to have a feeding tube placed into the stomach. Stomach tubes are very well tolerated and completely bypass the difficulties associated with megaesophagus. The most important ongoing complication for megaesophagus patients is the risk for aspiration pneumonia.

What is the long term outlook for pets with megaesophagus?

Unfortunately, with or without treatment, most pets with megaesophagus have a poor prognosis. The potential for complications is quite high. Malnutrition and aspiration pneumonia are the leading causes of death. If megaesophagus is caused by a failure of the nervous system, there is a risk for other neurologic problems to develop. Successful treatment of underlying conditions may actually improve esophageal function. Therefore, as complete a diagnosis as possible will lead to best outcomes.