Hamsters are one of the most commonly kept family pets. There are several different breeds of hamsters, including dwarf breeds and a long-haired breed (called teddy bears), but the most common breed of pet hamster is the Syrian or golden hamster. If well socialized from a young age and treated gently, they are generally slow moving, reasonably easy to handle, and affectionate. Hamsters are nocturnal but can be active for periods during the day. They will run on exercise wheels relentlessly at night; therefore, they are not ideal pets for light sleepers. 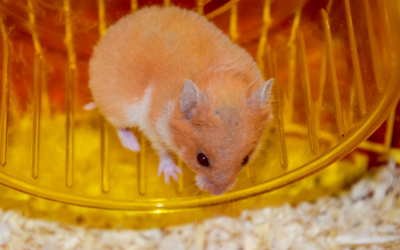 "Generally, hamsters are the most aggressive of all the pocket pets and bite more often."

Hamsters generally make good family pets but should never be left unsupervised with small children. They startle easily and become defensive when frightened. Always let a hamster know you are there before you try to touch it, or gently and slowly wake it up before attempting to handle it. Hamsters typically bite if restrained forcefully or frightened while being held. In general, the smaller dwarf hamsters are more excitable, faster moving, and more challenging to handle than the larger breeds. Generally, hamsters are the most aggressive of all the ’pocket pets’ and tend to bite more often. They do not shed a lot and seem to cause few allergic reactions in people. They are hardy, clean animals that are reasonably easy to care for.

Hamsters live, on average, 18 to 24 months (some may reach 36 months). Children should be informed of this when they get a hamster so that the ’sudden death’ of their  2-year-old pet does not come unexpectedly. Hamsters make good family pets and are suitable as a first pet for children, as long as they are supervised.

Despite their clumsy appearance, hamsters are great escape artists, since they are excellent chewers. They have large cheek pouches which they can fill with bedding material or large amounts of food that they then carry off to deposit in a corner to use or consume later. The incisors (front teeth) of all rodents grow continuously throughout the pet's life. The upper incisors are shorter than the lower incisors (about a 1:3 ratio). The molars do not grow continuously.

Hamsters have a hip or flank gland on their sides; this gland looks like a mole and is less developed in females. This gland is often mistaken for a tumor.

"Despite their clumsy appearance, hamsters are great escape artists, since they are excellent chewers."

Female hamsters produce a profuse vaginal discharge around the time of ovulation. This discharge has a pungent smell and should not be misinterpreted as an infection.

Hamsters should never be fed a strict seed diet as seeds are high in fat and poor in nutrition, and hamsters are prone to obesity. Instead, they should be offered a pelleted diet made for hamsters, supplemented with small amounts of vegetables and lesser amounts of fruit.

Hamsters are generally best housed in separate cages, as males will fight with each other, as will females, especially if they are pregnant. Females will also fight with males except around the time of breeding.

Hamsters do not tolerate heat and should be kept in a cool area in the hot summer months.

Hamsters can be adopted from shelters or purchased at pet stores or through breeders. Their eyes and noses should be clear and free of any discharge that might indicate a respiratory infection. A hamster that is sneezing may have a respiratory infection. Hamsters should be curious and inquisitive; a hamster that is sitting quietly in the corner may be sick. The hamster also should not be thin. The presence of moisture around the anus might indicate diarrhea. If possible, examine the hamster's mouth for broken or overgrown incisors (front teeth), discolored gums (they should be light pink), and any obvious sores. Finally, inquire as to any guarantee of health the shelter or seller is offering.

Your pet hamster should be examined within 48 hours of purchase by a veterinarian familiar with hamsters. This examination is often required by the shelter or seller, or any health guarantee is voided. Your veterinarian will examine your hamster, record its weight, and discuss housing, proper diet, and appropriate toys. A fecal sample also should be examined for parasites. Neutering can be discussed with the veterinarian. Hamsters do not require vaccinations. However, hamsters require, at minimum, annual physical examinations, and fecal tests to check for parasites. Older hamsters should be examined twice annually.