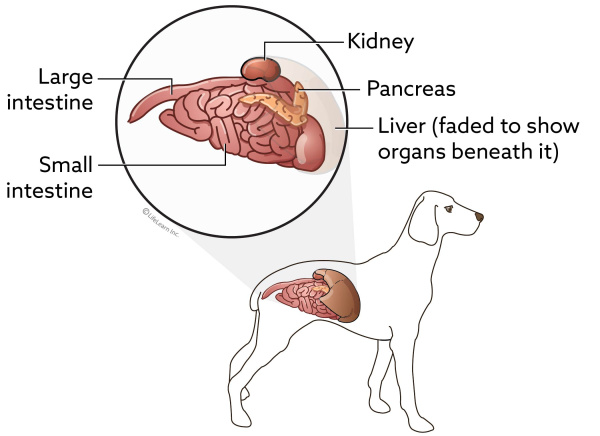 The pancreas is a vital organ on the right side of the abdomen adjacent to the stomach. The pancreas produces enzymes to assist in food digestion and hormones such as insulin, which regulates blood sugar or glucose metabolism. The digestive enzymes are secreted into the small intestine, and the hormones enter the bloodstream.

When the pancreas becomes inflamed, the condition is called pancreatitis. Pancreatitis commonly occurs in dogs. There is no age, sex, or breed predisposition. Pancreatitis may be acute or chronic.

Acute pancreatitis may either take a mild, edematous (swelling) form or a more severe, hemorrhagic (bleeding from within or around the pancreas) form. The associated inflammation allows digestive enzymes from the pancreas to spill into the abdominal cavity resulting in secondary damage to the liver, bile ducts, gall bladder, and intestines. A few dogs who recover from an acute episode of pancreatitis may continue to have recurrent bouts of the disease, which is then called chronic or relapsing pancreatitis.

The exact cause of pancreatitis is unknown, although it may be triggered in some cases by a fatty meal or corticosteroid administration. However, in many cases, it appears to occur spontaneously.

What are the clinical signs of pancreatitis?

The most common clinical signs include nausea, vomiting, fever, lethargy, abdominal pain, diarrhea, and decreased appetite. During an attack, dogs may take a 'praying position', with their rear end up in the air and their front legs and head lowered onto the floor. If the attack is severe, acute shock, severe depression, and even death may occur.

"During an attack, dogs may take a 'praying position', with their rear end up in the air and their front legs and head lowered onto the floor."

Diagnosis is generally made with laboratory testing. Tests may reveal elevations in white blood cells and/or pancreatic enzymes. In recent years, newer pancreatic tests have become available to diagnose pancreatitis more accurately. The SPEC-CPL test, which stands for Specific Canine Pancreatic Lipase test, can be run in the clinic quickly, providing a positive or negative result. See the handout “Pancreatitis in Dogs - Pancreas-Specific Lipase” for further details on this test.

Ultrasound studies often diagnose pancreatic inflammation or local peritonitis caused by this condition. Unfortunately, some dogs with pancreatitis, especially chronic pancreatitis, will escape detection with many of these tests. Consequently, the diagnosis of pancreatitis may be tentative or presumptive in some cases and based solely on clinical signs and medical history.

How is pancreatitis treated?

Successful pancreatitis management will depend on early diagnosis and prompt medical therapy. With mild, edematous pancreatitis, the treatment is supportive by 'resting' the pancreas and allowing the body to heal itself. Dogs who are vomiting should be fasted until the vomiting subsides. Food can be withheld from patients for a few days if needed. Dogs who are not vomiting may be fed a low-fat, highly digestible diet during recovery.

"Successful pancreatitis management will depend on early diagnosis and prompt medical therapy."

Analgesics will be given to control the intense pain, and intravenous fluids will be given to maintain normal fluid and electrolyte balance and perfuse the pancreatic tissues. Many cases will also require anti-inflammatory drugs or medications to control vomiting or diarrhea. Antibiotics will be administered if a concurrent infection is suspected.

Most dogs with pancreatitis are hospitalized for two to four days while intravenous fluids and medications are administered, and food is gradually re-introduced. With severe hemorrhagic pancreatitis, or if the dog shows signs of systemic shock, intensive care with aggressive doses of intravenous fluids and medications to counteract shock will be necessary.

What is the prognosis of pancreatitis?

The prognosis depends on the severity of the disease and the response to initial therapy. Dogs that present with shock and depression have a very guarded prognosis. Most mild forms of pancreatitis have a good prognosis with aggressive treatment. Dogs not treated may progress to the hemorrhagic form and suffer severe consequences, including sudden death.

Will there be any long-term problems?

Most dogs recover without any long-term consequences. However, with severe or repeated episodes of pancreatitis, one or more of the following problems may develop:

Dogs with chronic pancreatitis are more likely to develop the above secondary conditions. Management of these conditions is a significant factor in treatment success.