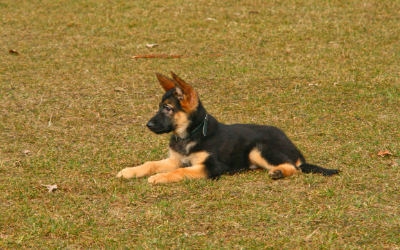 Panosteitis is a painful inflammation of the outer surface or shaft of one or more long bones of the legs. It is sometimes called growing pains. Panosteitis may occur in more than one bone at a time or may move around, causing a shifting lameness that goes from one bone or leg to another. The lameness tends to occur very suddenly and usually occurs spontaneously and without a history of trauma or excessive exercise.

Are all dogs affected with this condition?

Panosteitis is a condition that affects young, rapidly growing dogs. Although it can occur in any breed of dog, larger breeds, such as German Shepherds (most common), Great Danes, Golden Retrievers, Labrador Retrievers, Rottweilers, Doberman Pinschers, and Basset Hounds, are more prone to this problem.

"Affected dogs often have recurrent episodes of panosteitis until they reach 2 years of age, at which time it will spontaneously resolve.''

Affected dogs are usually between 5 and 14 months of age, but the first symptoms may occur as early as 2 months of age or as late as 18 months of age. Males seem to be affected more often than females, although either sex can develop panosteitis. Affected dogs often have recurrent episodes of panosteitis until they reach 2 years of age, at which time it will spontaneously resolve.

What is the cause?

Panosteitis is a painful condition, and the pain is likely caused by increased pressure within the bone, and/or by stimulation of pain receptors in the periosteum (outer, soft tissue lining of the bone). The underlying cause of panosteitis is unknown, but genetics, stress, infection, metabolism, or an autoimmune component may be factors. Since German Shepherds seem to be particularly predisposed to panosteitis, there may be a genetic component to the disease, at least in this breed. Inappropriate nutrition may also predispose some dogs to this condition. 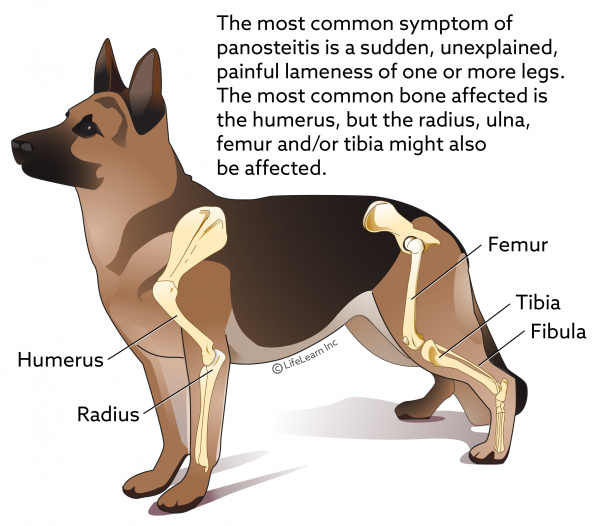 The typical symptom is a sudden, unexplained, painful lameness of one or more legs. The lameness may be mild or severe. The most common bone that is affected is the humerus (upper arm), but panosteitis may also be found in the radius and ulna (both bones in the foreleg), the femur (thigh) and/or the tibia (lower rear leg). The affected bone will be painful to the touch. Other symptoms such as fever, anorexia, lethargy, or weight loss may be noticed.

Panosteitis tends to have a cyclic nature, with periods of worsening symptoms followed by periods of improvement. The pain often shifts from leg to leg. Each episode of lameness may last for a few days to a few weeks, and the period between episodes is often about a month, but may vary.

When your veterinarian examines your dog, panosteitis will be suspected if the patient shows pain when pressure is applied to the affected bone(s). The diagnosis is confirmed by radiographs (X-rays), which usually show a characteristic increase in the density of the affected bones. The degree of change may not correlate to the severity of the lameness. In some cases, radiographic evidence may not be present for up to ten days after lameness begins; in these cases, repeat X-rays taken 2 weeks later will confirm the diagnosis. After the condition has resolved, the bone density normalizes and the bone looks normal on radiographs.

Although this disease is self-limiting, and will spontaneously resolve, during episodes of lameness the condition is very painful. At these times, treatment is supportive, using analgesics (pain medications) and/or anti-inflammatory drugs (e.g., meloxicam, brand name Metacam®) as needed.

"Pain control should always be given to help your pet feel more comfortable; denying your dog pain control is inhumane."

Pain control should always be given to help your pet feel more comfortable; denying your dog pain control is inhumane.

Some dogs with panosteitis have a poor appetite; in these cases, it is important to ensure that they are given a properly balanced and palatable diet. In some cases, supplements such as nutraceuticals, omega-3 fatty acids, or antioxidants may be helpful.

Panosteitis is a self-limiting disease, meaning that it will eventually go away. The disease should be completely resolved by the time the dog reaches 18-24 months of age. Each episode of lameness should last no longer than 3 weeks; if your pet's lameness persists without relief for longer than 4-5 weeks, it is likely that the dog is affected with another bone disorder (see handout on “Bone Diseases of Growing Dogs” for further information).

If panosteitis is a self-limiting disease, why is it necessary to perform diagnostic procedures such as radiographs?

Although panosteitis is not a serious disease, and is a common cause of lameness, other, more serious bone diseases can cause lameness in young dogs. In order to be sure that a sudden onset of lameness is not caused by one of these more serious bone diseases, radiographs must be taken. If the radiographs show the typical lesions of panosteitis, then you can rest assured that your dog will eventually outgrow the problem.

Are there any preventive measures I can take to prevent panosteitis in my large breed dog?

Although there are potential links between diets containing excessive levels of dietary protein and/or calcium, it is contraindicated to feed large breed puppies with an adult dog food that contains lower levels of protein and calcium. The reason for this is that adult dog food also has lower calories or energy levels than puppy food. Rapidly growing puppies require higher levels of dietary energy to meet the needs of growth, and will need to eat more of a low-energy food to meet these requirements. Eating more of a low energy diet will result in a higher overall intake of protein and calcium.

A better option is to feed an affected dog a high quality diet that has been specifically formulated for use in large breed puppies or adolescents, and to restrict the quantity fed to keep the dog at a lean, healthy body weight. Do not allow your puppy to become overweight. Consult your veterinarian for further advice on the most appropriate nutrition for your dog.