What is a liver shunt?

The portal vein is a large vein that collects blood from the gastrointestinal system, pancreas, and spleen and carries it into the liver, where toxins and other byproducts are removed. A liver shunt occurs when an abnormal connection persists or forms between the portal vein or one of its branches, and another vein, allowing blood to bypass, or shunt, around the liver.

In the majority of cases, a liver shunt is caused by a birth defect called a congenital portosystemic shunt. In some cases, multiple small shunts form because of severe liver disease such as cirrhosis. These are referred to as acquired portosystemic shunts.

How does a congenital portosystemic shunt develop? 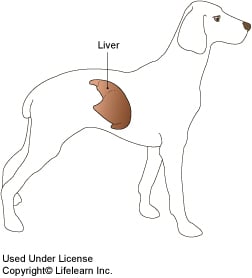 All mammalian fetuses have a large shunt called the ductus venosus that carries blood quickly through the fetal liver to the heart. A congenital portosystemic shunt develops if:

What are the clinical signs of a liver shunt?

The most common clinical signs include stunted growth, poor muscle development, abnormal behaviors such as disorientation, staring into space, circling or head pressing, and seizures. Less common symptoms include drinking or urinating too much, vomiting, and diarrhea. Dogs with a liver shunt often take a long time recovering from anesthesia. Behavioral clinical signs may only occur after eating high protein meals. Some dogs do not show signs until they are older, when they develop urinary problems such as recurrent kidney or bladder infections or stones.

How is a liver shunt diagnosed?

Diagnosis is based on medical history and clinical signs. Common diagnostic tests include:

Additional diagnostic tests may include:

What are bile acids?

Bile acids are produced in the liver and are stored in the gall bladder between meals. Normally, they are released into the intestines to help break down and absorb fats, after which they are reabsorbed by the portal system and enter the liver, where they are removed and stored again until needed. Dogs with liver shunts have increased bile acid concentrations in the blood because the liver does not get a chance to remove and store these chemicals after they are reabsorbed.

"Dogs with liver shunts have increased bile acid concentrations in the blood because the liver does not get a chance to remove and store these chemicals after they are reabsorbed."

Tests that measure the amount of bile acids in the blood are used to screen for liver shunts. To perform this screening test, two samples are usually taken. The first sample is taken after fasting (pre-prandial). The second sample is usually taken two hours after being fed (post-prandial). The actual technique may vary based on the patient and on your veterinarian's preferences.

What is the treatment for a portosystemic shunt?

Dogs with portosystemic shunts are usually stabilized with special diets and medications, which attempt to reduce the amount of toxins that are produced and absorbed in the large intestines. Dogs that are severely ill may require intravenous fluids to stabilize blood sugar, an enema to remove intestinal toxins before they are absorbed and medications, such as diazepam (brand name Valium®) to stop seizures.

What is the prognosis for a dog diagnosed with a portosystemic shunt?

Most dogs improve almost immediately with proper diet and medication. About one-third of the dogs treated medically will live a relatively long life. Unfortunately, over half of the dogs treated medically are euthanized within ten months of diagnosis because of uncontrollable neurological signs such as seizures, behavioral changes, or progressive liver damage. Dogs that tend to do well with long-term medical management are usually older at the time of diagnosis, have more normal blood test values and have less severe clinical signs.

Dogs with a single shunt, especially one that is extrahepatic, have an excellent prognosis if surgical correction is performed.

What does portosystemic shunt surgery involve?

How successful is surgical treatment?

Surgery provides the best chance for a long, healthy life in most dogs with extrahepatic shunts. If ameroid constrictor placement is performed, survival rate is over 95%. Many dogs are clinically normal within four to eight weeks following surgery. A small percentage of dogs will develop multiple acquired shunts and must be managed with a protein-restricted diet and lactulose for life.

What is involved in the post-surgical management of portosystemic shunt patients?

It is important to feed your dog a protein-restricted diet for minimum of six to eight weeks. After blood test values return to normal, your dog may return to a high-quality maintenance diet. Lactulose is usually given for several weeks after surgery.

"The liver will begin to grow as the shunt closes and will often be normal size and function in two to four months."

The liver will begin to grow as the shunt closes and will often be normal size and function in two to four months. Blood tests will be repeated at regular intervals to evaluate liver function.