Pulmonary Thromboembolism (Blood Clots in the Lungs) in Cats

What is a pulmonary thromboembolism? 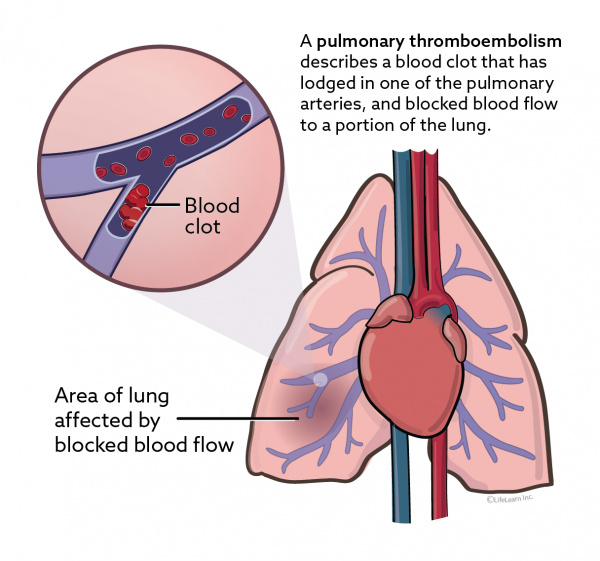 Pulmonary means lung, and the word thromboembolism describes an obstruction of a blood vessel by a blood clot that has become dislodged from another site. A pulmonary thromboembolism (PTE) describes a blood clot that has moved through the blood vessels, lodged in one of the pulmonary arteries, and has blocked blood flow into the portion of the lung served by that artery.

This seems to be more common in cats less than 4 years or age or older than 10 years of age. No sex or breed tendency has been found.

What are the typical signs of pulmonary thromboembolism?

The signs of pulmonary thromboembolism include:

Your veterinarian may find several important clues pointing to a pulmonary thromboembolism during a physical examination. Your cat may have a very rapid heart rate with weak pulses and she may have a heart murmur. Her gums may be pale or even bluish from a too low oxygen level in the blood. When your veterinarian presses on the gums to push away the blood, it may take longer than normal for the small blood vessels to refill with blood.

What could have caused my cat to have a pulmonary thromboembolism?

There are many important considerations and potential causes of PTE in cats. Feline heartworm disease is one potential cause, emphasizing the need to provide appropriate monthly protection against heartworm disease with preventative medication. Other important potential causes of feline thromboembolism include cancer, excessive levels of steroids produced by the adrenal glands in Cushing’s disease, steroid medications, and kidney disease in which protein is lost into the urine.

Other potential causes of pulmonary thromboembolism include:

How is pulmonary thromboembolism in cats treated?

Many cats with thromboembolism are first treated as inpatients until the oxygen levels in their blood returns to normal. Oxygen therapy may be a part of their treatment, but response to oxygen therapy may be variable. Once your cat returns home, it is important to restrict activity in order to prevent fainting, and the low oxygen levels in the blood from declining further.

"Many cats with thromboembolism are first treated as inpatients
until the oxygen levels in their blood returns to normal."

There are some medications available for treating this disorder. Heparin is a medication to prevent blood from clotting (anticoagulant) that may help to prevent future clots from forming, but will not cause existing clots to break up. Warfarin is another anticoagulant that may be considered for long-term treatment. With it, dosage adjustments are necessary to keep blood clotting at a specific level, and carefully balancing the risk of further clots with the risk of bleeding complications is needed to prevent development of further clots.

Anti-platelet medications, such as clopidogrel (brand name Plavix®) are also sometimes used as a preventive medication in cats with disorders that might put them at increased risk for developing PTE.

Medications to dissolve existing clots (thrombolytic drugs) have been tried in cats but have been associated with increased complications and death.

What kinds of monitoring and follow-up will my cat need?

Monitoring oxygen levels in the blood through pulse oximetry (a non-invasive sensor used on the outside of the body) allows for tracking of improvement in breathing function. Blood tests to check blood clotting status will be needed for adjusting the dose of warfarin. Bleeding complications may arise in pets treated with anticoagulant medications.

What is the outlook for my cat?

Future episodes of pulmonary thromboembolism are likely unless an underlying cause is identified and corrected. These blood clots are often fatal, and sudden death is not unusual. Treatment with anticoagulant medications can lead to bleeding complications, necessitating frequent re-evaluation of clotting times, and these medications may be required long-term.