Boas are a group of medium to large sized, non-venomous snakes found in South and Central America, Madagascar, Papua, and the Pacific Islands. Pythons are a group of non-venomous snakes found in Africa, Asia, and Australia. Some members of this family are among the largest snakes in the world. Boas and pythons kill their prey by constriction (they coil their muscular bodies around their prey and tighten their muscles to crush and kill).

They are popular vivarium (natural habitat) reptiles, and most species have few problems in captivity if they are housed at the correct environmental temperature and humidity, and are fed appropriate prey. They need an enclosure that is large enough for them to stretch out. As long as an owner is prepared for the large size and longevity of these animals, these animals can be rewarding pets.

The following is a brief description of a few boas and pythons commonly kept as pets.

Red-tailed boas (Boa constrictor) originate from Central and South America. These snakes can grow to 4 meters (13 feet) long on a diet of rodents, chickens, and rabbits for very large snakes. These prey items may be fed to pet boas but should be offered frozen and then thawed, or freshly killed. Living prey can bite and scratch snakes and inflict serious injury and should not be offered to pet snakes. Females are generally larger than males. In the wild, boas spend much of their time in trees; therefore, in captivity they need a tall vivarium with plenty of access to branches for climbing. Boa constrictors may live 20-30 years, and some up to 40 years. They reach sexual maturity once they reach about 1.5 meters (5 feet) in length. Boas are viviparous (give birth to live young rather than laying eggs) about 6 months after mating. Right from birth, babies are able to eat mice. When housed at the temperature and humidity appropriate to their species, boas can thrive in captivity and can become quite tame if handled properly. 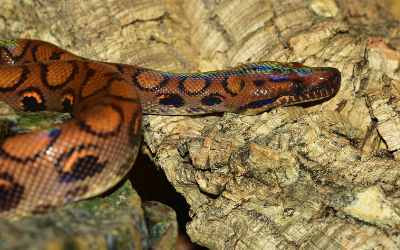 Found in the wild in Central and South America, Epicrates cenchria is, as its common name suggests, one of the most colorful of the boas, especially immediately after shedding. The subspecies from Brazil is predominately red, while others tend to be brown. Gestation in this breed is about 5 months, and babies are born live. Adults reach up to 2 meters (6.5 feet) in length, depending on the subspecies. This species does best in an environmental temperature of 24-30°C (75-86°F) and a relative humidity of 70-80%. Rainbow boas in the wild predominantly eat small mammals and birds.

This species, Python molurus, is the classic Old-World constrictor equivalent of the red-tailed boa, in that it can grow to be quite large. While New World boas grow up to 4.3 meters (13 feet) long, pythons may reach up to 6.5 meters (21 feet) long. Their diet consists of large rodents, rabbits, and chickens. In captivity, these pythons are often overfed and become obese. A python that is fed weekly but does not have to hunt for its dinner may become so overweight that its intra-coelomic (internal) fat stores become very large, and its liver and kidneys become infiltrated with fat, preventing normal function. Female pythons are stimulated to breed by a reduction in light and day length. Their eggs are laid approximately 3 months after mating. Females incubate up to 100 eggs for around 70 days until the eggs hatch. The young will shed soon after, and following that initial ecdysis (shedding of the skin), they will eat. Within 18 months they are considered mature. 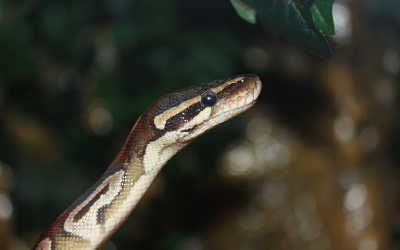 The royal python, Python regius, originates in Africa and is also known as the ball python, since it curls into a ball to protect its head with its stocky, muscular body when it is threatened by predators. This snake is relatively small and is very attractive, but ball pythons are challenging to keep as pets, as they are very timid, docile snakes that often go long periods without eating. Adults generally do not grow to more than 90-150 centimeters (3-5 feet) in length. While mice are a preferred food, ball pythons sometimes do not recognize white laboratory mice as prey. In such cases, brown gerbils may be offered to encourage the snake to break its fast.

Probably the world's longest snake (up to 30 feet or 9 meters), Python reticulatus, has a striking series of diamond-shaped yellow patches down its back and flanks marked with brown, black, cream, and purple. While they are very beautiful snakes and are popular as pets, they should only be kept by a skilled and experienced reptile keeper, as they can be unpredictable and may strike unexpectedly. Because they grow so large, they also can be difficult to handle safely. These snakes feed on larger rodents and rabbits.