Testing for Heartworm Disease in Dogs 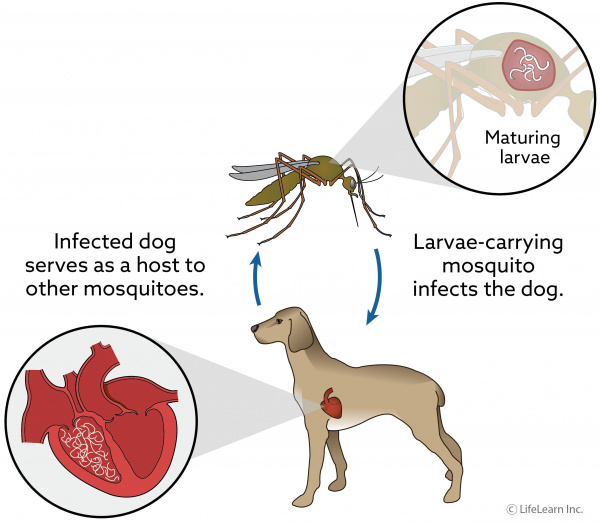 What is heartworm disease? How does a dog become infected?

Heartworm disease is caused by a parasite called Dirofilaria immitis, better known as heartworm. The parasites are long, hair-like worms that live in the right ventricle of the heart and the pulmonary artery, which is the large blood vessel that carries blood from the heart to the lungs. Dogs become infected when they are bitten by an infected mosquito that is carrying immature, infective heartworm larvae.

"Dogs become infected when they are bitten by an infected mosquito that is carrying immature, infective heartworm larvae."

The larvae pass from the mosquito into the dog and move through the tissues of the body, eventually entering the bloodstream and migrating to the right ventricle of the heart. Within the heart, the worms mature into adults, mate, and produce immature worms called microfilariae, which circulate in the bloodstream. When the infected dog is bitten by another mosquito, the microfilariae are taken up by the mosquito. Inside the mosquito, the microfilariae develop to become infective larvae. These infective larvae move into the mouth parts of the mosquito, where they wait until the next time the mosquito bites a dog. It takes about 5 - 6½ months for the heartworm life cycle to be completed.

Where is heartworm infection most common?

Heartworm disease is widespread in the United States and is particularly common along the southeastern and gulf coasts, and through the Mississippi River valley. In Canada, heartworm infection is more restricted and is localized to southern Ontario, southern Manitoba, and southern Quebec, with scattered occurrences elsewhere in the country.

Can infection be spread directly from one dog to another, from dog to cat, or from a dog to a person?

What are the clinical signs of heartworm disease?

In the early stages of disease, dogs often have no clinical signs, especially if they are carrying only a small number of worms.

As the disease progresses, clinical signs become more noticeable and include reluctance to exercise, rapid fatigue with exercise, coughing, and sometimes collapse. In advanced disease, dogs develop congestive heart failure. Dogs in congestive heart failure lose weight, have a poor body condition, breathe rapidly or with difficulty, and develop a build-up of fluid in the abdomen.

How is heartworm disease diagnosed in the dog?

Heartworm disease is usually diagnosed with a simple blood test. There are two main tests for detecting heartworm infection; one test detects adult worms and the other detects microfilariae.

Testing for Adult Worms: The American Heartworm Society recommends using the Heartworm Antigen Test as the primary method of testing for adult heartworm infection. This test is specific for adult female heartworms. Antigen is detectable by 6½ to 7 months after infection and positive results may be obtained with as few as 1 to 3 adult females in the heart.

Antigen tests will be falsely negative if:

Microfilaria tests may be falsely negative for several reasons including:

What about the DNA-PCR test?

This test, which detects the DNA of the heartworm, is not yet sensitive enough to screen dogs for heartworm infection. However, if microfilariae are found and there is any doubt about their identity, then the DNA-PCR is helpful to confirm that they are Dirofilaria immitis and not another kind of blood parasite.

What other methods are used to detect heartworm infection?

In some infected dogs, the blood tests are negative even though there are heartworms in the heart.

Other blood tests (CBC, blood chemistries, electrolytes). Abnormalities on the complete blood count (CBC) and blood tests for kidney and liver function may suggest the presence of heartworm disease. These tests are often performed on dogs diagnosed as heartworm-infected, to assess organ function and health status prior to treatment.

Radiographs (X-rays). A radiograph of a dog with heartworms will usually show heart enlargement and swelling of the large artery (pulmonary artery) leading to the lungs from the heart. These signs are considered presumptive evidence of heartworm disease. Radiographs may also reveal the condition of the heart, lungs, and pulmonary vessels. This information allows us to predict an increased possibility of complications related to treatment.

Electrocardiogram (EKG or ECG). An electrocardiogram is a tracing of the electric currents generated by the heart. It is most useful to determine the presence of abnormal heart rhythms. This test can also detect enlargements in heart chamber size and help determine if a dog can safely undergo heartworm disease treatment.

Echocardiography (ultrasound of the heart). An ultrasonic examination shows the heart chambers allowing the general status of the heart to be evaluated. Heartworms can also be visualized within the heart and pulmonary artery.

Do all dogs need to be tested?

No. Puppies less than 6-7 months of age do not need to be tested. Adult worms are not present at this age and both antigen tests and microfilariae tests will be negative.

Is there treatment for heartworm disease?

There are frequent side effects associated with heartworm treatment due to dead worms being pumped out of the heart into the lungs. Side effects are more common in dogs with large numbers of adult heartworms but all infected dogs are at risk. In order to minimize side effects, all dogs undergoing treatment, even if they are not showing signs of illness, must be kept very quiet during the treatment period and for 4 weeks afterwards. Other drugs such as anti-inflammatory medication, antihistamines, and antibiotics (e.g., doxycycline) may be used to reduce side effects and improve response to treatment. If serious complications arise, hospitalization for further treatment may be needed. For further information on treatment, please see our handout “Heartworm Disease in Dogs - Treatment”.

How can I prevent heartworm disease in my dog?

Annual heartworm testing followed by preventive medication is recommended to keep your dog free of heartworm disease. Several excellent preventive products are available to prevent heartworm disease in dogs. Your veterinarian can advise you on which product is most suitable for your pet, and whether year-round treatment is necessary. Dogs in subtropical United States are at risk for heartworm year-round, while dogs in Canada, northern United States, and Alaska are most at risk during the warmer months (late spring to late fall). Dogs from lower risk areas that travel into high risk areas should be on preventive medication during the travel period regardless of the time of year.