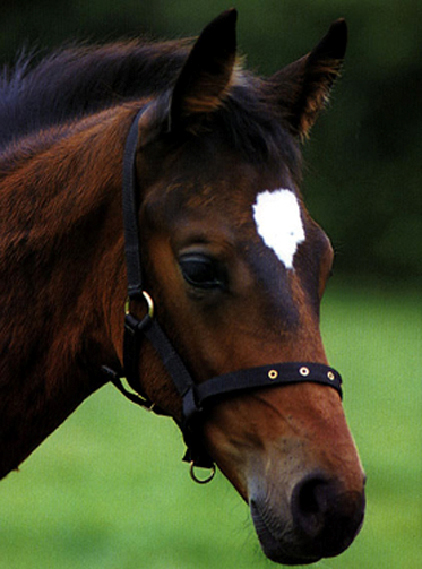 Tetanus is a bacterial disease that can affect most animals and humans. Horses are particularly susceptible because of their environment and tendency to suffer injuries. Sadly, infected horses and ponies usually die or require euthanasia.

Tetanus is caused by the bacterium Clostridium tetanii that can be found in soil and droppings just about everywhere. It survives in the environment for long periods of time. It enters the body through wounds, particularly puncture wounds if the wound is dirty. Puncture wounds on the sole of the foot are common sites of infection. Infection can be acquired via the intestines, after eating contaminated soil or droppings, through gastric or intestinal ulcers. In foals, infection can occur via the umbilicus (navel).  The tetanus bacteria do not need oxygen (they are classified 'anaerobic' bacteria) and multiply rapidly in the damaged tissues at the site of the injury. They produce a toxin (tetanus toxin) and it is this potent neurotoxin that causes the classical signs of tetanus. 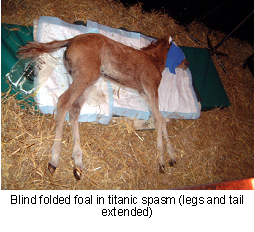 Tetanus toxin attacks nerves controlling the muscles of the body. This causes progressively worsening muscular stiffness and spasm. The affected horse will become stiff and have difficulty moving and eating. The third eyelid (membrana nictitans, a membrane that can be easily seen at the inner corner of the eye) starts to protrude across the eye, particularly if the horse is startled. The tail is often held out straight and the horse develops an anxious expression because of facial muscle spasm. Any stimulus such as loud sound, bright light or touch can exacerbate the signs. The horse may sweat. In advanced cases the horse will collapse with spasms, convulsions and death from respiratory failure. In the early stages, tetanus can look like some other conditions such as hypocalcaemia (lactation tetany) or severe myositis (tying-up).

Can tetanus be treated?

Most cases of tetanus result in death of the affected animal. If diagnosed early, treatment is aimed at destroying the bacteria so that no more toxin is produced and reducing the effects of the toxin that has already been produced. Large doses of antibiotics, usually penicillin, are used in conjunction with tetanus antitoxin injected usually intravenously and intramuscularly. Occasionally antitoxin has been injected into the space around the spinal cord (subarachnoid space).  Good nursing is essential and the horse needs to be in a darkened, quiet stall to reduce muscular spasm and anxiety. If the horse is able to eat, food should be offered at a height where it can easily reach it. In severe cases, slinging may be necessary. This involves suspending the horse's weight by using a wide leather or cloth strap from the ceiling or other support. Intravenous fluids and/or catheterization of the bladder may also be necessary. Unfortunately, the chances of recovery are extremely poor if such measures are necessary and euthanasia on humane grounds is usually more appropriate.

How can tetanus be prevented?

Tetanus is an easily preventable disease. Vaccination with 'tetanus toxoid' should be used for all horses and ponies. The initial course consists of two injections given approximately four to six weeks apart followed by a booster at one year and further boosters annually. If your horse is unvaccinated and is wounded, tetanus antitoxin, followed by toxoid should be given as soon as possible, even at the same time.

Foals can be protected during their first few weeks of life by booster vaccinating their pregnant dams approximately one month prior to foaling. This produces useful levels of specifically protective antibody in their colostrum for the foal to suck and absorb. Under circumstances of intensive foal management and if the mare is unvaccinated, tetanus antitoxin should be given to the foal soon after birth and again at three to four weeks of age. Foals cannot respond to vaccine given before approximately four months of age but should start a course of vaccine (toxoid) soon after this.

Good first aid can help prevent tetanus too. Wounds should be cleaned as soon as they occur and steps should be taken to encourage drainage of deeper injuries e.g., by poulticing. Paddocks, stables and stable yards should be kept safe, clean and clear of dangerous items such as old tractor parts, corrugated iron sheets and building materials that may cause injury.