What is it TTouch? 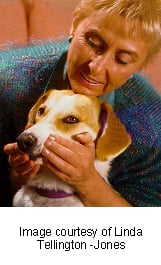 TTouch is a form of touch therapy devised and popularized in 1978 by Linda Tellington Jones, an equestrian with a long-standing interest in massage, training, and rehabilitation therapy techniques. TTouch is a very simple light massage technique, in which a clockwise circular motion of the fingers is used on the skin of the patient. TTouch is marketed as a means of counteracting reflexive adverse behaviors in animals, and was initially developed to facilitate the training of horses. For a fee, one can obtain certification in TTouch animal training approaches through books and specialized TTEAM courses offered by Linda Tellington Jones' organization at www.tellingtontouch.com.

"...they will...be more amenable to learning new behaviors and tasks."

The specific hand movement described above is considered by Tellington Jones to be a non-habitual stimulus to animals that raises the animal's awareness of their immediate environment enough that they will cease to respond reflexively to the handler and be more amenable to learning new behaviors and tasks. Developers of TTouch assert that this change of consciousness is produced and attended by a change in brain wave activity, although this claim has not been independently verified in the scientific literature.

TTouch has become popular among certain nurse practitioners as a technique to calm human patients down and promote relaxation. A study has recently been published in the scientific literature showing a statistically significant improvement in blood pressure, heart rate, and the perception of pain in 46 adult humans prior to venipuncture (taking blood from a vein), compared with 47 adult humans receiving no pre-procedural touch therapy. A fourteen-day joint study by Linda Tellington Jones and the K.I. Skyrabin Moscow Veterinary Academy in 1985 is reported to have demonstrated reduced adrenaline secretion in horses receiving TTouch relative to untouched controls. The horses receiving TTouch were later described as demonstrating enduring improvements in training and performance.

On which species of animals is TTouch practiced regularly?

TTouch was originally developed to address equine behavior and training problems, but has been applied to many other species, including dogs, cats, and humans. It has also been explored for use in zoo animals.

Who practices TTouch and do I need a referral?

Veterinarians and lay people trained in TTouch offer this therapy. TTouch practitioners are certified through a specialized course offered only through Tellington Jones, known as TTEAM.

What conditions are most often treated with TTouch?

Any behavior problem can be considered a candidate for TTouch.

The technique is especially designed to address anxieties, phobias, fear aggression, aversion to touch, and any other conditioned fear response. When TTouch is effective, a pet may be expected to be more tolerant of stressful but normally painless handling procedures, such as nail trimming.

How successful is TTouch?

Effectiveness of TTouch varies depending on the training of the practitioner, the animal receiving treatment, the condition that is being treated, and the regularity and consistency with which TTouch is applied. When the circumstances of training are ideal, veterinarians claim that TTouch is very successful in relieving anxiety in most pets.

How safe is TTouch?

TTouch is very safe. There are no known side effects.

Can TTouch be combined with traditional or other forms of alternative veterinary medicine?

TTouch can be combined with any other alternative veterinary therapy used to assist in the management of anxiety related disorders in animals.