Why is finding protein in my pet’s urine a cause for concern? 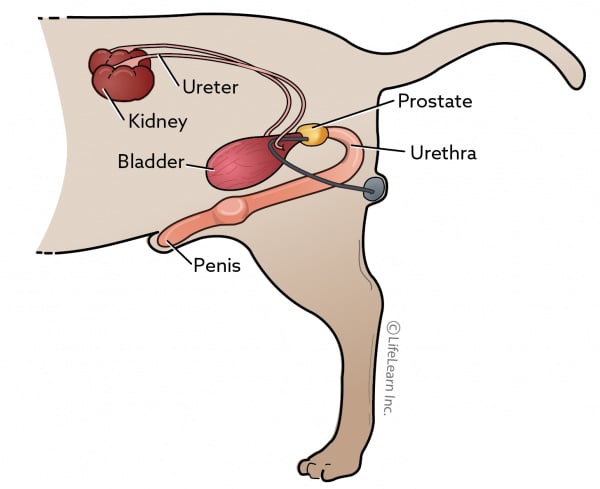 Protein is a precious resource for the body, and the kidneys have an important role to prevent it from being lost in the urine. The presence of protein in urine is called proteinuria, and it may indicate that the kidneys are not working properly. In some situations, it may even be a sign of kidney failure.

Is proteinuria always a sign of serious kidney disease?

No. Proteinuria can occur for a variety of reasons other than serious kidney disease. In fact, bleeding or inflammation in the urinary system is a far more common cause of proteinuria. In these cases, the bladder and lower urinary passage (the urethra) are usually involved, but the prostate gland (in males), or vagina (in females) may also contribute.

"Proteinuria can occur for a variety of reasons other than serious kidney disease."

Proteinuria caused by bleeding or inflammation usually disappears once the underlying disorder is treated.

If proteinuria is not due to inflammation or bleeding in the urinary system, then it is more likely to be a sign of true kidney disease. This is worrisome because the underlying disease is often complex, difficult to diagnose, and hard to treat. Further investigation is always recommended.

What tests are required to determine the origin and significance of proteinuria?

The first test is a complete urinalysis, including sediment evaluation (see handout "Urinalysis"). This test provides a preliminary measurement of how much protein is in the urine and determines if there is substantial inflammation or bleeding that could explain the proteinuria.

What can be done if the urinalysis reveals proteinuria with signs of bleeding and inflammation?

If the urinalysis reveals inflammation or bleeding, your veterinarian may recommend further testing to look for conditions such as bacterial infection, bladder stones, prostatic disease (in male dogs), vaginitis (in females), and cancer, etc. Following treatment, a repeat urinalysis is recommended to determine if the inflammation, bleeding, and proteinuria have disappeared.

What if proteinuria is present without inflammation or bleeding?

If proteinuria is present and there is no sign of inflammation or bleeding, then serious kidney disease may exist. The best test to determine the severity of the problem is the urine protein:creatinine ratio (see handout "Urine Protein:Creatinine Ratio"). A protein:creatinine ratio that remains persistently high is a reliable indicator of serious kidney disease and possibly kidney failure. Further investigation is recommended and could include doing blood tests to assess kidney function, testing for bacterial infection or infectious disease, performing an ultrasound of the kidneys and possibly doing a kidney biopsy. Once a diagnosis has been made, effective management of the problem may be possible.