Whistling and Roaring in Horses

The terms 'whistler' and 'roarer' are used to describe horses that make an abnormal respiratory noise during exercise. The noise is heard during inspiration (i.e., breathing in) and may be anything from a high pitched soft whistle to a harsh 'roar'.

What causes the noise? 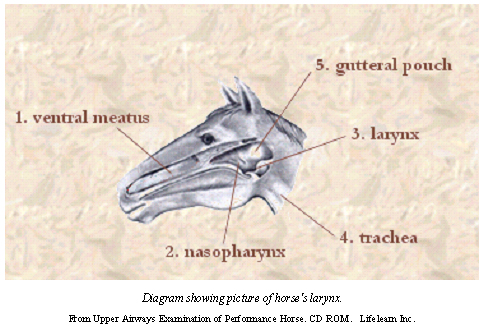 With each breath, air is taken in through the nostrils and passes via the nasal passages to the throat (pharynx), which is a dynamic and muscular tube. From here it passes through a cartilaginous valve, the larynx, before entering the windpipe (trachea) and lungs. During exercise, the nostrils dilate and the horse extends its head and neck, further opening the pharynx and larynx to take in more air. Anything that interferes with the smooth passage of this increased airflow may result in the horse making an audible noise and performing poorly.

Laryngeal hemiplegia (one-sided paralysis) is the most common cause of horses making abnormal noises during inspiration at fast exercise. The noise is caused by partial or total paralysis of one (usually the left) side of the larynx. The condition occurs mainly in larger horses with long necks, because it is thought that this conformation can predispose to injury to the long nerve (recurrent laryngeal nerve) that opens and closes the left side of their larynx. Nevertheless, it can be seen in smaller horses and ponies, either spontaneously or following a perivascular injection or other injury to the nerve.

In mild cases the noise may only be heard during strenuous exercise but in severe cases the noise may be heard even during trotting. Exercise intolerance (i.e., getting tired quickly) may be a feature of the disease as the horse often has difficulty inhaling enough air through the incompetent larynx. The condition is usually progressive and worsens with time. In a horse with severe paralysis, the laryngeal airway may collapse during strenuous exercise causing severe respiratory embarrassment.

How can the diagnosis be confirmed?

Your veterinarian will listen to your horse exercising on the lunge and, if necessary, while ridden at fast exercise, in an attempt to hear an abnormal inspiratory noise. This will usually be followed by an endoscopic examination, i.e., a flexible endoscope is passed through the nose, into the pharynx, to look at the larynx as the horse breathes. Both sides of the larynx should open and close completely, symmetrically and in synchrony. In an affected horse, usually the left side of the larynx moves sluggishly and incompletely, 'hanging' into the larynx and obstructing air flow. In the most subtly affected horses, an endoscopic examination may need to be performed while the horse is exercising on a high-speed treadmill, in order to confirm the diagnosis. To make matters more confusing, the endoscopic appearance of the larynx of some horses appears to vary from time to time, for these, multiple examinations may be required with opinions from more than one experienced veterinarian, before a final diagnosis can be made.

What treatment is available? 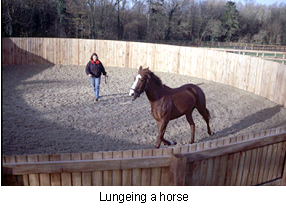 In moderately affected cases, a surgical procedure may help although the paralysis as such is incurable. The most simple operation that is known as "Hobday's operation" involves the removal of a piece of laryngeal tissue (laryngeal ventricle and vocal cord) which streamlines the laryngeal airway, improving the passage of air. Although this is conventionally carried out with the horse under a general anesthetic, it can also be performed with the horse in the standing position, under a local anesthetic using a laser.  In more severe cases, this relatively simple operation is much less effective and a 'tie-back' operation is often recommended. This more elaborate operation places special sutures in the paralyzed side of the larynx to pull and hold it open. A 'Hobday' operation is often performed at the same time so that the resulting internal scar additionally helps to hold the paralyzed side open, even if the sutures fail to retain their strength over time.

In a horse in which a "tie back" has failed, or is not an option for other reasons, a brass or plastic tracheotomy tube may be inserted into the windpipe to allow air to bypass the larynx completely. The tracheotomy tube and wound must be carefully managed and removed and cleaned daily, to prevent infection and secondary complications. The tube is very visible and many people understandably find it unacceptable for aesthetic reasons. More importantly it is not a very aerodynamic solution to this tricky problem.

What other conditions cause horses to make abnormal noises during exercise?

There are several other conditions that may cause a horse to make an abnormal inspiratory noise.

1. Lymphoid hyperplasia is a term used to describe a condition where lymphoid (immune) tissue lining the pharynx becomes inflamed and nodules form. It is a condition affecting young horses and most cases improve with age.

2. Soft palate displacement is a disease that usually affects racehorses and causes a "gurgling" noise and severe exercise intolerance usually near the end of a race. It can be difficult to confirm endoscopically and requires examination during treadmill exercise. A variety of surgical treatments are available for this frustrating condition but most of them only carry a modest success rate.

3. Cysts (fluid-filled sacs) may form beneath the epiglottis. The epiglottis is a triangular cartilage at the base of the larynx that usually sits on the floor of the pharynx during breathing. Its job is to prevent food material from going down 'the wrong way' i.e., down the wind pipe. If a cyst forms under it, the epiglottis is pushed up and it obstructs the opening of the larynx causing a noise. Large cysts require surgical treatment to remove them.

4. Infections, tumors etc., in the nostrils or nasal passages may result in the horse making an abnormal noise.

5. Epiglottic entrapment is a term used to describe a condition where the epiglottis is trapped under an abnormal fold of tissue that causes a noise. Treatment consists of cutting the abnormal tissue and is performed with the horse either standing under a local anesthetic or under general anesthesia.

6. Congenital problems are conditions of the pharynx and larynx that are present from birth. An abnormally narrow pharynx may narrow the airway and may result in a horse making an abnormal noise. Abnormalities causing displacement of supporting structures of the pharynx may have a similar effect. In general terms, these conditions cannot be treated.

What should I do if I think my horse is a whistler or roarer?

If your horse has started to make an abnormal noise while breathing, you should ask your vet to examine it. Your veterinarian will need to hear the noise so it will be necessary to ride or lunge the horse. After performing a general clinical examination, to help rule out other illness, an endoscopic examination should reveal most of the conditions described above and is the best way to diagnose diseases of the nasal passages, larynx, pharynx and windpipe. In cases that are marginally affected or where the diagnosis remains unclear, it may be necessary to have the horse scoped during fast exercise on a treadmill. This can only be performed at a small number of specialized centres but may be very useful in racing or eventing horses that are suffering from marginal loss of performance.

Most experts agree that laryngeal hemiplegia, or at least the conformational predisposition to it, is a heritable condition.