Why do dogs bury bones? 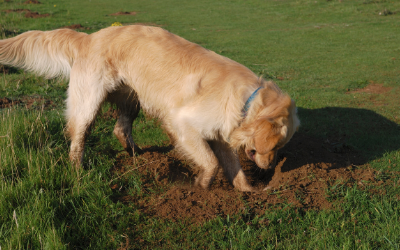 A fresh mound of dirt in the back yard is evidence that your dog has been doing a little excavating. At the bottom of the doggie engineered crypt, there often lies a treasure such as a prized bone. Why do dogs fulfill the stereotypical, cartoon-documented dog behavior of burying bones?

Like so many canine behaviors, the tendency to bury bones is firmly rooted in your dog’s ancestry. Dogs are protective creatures that safeguard all that they deem valuable. Following in his ancestors’ footsteps, your dog uses his own front feet to hollow out an area in the ground that keeps his “treasures” safe.

Food Protection. In the wild, food was often hard to come by, so it was definitely considered a “treasure.” Wild dogs were diligent hunters that spent a lot of time and energy finding a food source, catching it, killing it, and rendering it ready to consume. These devoted hunters realized they had to make the most of the bounty they captured, so they ate a little fresh meat, then safely stored the remainder for future consumption by burying it. In this manner, they took advantage of the extra of food by saving it for leaner times when it was not so readily available.

When food was scarce, there was competition between the members of the pack, so the successful hunter and his immediate family ate the kill quickly before other hunters in the area caught scent of the bounty. Then the hunter buried his prey in a chosen spot to hide it and keep it safe from other hungry dogs in the area and returned later for a second helping.

Burying food was simply necessary for survival. If the other members of the pack smelled fresh meat, they assumed they were invited to dinner. Too many guests at the table meant fewer leftovers for future consumption by the hunter’s family.

Unfortunately, members of the pack were not the only competition for the spoils of hunting. Other wild animals wanted a share of the carcass. Big cats, hyenas, jackals, and other predatory animals would demand a “free” meal if they found out about a recent kill. Eating quickly and burying even more quickly were imperative for survival.

Food Preservation. Dogs relished these times when food was in abundance and after providing for the immediate family members, they carefully stored their leftovers. Remembering times of food shortages, the crafty hunter would painstakingly save the extra meat for leaner times in a manner that reduced spoilage. Without a refrigerator in the wild, the best way to preserve meat was to bury it.

Burying bones and carcasses maintained the freshness of the meat longer by keeping it away from direct sunlight. The temperature of the earth decreased with the depth of the hole, so smart hunters dug deep cavities in which to deposit their game. If fresh food again became scarce, they would return to their “refrigerators” and take out a little stored meat for dinner.

A culinary plus, the organic content of the earth virtually marinated the meat, giving it a satisfying taste for future meals. Burying the carcass also kept non-burrowing insects away. And, when buried deeply enough, the smell of the meat could not be detected by the sensitive noses of other wild animals who sought to plunder the spoils. So, burying the meat was like placing the riches inside a safety deposit box.

But my dog doesn't need to bury his food! Why does he bury food or bones?

Food is Still a Treasure. With commercial food provided by their owners, dogs do not need to hunt in order to eat. Devoted pet owners provide for their dogs’ nutritional needs and the pups do not need to lift a paw. But even though the domestic dog knows that the food in his bowl will be replenished, and he does not need to worry about where his next meal will come from, the inherited instinct to bury food prevails.

It is not unusual for dogs to grab a bit of kibble and hide it in a corner or under a sofa cushion. While this may be an annoyance for the pet owner, this behavior is normal for dogs. They may not have real bones and they may not actually dig holes, but they do “bury” their food.

Burying Other Treasures. Dogs may bury anything they consider valuable, not just edible things. That is why pet owners often find dog toys buried underneath clothes in a laundry basket, and why they may sit on a chair and feel a chew toy beneath the seat cushion. And, when their favorite show is about to air, that is why they may find the TV remote nestled under the dog’s bed.

"Dogs may bury anything they consider
valuable, not just edible things."

This type of “burying” also follows the natural instinct to keep valued items safe and protected. Although some dogs are more compulsive with this behavior, lots of dogs bury things and are essentially hoarders. They simply want to save these special things in a safe place so they can enjoy them later.

Burying treasures – both food and non-food items – is a natural tendency for dogs and usually it not harmful, but constant digging can create problems. Some compulsive dogs dig until their paws become raw and sore. Paws can also be injured if exposed to chemicals in the soil. These dogs need medical and behavioral intervention.

Also, remember that even though dogs like to bury bones, pet owners should not give them bones in the first place! Even though their wild ancestors ate carcasses (bones and all) domestic dogs may suffer intestinal or dental problems if they eat bones. So, place an appropriate amount of kibble in your dog’s bowl twice daily and chalk up your dog’s tendency to bury treasures to his ancestral heritage.