Why Dogs Chase Their Tails

Dogs constantly amuse us with their playful antics. One of the more classic canine routines features a dog running in tight circles in endless pursuit of his own tail. We laugh as he twirls around, but the reason he chases his tail may be no laughing matter. 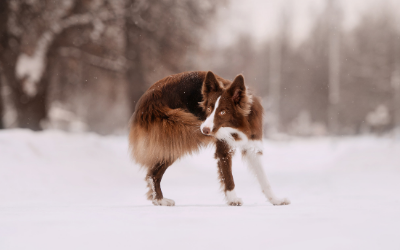 Dogs that are left alone for extended periods may get bored. Some dogs get weary of lying on the sofa staring at four walls. Even outside, dogs get bored of the limited stimulation they receive within the confines of their own backyards. So what do dogs do to amuse themselves or release all that pent-up energy? They chase their tails, providing physical exertion with a side of entertainment.

For dogs who are not getting enough daily physical activity, there is a simple solution to tail chasing. If owners engage their dogs in more aerobic exercise by tossing a ball or taking a walk, the tail chasing may cease. After all, most dogs would rather chase a ball than their own tails. For dogs that are simply bored, owners can supply stimulating food puzzles that require time and brain power to solve.

Could it be age-related?

Dogs at both ends of the life cycle commonly chew their tails. Young pups chew their tails as they become aware of their body parts. Imagine puppies thinking, “What is that thing following me around? I’ll grab it and see.” Pups consider the tail as a toy rather than anatomy. Youthful tail chasing is usually a passing phase that does not require intervention.

"Dogs at both ends of the life cycle commonly chew their tails."

On the opposite end of the spectrum, older dogs chew their tails due to decreased awareness. When mental acuity diminishes, dogs may engage in more repetitive behaviors such as tail chewing. In this case, chewing indicates a cognitive disorder that may require behavior modification medications.

Is it attention-seeking behavior?

Most people are amused when a dog chases his tail, so the dog continues the chase to please his owner. If your dog receives positive reinforcement when the chase ensues, he quickly learns to start the race whenever he wants attention. Tail chasing is an invitation for you to take notice and play with him.

Unfortunately, dogs that crave attention respond to both positive and negative attention. Your attention-seeking dog may be satisfied even if you reprimand him. Obviously, he prefers that you chuckle at his antics, but even scolding qualifies as attention, so a reprimand serves as positive reinforcement of the behavior. The key to remedying this type of tail chasing is counter-intuitive. Owners should ignore the dog while he is actually running in circles and praise him when he is not.

Is it medical? Could there be something wrong?

If your dog suddenly starts chasing or biting at his tail, you should schedule a veterinary visit. Dogs will chew at a painful area much like people rub an arthritic knee to provide relief. For example, dogs that get their tails caught in a closing door or nick them on a sharp object will chase and chew at their tails to soothe the injury.

"Tail-chasing can also occur when the dog itches around the
rear-end due to fleas or food allergies."

Could it be a compulsive behavior?

Some dogs, like some people, suffer from obsessive-compulsive disorder (OCD), but the disorder may manifest as tail chasing instead of hand washing. A dog suffering from separation anxiety may chase his tail like a nervous person bites his nails. Other dogs may chase their tail when over-excited by the presence of a visitor, or an animal or bird in the yard. Or a dog may bite his tail after an injury, find that it is soothing, and continue to chew his tail after the injury is healed.

Regardless of the initiating factor, dogs with OCD chase and chew their tails incessantly and it becomes a compulsive habit. In fact, some injuries do not heal because the dog continues to traumatize the tail. Breaking the cycle of self-trauma requires a little effort on the part of the dog and the dog owner. Behavior modification techniques outlined by your veterinarian or animal behaviorist, sometimes in conjunction with medication, may be needed to thwart the tail biting.

It helps if you can observe your dog carefully and identify the triggers that initiate the tail chasing. Then you can predict the behavior and avert it by distracting your dog with an alternate activity. For example, if your dog sees a bird, gets excited and chases his tail, divert his attention with a game of fetch as soon as you spot a bird. If he gets anxious when you leave him alone, intervene by implementing departure techniques. It is important that the diversions be performed before your dog starts chasing his tail so the diversions are not regarded as a reward by the dog. Often tail chasing is reduced by the addition of behavior modification drugs that alter serotonin or dopamine levels to the training program. Constant chewing of an injured spot may require treatment of the actual wound simultaneously.

If your dog chases his tail more frequently or injures his tail by biting it, consult your veterinarian. Your veterinarian can identify underlying medical or behavioral problems and address them individually. Getting to the root of the problem is the fastest route to success and will stop the tail chasing before it becomes a conditioned response or habit.

Next time you see your dog in pursuit of his own tail, it’s alright to laugh…just do not ignore any potential problems.