There is no delicate way to ask. This particular issue is as sensitive as a dog’s sense of smell. To address why dogs sniff rear ends, 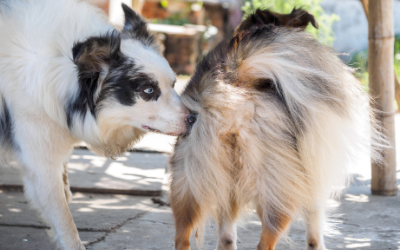 it is important to understand their sense of smell and their communication techniques.

Do dogs really have a good sense of smell?

Like humans, dogs have five basic neurological senses: taste, touch, hearing, sight, and smell. Of these senses, smell takes the lead in the canine world. A dog’s ability to smell is far more advanced than ours. An average dog has a sense of smell that is about 100,000 times more sensitive than his owner’s partly because dog noses contain 150 million olfactory receptors while human noses only have 5 million. And dogs devote about 30% of their brain mass to the detection and identification of odors, while humans use a mere 5% for olfactory purposes.

Plus, dogs have an additional tool to enhance their sense of smell. A special organ called Jacobson’s organ (also known as the vomeronasal organ) is located inside the nasal cavity and opens into the roof of the mouth behind the upper incisors. This amazing organ serves as a secondary olfactory system designed specifically for chemical communication. The nerves from Jacobson’s organ lead directly to the brain and are different from the nerves in the olfactory tissue of the nose in that they do not respond to ordinary smells. In fact, these nerve cells respond to a range of substances that often have no odor at all. In other words, they work to detect “undetectable” odors.

Jacobson’s organ communicates with the part of the brain that deals with mating. By identifying pheromones, it provides male and female dogs with the information they need to determine if a member of the opposite sex is available for breeding. In addition, this organ enhances the sense of smell that newborn puppies need to find their mother’s milk source. Jacobson’s organ allows puppies to identify their mother from other nursing dams. If a puppy is placed between two nursing mothers he will move to the one that gave birth to him.

"Jacobson’s organ communicates with the part of the brain that deals with mating."

The two separate parts of the dog’s odor detection system, the nose and Jacobson’s organ, work together to provide delicate sensibilities that neither system could achieve alone. When the dog curls his lips and flares his nostrils (similar to horses), he opens up Jacobson’s organ, increases the exposure of his nasal cavity to aromatic molecules, and essentially becomes a remarkably efficient smelling machine. Other ways this might happen may be through panting and lapping at the same time.

Do dogs use smell to communicate?

When two people meet, they evaluate body language, facial expressions and tone of voice to quickly assess each other. With this information, they may shake hands or hug, share a casual verbal greeting, overflow with tears of joy, or they may totally ignore each other. Dogs may not verbalize, shake hands, or hug like humans, but they do assess each other and gather lots of information from body language. When two dogs meet they usually walk in circles while scrutinizing demeanor and posture. Are the ears back? Is the tail wagging? Are the hackles raised?

Dogs have an advantage over people in that they use their keen sense of smell, along with a visual assessment, to provide vital information about a new canine acquaintance. Their acute olfactory senses enhance communication by using biochemical compounds emitted by dogs as the basis for chemical communication. The chemical aromas identify gender and mood, and even communicate what a dog likes to eat. By simply smelling, a dog can determine if a new friend is male or female, happy or aggressive, or healthy or ill. Dogs get a general idea about each other with a quick sniff, but get more detailed information by getting up close and personal.

So how smelling each other's rear ends part of their communication?

"Because the odor is unique to every dog,
two dogs can quickly determine if they have met before."

The manner in which dogs sniff rear ends can establish which of the two dogs is dominant and set the foundation of a canine relationship. The dominant dog will initiate the sniffing while the submissive dog waits his turn. A submissive dog may stop sniffing first and retreat. A dominant dog may growl to end the smelling session. Some dogs like to limit the information they give out and will simply sit down and clamp their tails over their rectums reducing the odor they emit.

Dogs also have a good scent memory that can identify other dogs they have not seen for years and who was the dominant member of the pair simply by smell. When dogs belonging to the same family are separated for a while, they use the sense of smell to catch up on things. Changes in odors may convey where the dog went, what he ate, and what he did.

In addition to chemical communication, there is another purpose to sniffing rear ends. Dogs smell rear ends as a calming mechanism. Performing this innate ritual soothes them and serves as a stress reliever.