Why Dogs Tilt Their Heads

You know the pose. You love the pose. The most photogenic, heartwarming, smile-generating canine pose…the head tilt. Dog owners are entertained by the upward turned face, curious eyes, and perky ears that accompany the cute head tilt when their dog hears an interesting sound.

Why do dogs cock their heads when they hear a strange sound? 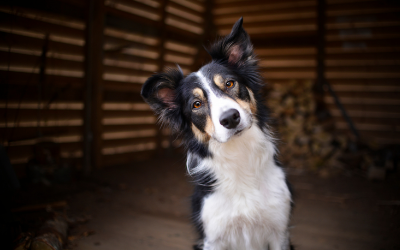 Dogs have a keener sense of hearing than people do and can detect frequencies and sounds that escape us. But humans have an advantage over dogs in one regard: a person with normal hearing ability can detect a sound regardless of the direction from which it is initiated, while a dog’s directional hearing is more limited.

The external human ear is engineered to pick up sound so efficiently that a person does not have to turn toward the sound to capture it. A person’s ability to discern sound is not affected by whether it comes from the front, back, left, or right so when someone calls you from behind, you do not have to pivot to hear him.

"A Cocker Spaniel has heavy ear flaps that entirely cover the ear canals
and interfere with sound wave transmission from all directions."

Not so with dogs. Dogs have ear flaps that partially or completely cover the ear canal and serve as a barrier to sound transmission, so dogs must change their position to optimize sound detection. Luckily, the canine ear flap (pinna) is movable so the dog can make the necessary adjustment needed to focus on the exact location of the sound. Different breeds face different challenges. A German Shepherd’s ear flap covers only the back side of the canal and limits the detection of sounds from the rear. A Cocker Spaniel has heavy ear flaps that entirely cover the ear canals and interfere with sound wave transmission from all directions.

How does head-tilting help with hearing?

To compensate for the interference of ear flaps, dogs perk up their pinnae and tilt their heads for optimum sound collection. If an interesting sound comes from the front, a dog cocks its head in the direction of the sound. If the sound comes from the rear, the dog may turn before tilting his head. If a sound comes from the side, he may not tilt at all because canine ears are located on the sides of the head and are already in a good position to pick up the sound waves.

Movable ear flaps also help a dog judge a sound’s distance by determining the time difference between when the sound reaches the right versus left ear. Essentially, cocking the head and adjusting ear flaps helps the dog assess the location and distance of sound.

Why does my dog tilt his head when I am directly in front of him?

Sometimes dogs look at their owners attentively while tilting their heads and appear to absorb every word. Sound is captured by the external ear canal, funneled to the middle and inner ear, and then transmitted to the brain. The muscles of a dog's middle ear are controlled by the same part of the brain that controls facial expressions and head movements. So, when a dog cocks his head to the side, he is trying to hear your words, understand what you are saying, and let you know that he is concentrating on you.

"Sometimes dogs look at their owners attentively while tilting their
heads and appear to absorb every word."

A dog tilts his head to show that he is engaged much the way a human would nod during a conversation to indicate that he is listening. Social dogs that enjoy human interaction usually tilt their heads more often to encourage the continuation of the conversation and prolong the human contact.

Does the head tilt help with communication in any other ways?

Dogs also understand us by assessing not only what we say, but how we say it. They assess our facial expressions, eye movements, tone of voice, body language, and inflection to translate human communications. To understand us, dogs must clearly see our faces and tilting their heads may help in this process.

Head and face shape may interfere with what a dog can see. To grasp how a long snout interferes with vision, hold a fist to your nose and look around. You have to turn your head to see an object directly in front of you. Dogs do the same thing. They tilt their heads to work around their interfering muzzles and improve their visual perspective. That cute head tilt actually broadens the range of vision and allows a dog to more clearly see a person’s face. Seeing our facial expressions improves communication.

It stands to reason that dogs with flatter faces like Bulldogs and Boston Terriers may tilt their heads less since their short noses do not get in the way as much as long muzzles. That cute head tilt may therefore be a result of physical conformation (structural arrangement of the facial and ear bones).

Do we encourage this behavior?

There are several factors involved in the canine head tilt and it is human nature to respond to the “cuteness” of the head tilt with positive reinforcement. When dogs cock their heads, we give them a good pat, speak in a kind tone, and smile. So, another reason that dogs cock their heads is because we teach them to do it by providing positive reinforcement. Our response to the head tilt encourages repetition, so the more we gush over the cute canine head tilt, the more we get to enjoy it!

When does the head tilt mean a medical problem?

A consistent head tilt that is not associated with communication may indicate a medical problem. Infections of the external ear canal caused by bacteria or yeast may cause pain, itching, and the occasional head tilt. Middle ear infections are more serious and are often accompanied by a more persistent head tilt. Holding the head to the side may also indicate a neurological problem such as vestibular disease (see handout “Vestibular Disease in Dogs”). If a dog cocks his head when there is no auditory stimulation, take him to your veterinarian.