My 3 year-old Great Dane cried out when she shook her head, and then held her head and neck very still after that. I took her to the veterinarian and was told that she has “wobbler syndrome”. What is this condition? 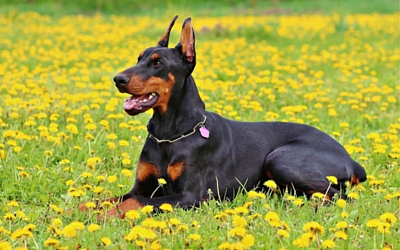 Wobbler syndrome is also known as “cervical spondylomyelopathy”, which is actually a more accurate term.

Wobbler syndrome is a disease of the neck (the cervical spine) that is seen in large and giant breeds of dog. These dogs experience compression of the spinal cord and the spinal nerve roots, resulting in nervous system deficits and/or neck pain. Approximately 50% of the cases of wobbler syndrome seen in dogs occur in Doberman pinschers, and other breeds commonly affected include the Weimaraner, Great Dane, Rottweiler, and the Dalmation. Despite certain breed predilections, any dog breed may be affected, including small dogs.

"Despite certain breed predilections, any dog breed may be affected,
including small dogs."

What are the clinical signs of wobbler syndrome?

Many dogs with wobbler syndrome develop a progressive, uncoordinated gait in the rear limbs. The incoordination may progress to include the front limbs as well. These dogs can lose muscle mass in the rear legs as well as over the shoulder blades. Their toenails may become worn because they tend to drag their feet.

Some dogs with wobbler syndrome will instead develop very acute signs, including neck pain (which can be quite severe), and acute weakness. The weakness can be so severe it can hinder walking altogether.

How is wobbler syndrome treated?

If a dog with wobbler syndrome can be treated medically, rather than surgically, their treatment is generally conducted on an outpatient basis. Conservative, non-surgical treatment consists of managing pain and restricting activity for several months. Non-steroidal anti-inflammatory drugs (NSAIDs) are generally prescribed to decrease inflammation of the affected tissues and reduce pressure on the spinal cord and spinal nerve roots.

"Physiotherapy may contribute to maintaining muscle mass and speeding recovery."

Non-ambulatory dogs are kept on soft bedding and turned regularly to prevent “bed sores”. Their bladders and bowels must be emptied manually on a regular schedule. Physiotherapy may contribute to maintaining muscle mass and speeding recovery.

Surgical treatment of wobbler syndrome involves fusing the segments of the cervical spine that are unstable. Surgical patients will remain in the veterinary hospital during their initial recovery. Activity restriction following surgery must be complete and consistent for at least 2 – 3 months following the procedure in order to facilitate fusion of the involved cervical segments.

What is the long-term outlook for dogs with wobbler syndrome?

For dogs with wobbler syndrome who are treated surgically, there is a 1 – 5% chance for significant complications related to surgery, and approximately 20% will have a recurrence. Those dogs treated medically will need management for the rest of their lives, and their treatments will change as their symptoms progress. Approximately 25% of dogs treated without surgery will remain stable.