Teaching Your Dog to Drop an Object

Some dogs may not readily give up objects, especially those that are novel or particularly motivating. This makes 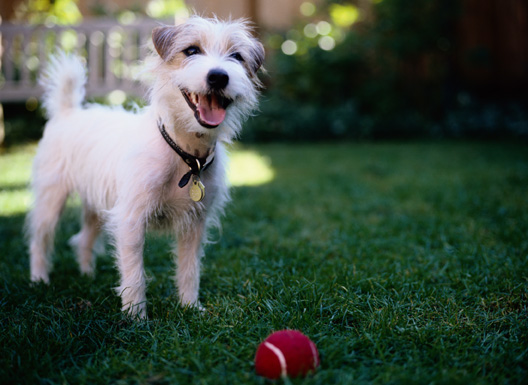 it difficult to play games such as fetch and may be counterproductive in games of tug-of-war where the dog consistently "wins" the game, and will not give up control of the object. In fact, some dogs are possessive to the point of aggression with some objects. Therefore in order to play with your dogs constructively and positively and as a means of retrieving objects that your pet should not have in its possession, the give or drop command can be extremely useful.

It is very useful if you can teach your puppy how to give up items with a command, but this is not always easy to train. For some dogs, it might first be helpful to teach the dog to take something that you have offered in its mouth. Remember that the goal of "give" or "drop" training is to achieve the desirable behavior so that if you initially give the dog something too desirable, you may have a difficult time motivating your dog to give it up. A rubber toy or wooden stick may work well. Keep your hand on the object at first and once the puppy has grasped the toy, say 'give', take it away and offer a special food treat. The purpose of this exercise is to get the puppy to open its mouth and release the item. At the same time you need to say, 'give it' so that the action becomes associated with the phrase. By repeated pairing of the words "give it" with the release of objects, the dog will learn the meaning of the words.

"Continue to practice until the puppy expects to give up the toy..."

Continue to practice until the puppy expects to give up the toy for the food treat and then gradually allow the puppy to have the object a little longer before using the 'give' command and offering the treat. Over time you can progress to more difficult items and allow the puppy to hold onto them a little longer before giving the command and offering the treat. At the end of the session you can even give the puppy a special toy such as a food filled Kong® rather than a treat as a substitute for the one you are taking away. The process is the same with older dogs (see (75) Aggression – Possessive – Objects and Toys).

Some dogs that enjoy fetch, retrieving and tug games may voluntarily give up the toy through the course of play and retrieving. These should be encouraged by having the dog sit, giving a favored treat and then returning to the game. Once the dog is regularly dropping the toy so that it can get its treat and continue the game, you can begin to add the give or drop word each time the dog is about to give up the toy.

"If the dog will not drop the toy readily,
using two toys or balls may be useful."

If the dog will not drop the toy readily, using two toys or balls may be useful. When the dog returns with the first toy, hold up and show the dog the second toy while saying "drop" or "give" (always use the same word). Most dogs will drop the toy they have to get the new one in your hand. When they do drop the toy, ask for a "sit" and then throw the toy in your hand. As they run to get the new toy, pick up the other one and repeat the sequence again. Many dogs will then learn to drop the toy as soon as they return.

What if my dog does not readily give up the toy?

If you are having difficulties getting the toy away begin the training with toys of lesser value such as a rubber or nylon play toy. Allow your dog to grasp onto the toy and then give the command and begin to take it away almost immediately. You can also prompt your dog to give up the toy by using a sit command and offering a favored treat. Then while your dog is sitting pick up the toy and give the treat. On subsequent sessions use a hand cue or the word to drop but do not show the treat. Another option is to wait as long as it takes until your dog tires of the toy and then when it is dropped call your dog over and give a favored treat. Clicker training can also be very helpful for immediately reinforcing the drop (see (18) Clicker and Target Training). In future sessions try to anticipate when your dog is about to drop the toy, say the word drop or give and then give a favored treat after your dog gives up the toy. In fact, if your dog is beginning to learn that dropping earns treats, you can give back the toy and repeat the process as long as the drops are occurring more quickly and regularly. Another option is to use head halter and leash for controlling the head and mouth during training. 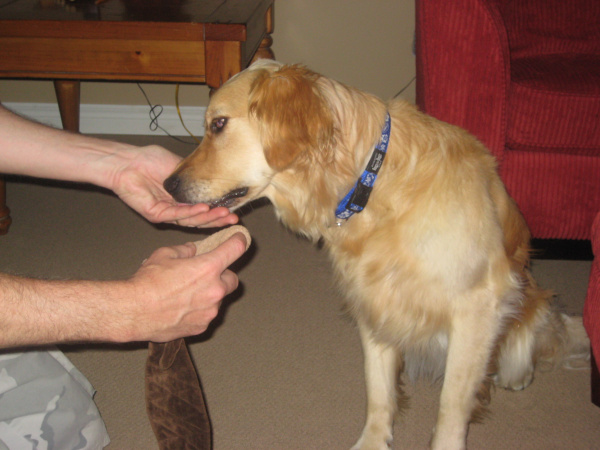 If at first you don't succeed then you are likely starting with an object of too high a value for the dog or you may have to use a favorite tasty food treat to lure the dog away from the object. However, as soon as the dog learns that a treat will be given for giving up the object, progress immediately to a closed hand lure (also called a target fist) where you no longer show the dog the treat. The goal is for the command or at least the hand signal to initiate the give or drop and reward sequence.

There is also a particular toy that can be useful for drop training. The tug-a-jug toy (see (11) Behavior Management Products) is a toy that has a rope attached to a bottle in which food treats can be placed. Each time the dog pulls on the rope, some treats will be pulled out of the toy. As the dog lets' go of the toy to pick up the treats, say drop. After the treats are eaten, have the dog sit and repeat the game.

Whenever you train a new command, repetition and patience are extremely important. It is not enough to try and teach 'give it' for 1-2 minutes one day and expect your dog to know it the next day. It is only through repetition and practice that the behavior will become solidified.