After getting diagnosed with meningioma, Malcolm the cat thrives after having life-saving surgery. 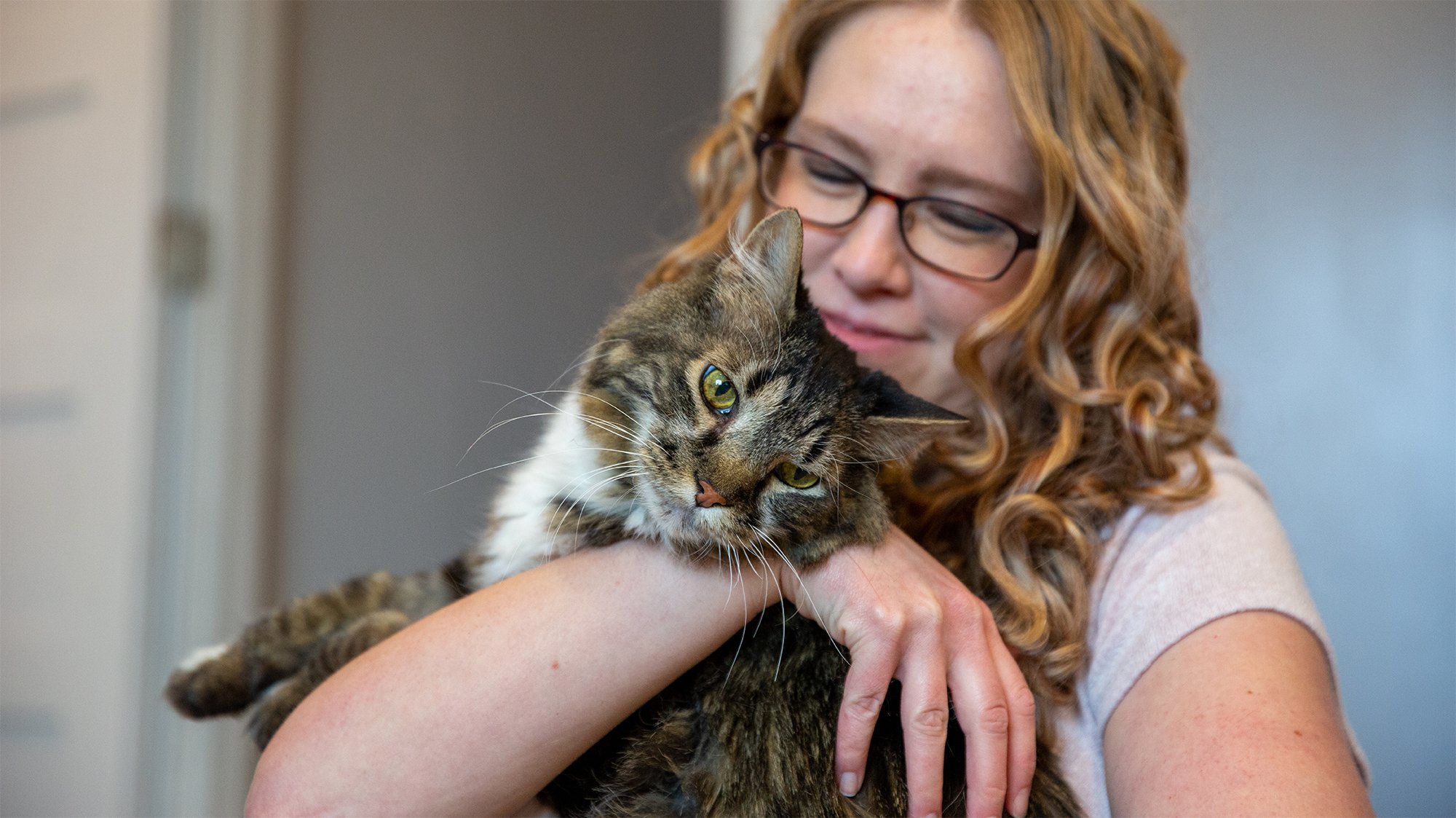 When he was much younger, a cat named Malcolm could've had the moniker "Spider-Cat." According to his owners, sisters Elizabeth and Rebecca Tillman, their active Maine Coon mix would literally climb the walls, leaving a trail of paw prints about 4 feet high.

But just a week or so after Malcolm's 11th birthday, Elizabeth and Rebecca started noticing some concerning changes in the once agile cat. Malcolm would fall when he tried to jump up on the furniture. And as he was eating, his right front leg would slip out from under him.

There were behavioral changes as well. "He had gotten more standoffish," Rebecca says. "He's the caretaker of everyone, so being antisocial was a little different."

The sisters brought Malcolm to their veterinarian, who referred them to Dr. Kelly Crawford, a veterinary neurologist at VCA Alameda East Veterinary Hospital in Denver, Colorado. An MRI revealed that Malcolm had a tumor on the left side of his brain.

'A little bit bigger than a golf ball'

The tumor was "a little bit bigger than a golf ball," Dr. Crawford says. "It was coming from the lining of his brain called the meninges, so it was kind of pressing in from the outside."

It was a meningioma, the most common type of brain tumor in cats. Fortunately, a meningioma is usually benign and doesn't spread anywhere else in the body. "But we call them malignant by location, because if they keep growing in the skull, which is like a fixed bony box, it can only kind of take so much of that tumor continuing to grow," Dr. Crawford explains.

It's not known for sure what causes a meningioma. "We tend to see it develop in cats over the age of 10," Dr. Crawford says. "The average age is 11 or 12. Malcolm was 11 when we diagnosed it, so he was right at the average age."

According to Dr. Crawford, cats recover pretty well from this surgery. The recovery process takes about two months as they gradually get better.

Based on this positive prognosis, Elizabeth and Rebecca agreed to have Malcolm's tumor removed. The VCA Alameda East team was "very realistic and upfront," Elizabeth says. "We actually appreciate no sugarcoating, especially in these situations."

Dr. Crawford performed the surgery in November 2021, with her fellow veterinary neurologist Dr. Kelli Kopf by her side "for moral support," Dr. Crawford says. 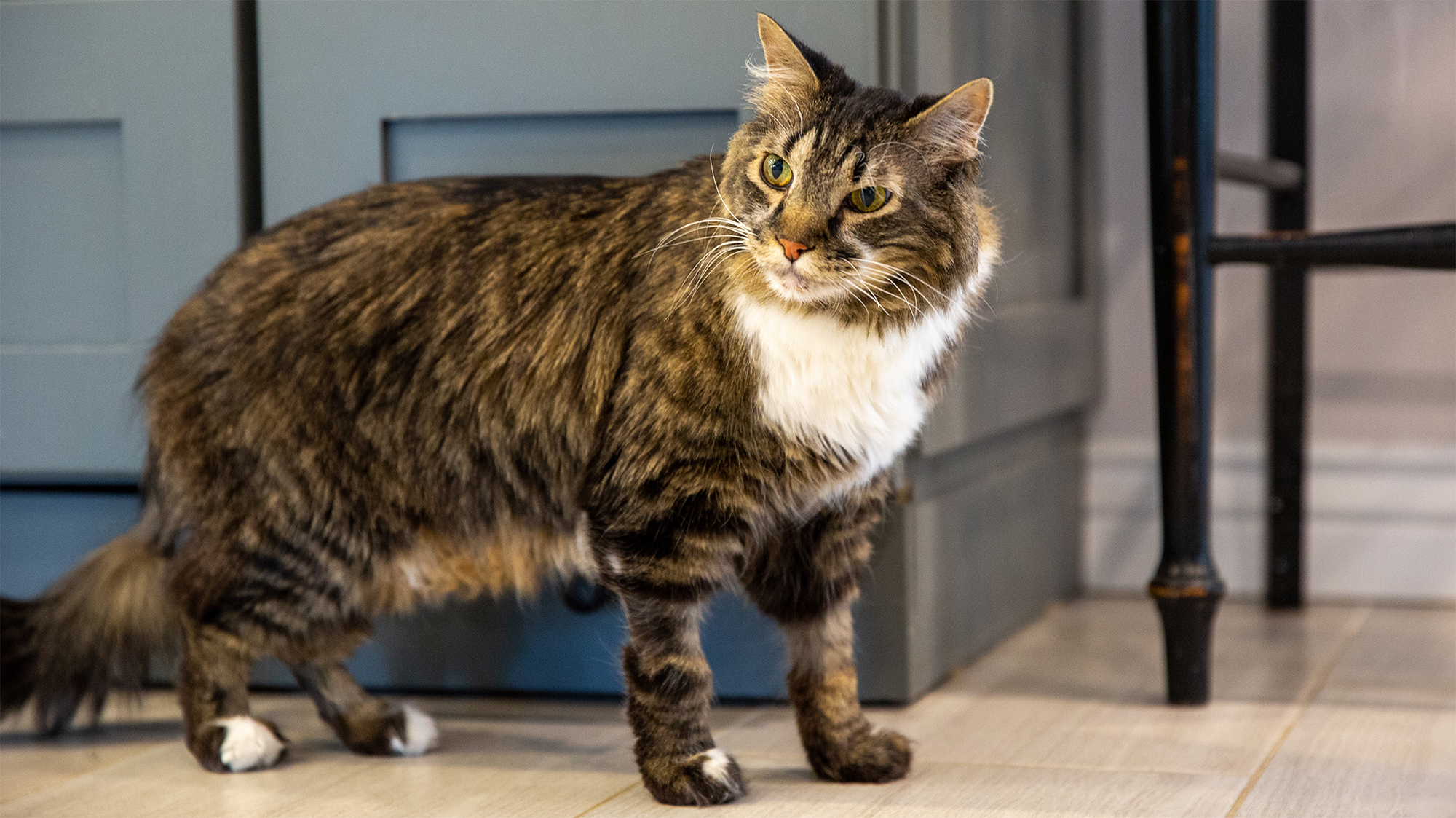 “Some of the symptoms of a neurological problem that owners should watch for are changes in their pet's normal behavior, weakness, balance loss, and seizures.”

Monitoring Malcolm
During the five days Malcolm remained in the hospital after his surgery, the VCA Alameda East staff allowed Elizabeth and Rebecca to visit their cat in the ICU. "They let us come in and sit with him, and they always told us 15 minutes, but usually we were leaving on our own 30 minutes later," Elizabeth says. "They were very accommodating to let us have time with him and just do what we needed."

After they brought Malcolm home, Elizabeth and Rebecca put their cat in a pen with a camera so they could easily keep an eye on him.

"He had to be confined, and as opposed to a crate—which in my experience, cats fight against and can hurt themselves—we used a modular plastic playpen," Elizabeth says. "It worked really well."

The camera was set up so the sisters could fully view Malcolm and monitor him without disturbing his sleep. It also sent motion alerts. "We took turns at nighttime," Elizabeth says. "If he needed help during the night, I would get up and the next night would be Rebecca's turn. It was like having a newborn."

Neurological symptoms to watch for

Although there's a possibility the tumor could grow back, that can take several years to happen. In the meantime, Malcolm is enjoying life with his owners and his six cat buddies.

"Malcolm's owners are very astute," Dr. Crawford says. "The first time they noticed something was off, they went to their primary vet, who recommended they come here. So if there's ever anything even slightly off with your pet, it's worth asking your veterinarian about, because it might be a sign of a bigger problem."

Dr. Crawford says some of the symptoms of a neurological problem that owners should watch for are changes in their pet's normal behavior, such as acting lost in the house. "Sometimes we can see them get stuck behind furniture or stuck in a corner and not seem to know where they are."

Other symptoms include weakness, balance loss and seizures. However, Dr. Crawford notes that Malcolm's symptoms were a lot more subtle.

Malcolm's full name is Malcolm Reynolds. He was named after the captain of the spaceship Serenity on the TV series Firefly. "Malcolm is like the captain of the ship and he cares about everybody, but he can be a little bad sometimes," Rebecca says. "I always like to describe him as a thief with a heart of gold: he's mischievous with good intentions."

As they drove to VCA Alameda East to visit Malcolm after his surgery, Elizabeth and Rebecca pulled up beside a truck with a Serenity spaceship decal on it, along with the words "Still flying."

"That show ended almost 20 years ago, but some guy has the decal on his truck and we just happened to be stopped right next to him," Elizabeth says. "That had to be a sign that Malcolm's going to be just fine. I'm pretty sure we cried when we saw that."

If your pet is showing any symptoms of a neurological problem, visit the website of your local VCA Animal Hospital to find a specialist who can help. 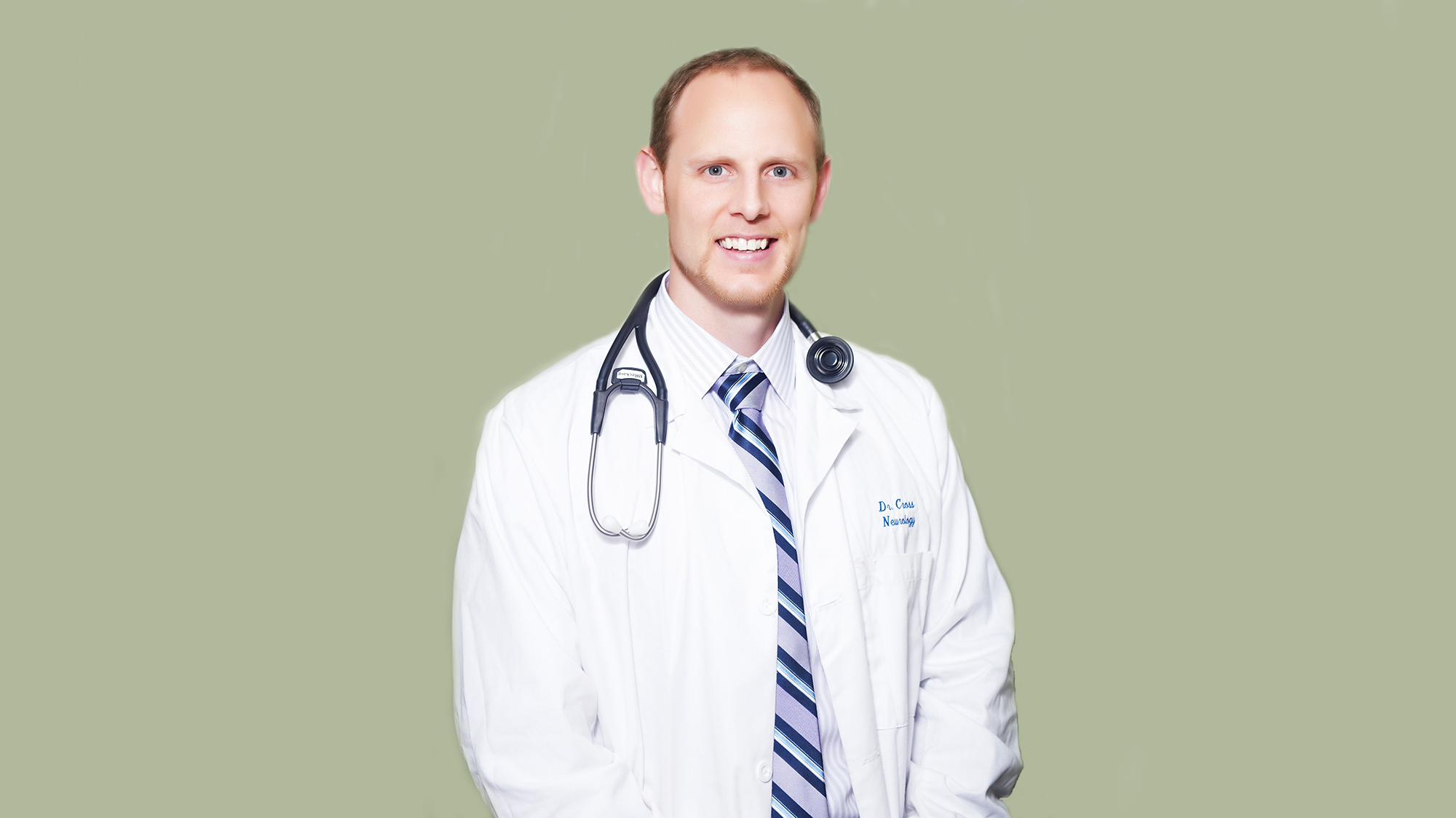 Life at VCA
Treating CDS in Cats and Dogs 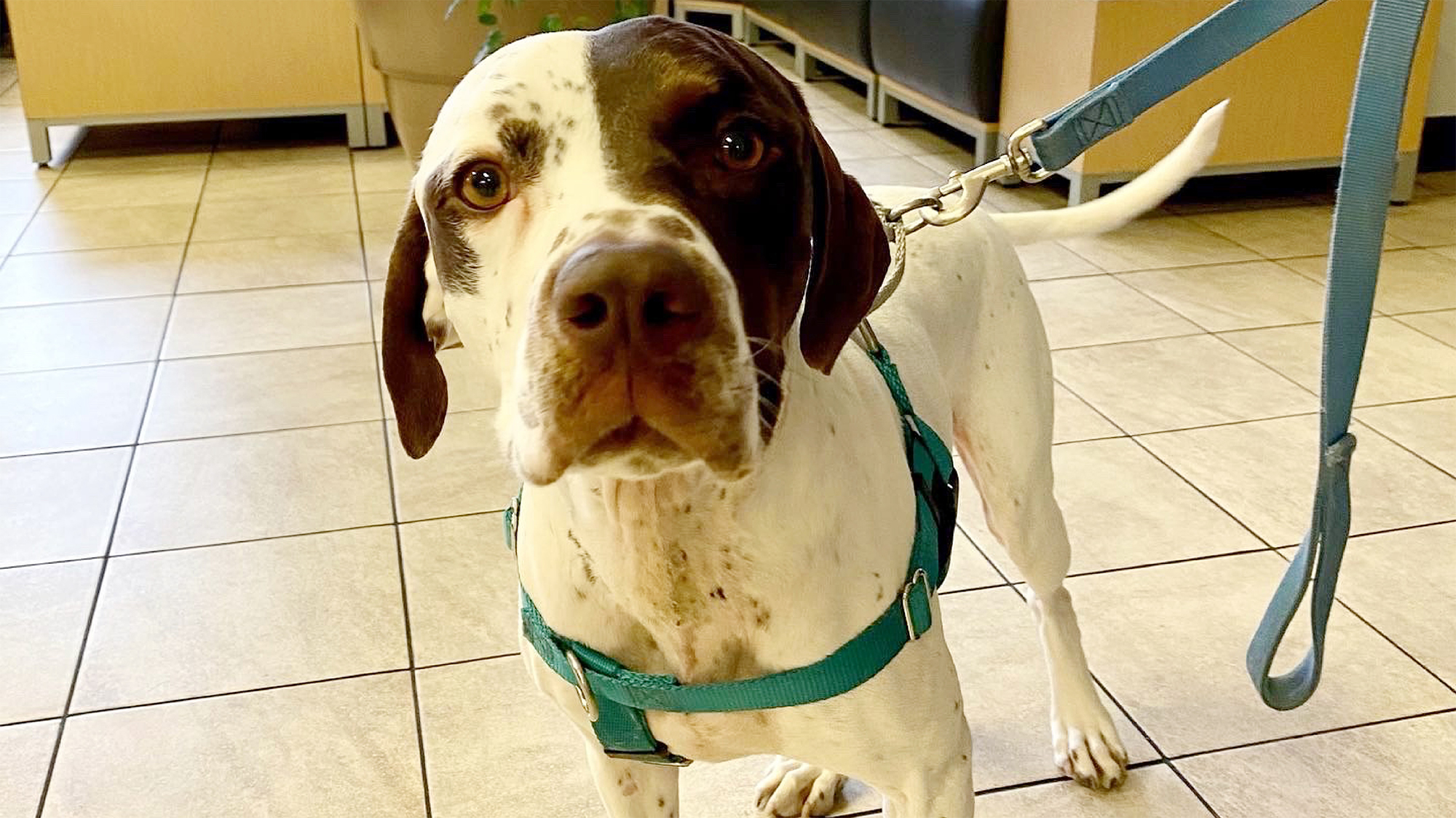