As cats age, we generally see changes in their behavior. The wild and crazy playful activities we associate with kittens gives way to adult cats sleeping in the sun and prowling around the house. We commonly presume senior cats will take even longer naps in the sun or on our beds. It is important, however, to differentiate normal feline behaviors from abnormal ones, as some behavior changes in aging cats arise from pain and are definitely not normal. Cats are very good at hiding signs of pain, so cat owners need to be very observant to recognize when their cat needs extra help.

What kind of behavior changes might I see in my cat that could be a sign she’s in pain? 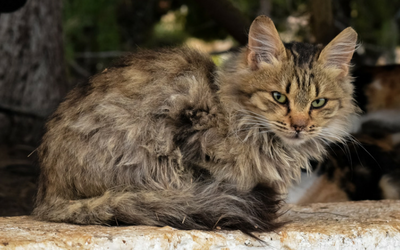 One of the most common pain-associated behavior changes we see in aging cats is a decrease in grooming and self-care. Cats are, by nature, extremely finicky about keeping themselves clean. Watch any conscious cat for longer than a few minutes, and you are likely to see it cleaning some part of its body.

Osteoarthritis (OA) is one of the most common chronically painful ailments in cats, affecting more than 90% of cats 10 years of age and older. Spinal arthritis makes it uncomfortable to twist and turn, so grooming the body, especially the hind end, becomes difficult. OA in the lower spine and hips can make the area over the pelvis and upper rear legs tender. When grooming the lower back, pelvis, and rear legs becomes painful, the cat simply stops taking care of its coat. Areas of the cat's body that are not groomed become matted, and the cat develops an overall unkempt appearance. When we try to help them out by using a comb or brush, they tend to object.

"One of the most common pain-associated behavior changes in aging cats is a decrease in grooming and self-care."

If you notice your cat developing matted hair or flaky skin, make an appointment with your veterinarian, as this can be an important signal of pain. Because cats like to be clean, a dirty cat is not normal. If your cat has trouble grooming even after its pain is well managed, consider having a groomer give it a 'lion cut' to make the body hair short and easy to keep clean.

Are there any changes in litter box behavior that could mean my cat is in pain?

As already stated, cats are famously clean and tidy, and that generally means being careful with their litter box habits as well. They like having a discrete place to eliminate, and most cat litter makes the litter box an attractive destination. If a cat that has previously been consistent in using the litter box appropriately suddenly begins missing the box or eliminating in other areas of the house, pain should be considered as a potential explanation.

When cats have lower back or hip pain, climbing into and out of a litter box can be a terrible experience. Even worse are covered litter boxes, where the top of the opening can come into contact with the cat's back. In this situation, a cat will often go to the litter box, but simply refuses to go into it. The cat may choose instead to eliminate near the litter box, letting us know that it understands this is the place to eliminate, but also letting us know that it is uncomfortable getting into the litter box. Other cats may simply choose to eliminate in the same room as the litter box, but not necessarily next to it. And still other cats may choose a completely different part of the house for elimination. Once pain is managed, provide your cat with lower-sided litter boxes.

"If a cat that has previously been consistent in using the litter box appropriately suddenly begins missing the box or eliminating in other areas of the house, pain should be considered as a potential explanation."

A variation on this theme may occur if the litter box is on a different level in the home from where your cat usually spends her time. Traveling up or down a flight of stairs to get to the litter box may be too daunting a task for a cat with back or hip pain.

One last altered litter box behavior linked to pain is the cat that begins to stand while urinating instead of assuming the usual squat position. These cats can no longer squat comfortably. By standing to urinate, they may miss the litter box, allowing urine to hit the nearest vertical surface or to collect on the nearby floor.

I'm worried I could miss pain in my cat. Is there anything else I should watch for?

Cats that once jumped up on furniture, counters, and windowsills, but now either do not jump or ask to be lifted may be in pain and need closer evaluation. One of the measures of a successful pain management protocol in senior cats is the return of jumping behavior.

Common changes that occur when a cat experiences pain include:

When cats object to being touched, petted, or otherwise handled (particularly if they once enjoyed this), it is a ’red flag’ that pain may be present.

Other signs of pain include:

What is my takeaway message?

In any of the above scenarios, pain should be on the list of considerations. Schedule an appointment with your veterinarian, and voice your concerns. Cats tend to hide their pain, so do not ignore these behavioral clues into your aging cat's condition. The sooner pain can be identified and treated, the better it is for everyone. Your kitty will thank you!