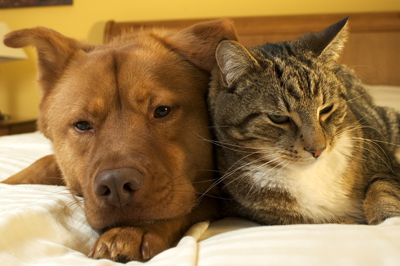 What is cognitive dysfunction, and how is it diagnosed?

It is generally believed that a dog or cat’s cognitive function tends to decline with age, much as it does in people. If your dog or cat has one or more of the signs below and all potential physical or medical causes have been ruled out, it may be due to cognitive dysfunction. Of course, it is also possible that cognitive dysfunction can arise concurrently with other medical problems, so that it might be difficult to determine the exact cause of each sign.

• Disorientation – Such as getting lost in familiar areas, not recognizing familiar people, and going to the wrong side of the door.

• Interactions – Social interactions might be altered between the pet and owner or pet and other pets; some pets may appear to be more clingy, while others   might be disinterested or even irritable when petted or approached.

• Sleep-wake cycle changes – Your pet may sleep more during the day, wake at nights, or have irregular sleep-wake cycles. The acronym DISHA has been used to describe the signs associated with cognitive dysfunction.

"The acronym DISHA has been used to describe
the signs associated with cognitive dysfunction."

• House soiling – Pets begin to soil in areas where they were previously unlikely to soil, including indoors or unusual places outdoors; dogs may stop signaling when they need to eliminate.

• Activity levels – Initially, there may be an overall decrease in activity levels or a decreased interest in play. However, with increasing age, some pets become more active in that they are restless, cannot settle, wander aimlessly, or develop repetitive behaviors such as licking.

• Anxiety – An increase in anxiety and agitation, which might be expressed as vocalization, newly emerging fears, or phobias or becoming more clingy and overly dependent on owners.

• Learning and memory – Recent research has shown that there is indeed a decline in memory and learning as dogs age, and that in controlled neuropsychological tests that determine the pet’s ability to find hidden food, a loss of memory or learning ability may begin several years before clinical signs are obvious. Although there are not yet any standardized memory and learning tests in pets, you should be aware of any change in behaviors that might indicate that your pet is unable to do the tasks that it has been previously taught. Also, realize that when things change in the household or the pet’s schedule, your aging pet cannot adapt or learn as quickly as in the past. Although these may be signs of brain aging, they may also be signs of other medical problems and should therefore be reported to your veterinarian as soon as they are noticed.

At what age might cognitive decline begin to arise?

In one study of dogs that were 11 to 16 years of age, 28% of owners of 11- to 12-year-old dogs and 68% of owners of 15- to 16-year-old dogs reported that their dog exhibited at least one of the signs above. However, it’s important to note that these are signs noticed by pet owners in comparison to when their dog was younger. Research has shown that if you were to try and train your dog on some new learning tasks, after about 7 years of age, many dogs begin to show a decline in memory and learning ability.

"Treatment options tend to be most effective
at slowing or reversing decline when they are
instituted early in the course of disease."

Do pets get Alzheimer’s?

Many of the same changes and lesions associated with Alzheimer’s disease in people have also been recognized in dogs and cats. If multiple behavior problems develop and these changes progress to the point where the dog or cat is no longer a “functional” pet, the condition may be consistent with senility or dementia of the Alzheimer’s type.

Can geriatric behavior problems be treated?

In many cases, the answer is yes. Of course, if there are medical problems contributing to the behavior changes, the problem may not be treatable. The key, therefore, is to report changes and bring in your pet for assessment as soon as new problems arise.

Dogs that develop behavior problems due to underlying medical conditions may need alterations in their schedule or environment in order to deal with these problems. If the condition is treatable and can be controlled or resolved (e.g., Cushing’s disease, infections, painful conditions) then, as discussed, you must be prepared to retrain the dog because the new habit may persist. For example, the house soiling pet may have less duration of control due to its medical problems. If these conditions cannot be controlled, then the pet’s schedule (more frequent trips outdoors) or environment (installing a dog door, paper training) may have to be modified. With conditions that affect a cat’s mobility, adjustments may be needed to the pet’s environment, litter box placement, or type of litter box (e.g., a lower-sided box).

In cognitive dysfunction, an increase in a neurotoxic protein called beta-amyloid, an increase in damage due to toxic free radicals, a loss of neurons, and alterations in neurotransmitters such as dopamine may be responsible for many of the behavior changes. Both drug therapy and dietary therapy that might improve these signs and potentially slow the decline are now available. Again, early diagnosis and intervention are likely to have the greatest effects. 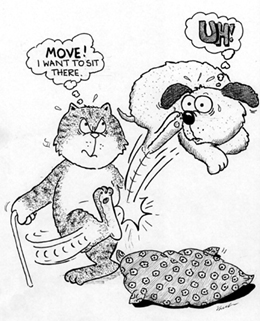 Are there treatments that can improve the signs or slow the progress of brain aging?

Selegiline (Anipryl® Pfizer Animal Health) is a drug that has been licensed for the treatment of cognitive decline in dogs in North America. It is classed as a monoamine oxidase B (MAO-B) inhibitor, but its action may be to enhance neurotransmitter function, such as noradrenaline and dopamine, to help reduce free radical damage in the brain and perhaps as a neuroprotective drug. Many of the signs listed above (DISHA) may be improved by treatment with selegiline.

Another method of managing senior behavior problems is a therapeutic prescription diet (b/d® Canine Aging & Alertness - Dry (Hill’s Pet Nutrition) that is designed to protect against and possibly reverse damage due to toxic free radicals. It is enhanced with a variety of antioxidants, including vitamin E, selenium, vitamin C, and fruits and vegetables. It is also supplemented with essential fatty acids in the form of fish oils and some factors to help the cell’s mitochondria function more efficiently, including carnitine and lipoic acid. The diet has been shown to improve learning ability and memory in senior dogs and improve many of the clinical signs listed above.

Another new diet supplemented with botanic oils containing medium-chain triglycerides has been shown to improve cognitive dysfunction through the production of ketone bodies as an alternative energy source for the brain. Although there are a wide range of natural supplements that, for the most part, are as yet unproven in efficacy, dietary supplements with either S-adenosylmethionine (SAMe – Novifit® Virbac Animal Health, North America) or a combination of resveratrol, vitamin E, B6, gingko biloba, and phosphatidylserine (Senilife® Ceva Animal Health), or a product derived from jellyfish protein (Neutricks® Quincy Animal Health) have also been shown to improve signs and perhaps slow the progress of cognitive decline.

Research is ongoing in this area. Drugs that improve circulation to the brain and decrease the chance of blood clots (infarcts) may show some promise. Propentofylline is licensed for use in some countries outside North America. Research has also shown that the cholinergic transmission may be affected in elderly pets so that drugs that have anticholinergic effects should be avoided where possible, and drugs that enhance cholinergic transmission may be another possible treatment option on the horizon. Finally, for treatment of specific signs such as anxiety disorders and altered sleep-wake cycles, other drugs and natural therapeutics may be useful, but special caution and consideration should be given as to the potential side effects in the elderly.

Is there anything I can do to help my pet live a longer and healthier life?

In addition to finding the right diet for your pet’s age and health, ensuring that your pet is not overweight can have significant benefits for health and lifespan. It has also been shown that environmental enrichment is very helpful for maintaining brain health (the concept of “use it or lose it”). Therefore, continuing to provide your pet with physical exercise, play sessions, new toys, and even new training can all help enrich the lives and brains of our older pets. This may require modification to the enrichment program to suit the physical and behavioral needs of the senior pet. For example, physical exercise might need to be limited to short walks or opportunities to sniff around the neighborhood. In addition as physical health and sensory function decline, toys, play, and training will need to be adapted to suit the capabilities and limitations of the individual. However, although alterations may be required, the focus should continue to be on enrichment with social interactions, training, and feeding toys.

Is there anything else I might do to help my pet live happily in its senior years?

As they age, and diseases and new health problems arise, adjustments may have to be made to accommodate our senior pets. For dogs that need to eliminate more frequently, more frequent trips outside, putting in a dog door, indoor potty/paper training, or doggy diapers may be useful or necessary. For cats that eliminate more frequently, more litter boxes, larger boxes, and more frequent cleaning may be necessary. Pets that have trouble with their mobility may need assistance getting up and down stairs or may need the aid of ramps to get up and down stairs. Cats may need their beds or litter boxes moved to an easier-to-access areas or larger boxes with lower sides for easier access. Improving lighting and adding aroma cues can help pets that are losing their sight to better navigate through the home.