Buspirone (Buspar®) is a human antidepressant drug. It has been shown to be effective in a significant number of cats with elimination (urination or defecation) disorders such as inappropriate urination, especially urine marking and other behavior problems.

What is the success rate?

The success rate of buspirone therapy is not 100% but, for the intended purpose, it has been shown to be more effective than many other drugs. Your veterinarian will discuss with you the prognosis for this treatment and other medical treatment options for your cat's condition.

Are there any side effects?

The most commonly reported side effect associated with buspirone is an increase in affectionate behavior in cats. Occasionally, owners will complain of being unable to sleep due to aggressive purring and rubbing by their cat. Any medication that modifies behavior has the potential to lower a cat's inhibitions; thus, other behavior changes are possible, including aggression.

Side effects reported by humans taking buspirone include nausea, headache, dizziness, appetite loss, and restlessness. An increased heart rate has been a rarely reported side effect in humans.

How is it dosed? 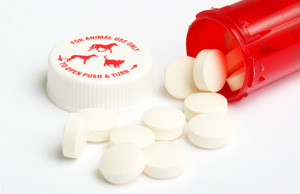 When buspirone is used in cats, it may have a long-lasting effect. In many cases, this effect was seen after an 8-week course of medication. In these cases, the medication could be discontinued and many cats did not resume the urine-marking behavior.

The usual instructions for treatment of elimination disorders are outlined below. If the directions are unclear, or if you have any other questions, please call for further instructions.

2. If a relapse occurs after successful therapy, resume buspirone at a dose of 5 to 7.5-mg every twelve (12) hours and continue for six to twelve months.