Corns are specific types of bruises of the sole, specifically occurring at the angle of the sole between the hoof wall and the bars, i.e., at the 'seat of corn', most commonly affecting the medial (inside) aspect of the front feet. They are an important cause of lameness in shod horses. 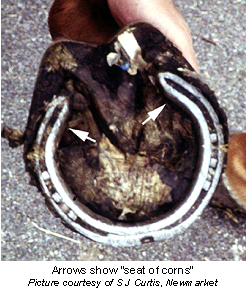 Bruises are traumatic injuries that result in hemorrhage into the sensitive tissues of the sole. Hemorrhage increases pressure in the sensitive tissues that results in pain. Hemorrhage causes discoloration in the typical manner of a bruise occurring anywhere else. Corns may develop acutely (suddenly) or chronically (over time), the latter typically in horses with low heels where the walls collapse inwards persistently traumatizing (injuring) the seat of corn.

Corns may be classified as:

Dry corns - hemorrhage between the sole and sensitive tissues (see bruised sole) causes thinning of the sole over the seat of corn. Paring with a hoof knife may reveal a red bruise, although this may be difficult to find until the affected horn grows down towards the ground level.

Moist corns - trauma causes inflammatory fluids to accumulate under the sole giving the impression that the horn of the sole is wet.

Suppurating corns - penetration has occurred and infection has developed underneath the sole at the seat of corn resulting in pus formation (see our hand-out on pus in the foot).

How are corns diagnosed? 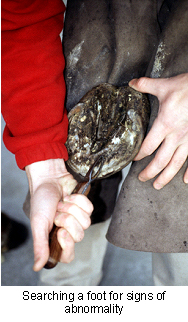 Corns cause a horse to show signs of lameness, the severity of which depends upon the degree of bruising. The lameness is characterized by a shortened anterior stride phase with toes contacting the ground, saving the heels. The degree of lameness is increased on hard ground and when the horse is circling and is decreased on soft ground. It is increased when shoes are removed. If corns affect both front feet, a bilateral foreleg lameness may not be noticed until the horse is lunged or ridden in small circles.

There is a pain response to hoof testers (the horse tries to pull his foot away when pinched) specifically over the seat of corn rather than all over the sole as with general bruising of the sole (see our handout on bruised soles).  The horse's digital pulse strength may be increased, when the heel arteries are felt with a finger, and the feet may appear warm to the touch.

A dry, moist or suppurating bruise can be seen at the seat of corn when the overlying sole is pared away.

Radiographs (x-rays) may be used to rule out other causes of lameness in the heel area such as sidebones, navicular disease or pedal osteitis.

How are corns treated?

The horse's shoes should be removed as a first step. Dry and moist corns are pared with a hoof knife to relieve pressure, suppurating corns are opened to drain and treated as for 'pus in the foot'.  Be careful not to pare the sole excessively in thin soled horses or the condition may be worsened. A poultice, followed by dry protective bandaging, may help to speed recovery and the horse should be rested until recovered.

After rest and recuperation, the horse can be re-shod long and full at the heels. For chronic corns, the horse should be shod with wide-webbed egg-bar shoes to support the heels and encourage heel growth.

How can corns be prevented?

Regular hoof trimming and shoeing, with shoes that are fitted correctly to the horse's feet, especially that are not too short at the heels, is the best way of preventing corns in horses. It is wise to avoid excessive foot trauma on hard going.

Horses with thin soles often have poorly balanced feet, especially long toes and low heels (dorsopalmar imbalance) and this should be corrected, where possible, sometimes requiring egg-bar shoes to be fitted.

Foot pads are layers of rubber or leather that are fitted between the foot and the shoe so that the entire sole is covered in an attempt to prevent bruising of the sole. They should be used with care since they are often at best ineffective and at worst detrimental. Pads may exacerbate the effect of uneven ground because they effectively bring the sole closer to the ground surface. In addition, stones etc. may become trapped beneath them against the sole. Also, the presence of pads prevents the essential daily task of thoroughly inspecting the solar surface of the foot and frog. Despite these problems, pads remain very popular with some owners and trainers.

Caution
Even with the best foot attention, some horses are prone to bruising of the sole, although corns are almost always preventable. Prevention is always better than cure and the prognosis for chronic corns is guarded.