What is Cushing's disease? 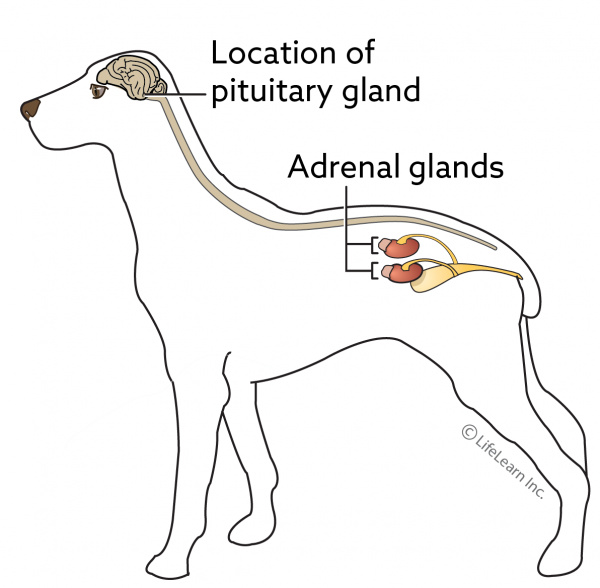 Cushing's disease (also known as Cushing’s syndrome) is a condition in which the adrenal glands overproduce certain hormones. The medical term for this disease is hyperadrenocorticism. Literally translated, “hyper” means over-active, “adreno” means adrenal gland, and “corticism” refers to the outer part (cortex) of the adrenal gland.

The adrenal glands are located near the kidneys and produce several vital substances that regulate a variety of body functions and are necessary to sustain life. The most widely known of these substances is cortisol, commonly known as cortisone. Decreased or excessive production of these substances, especially cortisol, may be life-threatening.

What causes this disease?

"Identifying the cause of Cushing’s disease is important because each type is treated differently and each has a different prognosis."

Pituitary gland tumors may be microscopic or large. Depending on the size of the tumor, clinical signs other than those of Cushing's disease may be present, since a large tumor might press on or interfere with nearby structures in the area. Generally, if the activity of the adrenal gland can be controlled, many dogs with this form of Cushing's disease can live normal lives for many years, as long as they take their medication and stay under close medical supervision. If the pituitary tumor grows, it will affect the brain, often r 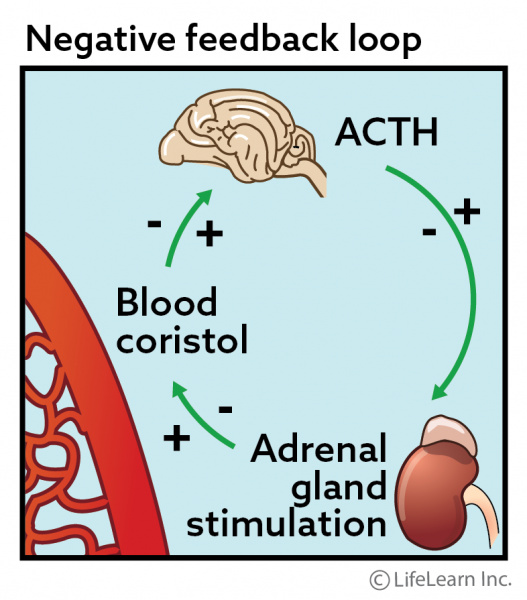 esulting in neurological signs and giving the pet a less favorable prognosis. This happens in approximately 15% of these patients.

Adrenal gland tumor. Cushing's disease may be the result of a benign or malignant tumor of the adrenal gland itself (adenoma or carcinoma, respectively). If the tumor is benign, surgical removal will cure the disease. If the tumor is malignant, surgery may help for some time, but the prognosis is much less favorable.

Excessive cortisol from prolonged use of steroids. The third type of the disease is called iatrogenic Cushing's disease. It is caused when there is excessive administration of an oral or injectable steroid. Although the steroids were usually given for a legitimate medical reason, in this case, their excess has become harmful to the patient.

What are the clinical signs of Cushing’s disease?

Regardless of the type, the clinical signs of Cushing’s disease are essentially the same. The most common clinical signs are an increase in appetite, increase water consumption,  and urinating more. The increased appetite is a direct result of elevated levels of cortisol, which stimulate appetite. Lethargy (drowsiness or lack of activity) and a poor hair coat are also common in pets with hyperadrenocorticism.

"Many dogs with Cushing’s disease develop a bloated or pot-bellied appearance."

Many of these dogs develop a bloated or “pot-bellied” appearance to their abdomen because of an increase of fat within the abdominal organs and a stretching of the abdominal wall as the organs get heavier. The pot-bellied appearance also develops because the muscles of the abdominal wall become weaker and eventually atrophy (shrink in size). Panting, thin skin, chronic skin infections (pyoderma), dark-colored spots (hyperpigmentation), skin mineralization (calcinosis cutis), poor skin healing, and persistent bladder infections are other common clinical signs with this disease.

How is Cushing’s disease diagnosed?

A number of tests are used to diagnose and confirm Cushing’s disease. The two most common tests to detect Cushing’s disease are the ACTH stimulation test and the low-dose dexamethasone suppression (LDDS) test.

Endogenous ACTH levels (the level of the hormone ACTH in the body), a high-dose dexamethasone suppression (HDDS) test, or a urine cortisol:creatinine ratio, are other tests that may be used to help determine the type of the disease.

"An abdominal ultrasound can be a valuable part of the diagnostic process for Cushing's disease."

An abdominal ultrasound examination can be a valuable part of the diagnostic process for Cushing’s disease. Ultrasound lets your veterinarian see the adrenal glands and determine their size and the presence of a tumor.

Although some of these tests can be expensive, they are necessary to determine the best treatment and prognosis for your pet. See handout "Cushing's Disease - Testing" for further information on testing for Cushing's disease.

What are the treatment options?

As previously mentioned, the treatment depends on which type of the disease is present.

Adrenal tumor. Treatment of an adrenal tumor requires major abdominal surgery. If the surgery is successful (the entire tumor is removed) and the tumor is not malignant, there is a good chance that the dog will regain normal health. If surgery is not an option, some of these patients can be managed with medication, as discussed below.

Iatrogenic Cushing’s disease. Treatment of this form requires discontinuation of the steroid being given. This must be done in a controlled, gradual manner so that other complications do not occur. Unfortunately, it usually results in a recurrence of the disease that was being treated by the steroid. Because the steroid may have caused adverse effects on the adrenal glands, treatment is also often needed to help replace the hormones that the adrenal gland normally produces.

What do I need to know if my dog’s disease is being managed with medication?

Your veterinarian will outline a treatment plan for your pet’s specific condition. Be sure to follow his or her guidelines closely, because these treatments often depend on consistent and regular administration of the medication. Lifelong treatment may be necessary.

"Most dogs can be successfully treated with few medication side-effects."

Most dogs can be successfully treated with few medication side-effects. However, your pet must be carefully monitored using blood tests and clinical signs. Follow-up blood tests are very important to be certain your pet is receiving the proper dosage and not too little or too much of the drug, both of which can cause complications.

Although neither medical treatment can cure a dog with Cushing’s disease, control is possible for many years if the tumor is small. If the tumor is large and affects the brain, the pet has a less favorable prognosis. The prognosis for patients diagnosed with malignant adrenal tumors is guarded to poor. In cases of benign adrenal tumors, however, surgery is usually curative.