Do Pets Have a Sixth Sense?

Do pets have a sixth sense?

Humans have five recognized senses. We taste, touch, smell, see, and hear. Likewise, dogs have the same five senses. But some people think that dogs are one up on us. Do you think dogs really have a sixth sense? 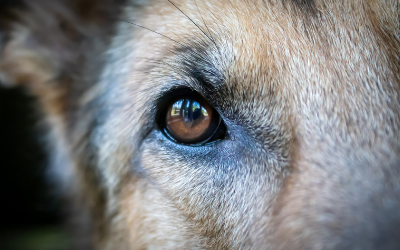 Dogs have a few visual advantages of their own. Dogs see better in the dark than humans. Canines have larger pupils that let in more light. Canine eyes also have more light sensitive cells (rods) in the center of the retina. Both of these adaptations mean better vision in dim light. In addition, the canine eye detects tiny movements that may elude us. The canine sense of sight makes them good hunters, especially at night.

When considering the sense of smell, dogs win by a nose! Their noses function about 10,000 times better than ours do. But the sensory competition isn’t over! Our sense of taste beats theirs. Humans have about 9000 taste buds as compared to about 1700 in the dog. Think about that the next time you order a yummy dessert!

Let’s call it a tie between human and canine regarding touch. Hearing is comparable, too, as far as quality of sound. But dogs can detect much higher frequencies and can hear at much longer distances than we can.

What is a sixth sense?

Like humans, dogs have five remarkably good senses, but do they have an elusive sixth sense? What is a sixth sense, anyway? Can it really be defined?

Think of a sixth sense as intuition or a “gut feeling”. The five recognized senses each give us a fragment of information about our environment or circumstances. A sixth sense draws from the cumulative information gathered by the other five senses to increase the level of awareness. Is it an additional sense or a heightened appreciation of the other five senses? Who knows? Regardless of your opinion, anecdotes involving the "sixth sense" are quite interesting. 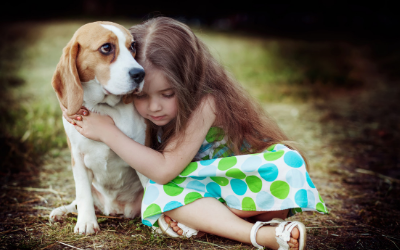 Human mood. Many pet owners note that dogs are quite intuitive. When we are happy, our dogs may be equally exuberant. Ever come home excited after winning a tennis match or getting a job promotion and watch your dog jump around excitedly? When we are sad, our dogs try to comfort us. Ever sit on the sofa in serious contemplation and have your pooch nestle beside you? Humans produce a group of “feel good” hormones such as oxytocin, serotonin, and dopamine. The levels of these hormones increase and decrease along with the elevation or depression of our moods. When we are sick, our dogs may detect a fall in hormone levels and respond accordingly. As they comfort us, hormone levels may rise and we feel better. How rewarding for our dogs when they detect this rise and realize that their presence helped us feel better! Our furry friends seem to know what we need. But how? Is it our facial expressions or our voice or our body language or our hormones or our smell? Or is it a sixth sense?

Hearing and smelling. Dogs have an acute sense of hearing, so they hear distant thunder before we do. They also smell changes in the atmosphere (ozone) better than we do, so they may sense an oncoming storm. Ever watch your dog anxiously pace through the house before a storm hits? Dogs have also been known to detect changes in seismic activity and feel minute movement before earthquakes occur. In addition to hearing, smelling, and feeling weather activity, dogs can detect changes in barometric pressure or electromagnetic fields. According to an Associated Press poll, 2/3 of pet owners think their pets have a sixth sense about weather. Who needs a weather forecaster when you have a dog?

Human illness. The dog’s keen sense of smell enables them to “sense” some human illnesses. When we are sick, our body chemistry changes causing the emission of certain aromas. Human noses may not detect these subtle changes, but a dog’s nose may. Capitalizing on this excellent sense of smell, dogs can be trained to detect specific volatile organic compounds (VOC) in humans that reflect ongoing illness. VOC’s are chemicals emitted by humans that exist in both gaseous and liquid states. By sensing VOC’s, dogs may assist in the early detection of lung cancer by smelling a person’s breath or bladder cancer by smelling their urine. The canine-VOC connection may eventually lead to advances in cancer diagnosis as researchers work to isolate the protein or chemical that alerts the dog. Dogs can also predict low blood sugar by detecting VOC’s emitted through the skin pores of a diabetic or predict a seizure by recognizing changes in VOC’s, pupil size, and demeanor in a patient with epilepsy. A service dog that is familiar with their owners “norm” can be especially accurate at discerning minor changes that can indicate a change in health status. When coupled with their ability to read their owner’s mood, service dogs are quite adept at predicting health problems and preventing injury. Sixth sense or super hero?

Daily activities. Dogs learn the routines of the people who live with them. They know when we are going to wake up, leave for work, and return home. Dogs sort of have an internal clock. Ever have your dog meet you at the front door when you arrive home from work? Maybe he just knows your schedule. But maybe it’s more. Ever have your dog waiting at the door when you come home unexpectedly? You’re not alone! In one study, hidden cameras were placed in homes where researchers had owners come home at random times. Despite the change in schedule, the dogs somehow knew when to go to the door to greet them. Did their acute sense of hearing and smell detect their owner’s presence or did their sixth sense kick in?

How can you sense your pet’s sixth sense?

We may not be as sensitive as our dogs, but even mere mortals can recognize when a dog’s sixth sense is on the job. Service dogs will respond, as trained, when their owner becomes ill. They will alert a person with epilepsy to an impending seizure or a person with diabetes to a drop in blood sugar and help them avoid injury by vocalizing or nudging them to sit down or pull the car to the side of the road. These responses utilize innate ability and professional training. But let’s not ignore the untrained responses of our amateur pet dogs. Dogs that detect oncoming bad weather may pace nervously and whine. They may hide. They may bark. They may seek out their owners. Dogs that detect changes in their owner’s mood may cuddle up next to them or beg to be petted. Dogs that detect illness may lick the owners incessantly and stay closely by their side. These responses may not be trained, but they are significant.

You know your pet and he knows you. Just pay attention to him and you may be surprised at how intuitive he is. And even though there is no scientific evidence regarding a dog’s sixth sense, we certainly have “sense” enough to appreciate our dogs’ abilities and how they integrate their other five senses in an amazing fashion.