Can I bring a new dog into my house with my existing dog?

Dogs are social animals whose evolutionary history makes them willing and able to live in groups. Group living enabled the dog’s ancestors, wolves, to work together to obtain food, raise their young and defend their territory. Much of a dog’s communication with other members of its species is by subtle, energy conserving body language and physical displays.

"It would be counter-productive for members of a
group to fight with each other and risk injury." 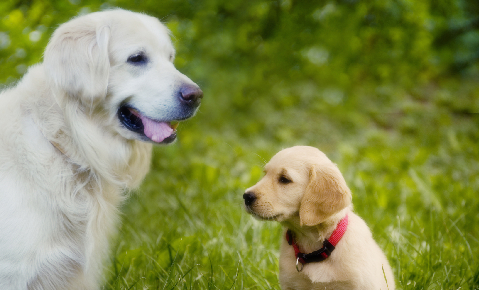 It would be counter-productive for members of a group to fight with each other and risk injury. Generally, most well socialized dogs strive to avoid physical or aggressive confrontation. However, these dogs may be living in close proximity to each other with limited opportunities to avoid confrontations or placed in frequent competitions over desirable resources, resting places or human interactions. Dogs that are not well socialized or have deficits either in their ability to interpret or communicate with other dogs are more predisposed to aggressive confrontations. Like people, not all dogs are natural or skilled communicators with members of their own species.

What are the important concepts I need to consider?

In many cases, dogs care about certain resources and may be unwilling to share them with a new dog. These resources include food, resting places, mates, territory and favored possessions. Ability to acquire these resources is generally communicated through facial expressions, body postures and actions. The more confident, bold, assertive dog may deem his chances good against a meeker, less confident and less successful opponent. Fighting is rare, since as soon as one dog submits or defers, the bolder animal gets its way, he or she gives up the challenge. These displays may appear nonexistent in some households while in others these displays are dramatic and may seem to support a clear hierarchy. If the access to resources is not properly worked out, this can result in ongoing social stress and misunderstandings and perhaps aggressive encounters between dogs.

Fights are most likely to occur over access to resources that are considered important to one dog more than the other (resource holding potential). These might include food, resting places, territory, favored possessions or social interactions with the owners. High states of arousal and resources that are particularly appealing or novel may increase the chances of aggression. It is also important to consider why you wish to add another dog and if you have the time to care for and meet the social, exploratory, training and veterinary needs of another dog. If the current dog does not interact well with other dogs, adding a new dog to the home may be difficult. It also will be important to consider the health, activity level and personality of the resident dog when adding a new individual.

A calm, quiet and shy dog may find a young exuberant puppy overwhelming. A bold outgoing dog may overwhelm a new shy puppy. Considering these issues will be important as you begin to blend your pets together.

How should I begin?

The first step is for you to have complete control over the resident dog. This can be accomplished through (a) verbal control with reward based training so that the dog can settle on command both in position (sit/focus) and on location (crate / mat), (b) a learn to earn program in which the owner controls access to all resources and all social interactions and ensures calm and deferent behavior before these are received, (c) a daily routine that provides sufficient training, play and exercise sessions alternating with rest times where the dog can nap or play with its own toys (preferably in its own bed area) and (d) physical control and safety, preferably with a leash and head halter. The leash and head halter provide a means of effective control as well as a way of separating the dogs if needed. With control of the head and mouth, aggressive threats can be curtailed and either dog can be placed in a subordinate posture, by pulling up on the leash, closing the mouth, looking the dog in the eyes, or pulling the head sideways so that the dog’s gaze is averted.

Initial introductions often go better in a more neutral surroundings, such as outdoors or in the yard. While leashes allow control, they also can inhibit normal posturing and movement and may make either dog more nervous if their social skills are poor. Both dogs should be watched for signs of distress, fear, or anxiety for body postures and facial expressions associated with fear, anxiety and aggression. Appropriate behaviors should be rewarded with praise and small food treats for each dog. If the dogs wish to ignore each other and wander around a bit, that is okay.

These initial sessions may need to be short and the dogs separated so that they can rest and relax. Each dog will need individual attention and social interaction so that their needs are met.

Always plan to feed the dogs in separate rooms, dogs may fight over food and separation allows each dog to eat without anxiety about the other dog. It also might be useful to introduce them during calm times such as watching television with each dog wearing a leash and head collar (see (66) Training Products – Head Halter Training) and rewarded for calm and quiet behavior. At bedtime, separation of the dogs is usually prudent initially to avoid any misunderstandings or fights during the night.

What if challenges occur? Should I punish the dogs if they are challenging each other?

Instead, if you can see that the dogs are about to fight, the dogs should be called, redirected, or encouraged to do something else. Ideally the resident dog is called to come, sit and stay. This must be taught and rewarded in a positive reinforcement program prior to introductions. If you call or punish your dog, then you will suppress the dogs’ communication when you are around. If the resident dog doesn’t obey, then you need to refresh its obedience commands in a separate occasion. Using a leash and head collar may allow safe management without escalation of human emotion adding to the aggression.

The new dog should be observed for willingness to retreat, move away, look away, and avoid confrontation. This is normal canine deference and as much as it may seem unfair to people, it is critical for a harmonious relationship among a group of dogs.

What should I do if the dogs start to play?

Social play should be allowed to continue as long as it does not escalate to aggression. If aggression is a possibility during play (or any other social interaction), you must be able to identify the signals and actions that indicate that aggression is likely to emerge so that you can stop the interaction.

Be aware of abnormal responses to social signaling because these are likely to escalate to fighting. This might be the case if the dog displaying confident signals continues to attack in the face of appropriate deference and subordinate behavior, or if the more subordinate dog displays excessively fearful or defensive aggression when confronted by normal social or distance increasing signaling from another dog.