Dog Behavior and Training - Dominance, Alpha, and Pack Leadership - What Does It Really Mean?

Despite the fact that recent studies have reevaluated hierarchy models and have modified our understanding of behavior in the wild wolf, the concept of a hierarchal relationship among dogs and humans continues to be perpetuated. To ensure a well functioning family group, a family needs to know more about canine behavior than outdated strategies focusing on pack structure. In fact recent research has clearly indicated that the longstanding theory which maintained that alpha wolves control through aggression and relentless management is more myth than fact. These theories have been refuted by wolf biologists and if this theory is no longer considered true for wolves, then how can it be considered true for our dogs? New research on canine learning patterns indicates dogs understand us far better than we understand them.

How do wolves behave in the packs? Aren't dogs just like wolves? 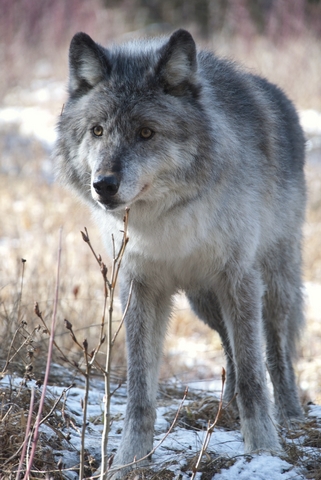 Decades of observation by wildlife biologists of free-ranging wolf packs have revealed startling insight into the lives of these majestic canids. For instance, seasoned leaders of wolf packs actually survey from near the back of the pack when traveling, rather than taking the lead position. Also, in times of scarcity, the leaders allow the young to eat first, rather than feeding themselves first. Wolf behavior experts, such as L. David Mech, have dedicated their lives to observing wolves in their natural state. Some interesting observations include: There is an absence of reports of wolves seeking high positions over the pack, there are no signs of a leader rousting a subordinate from a desired resting place, and an alpha wolf rarely initiates pinning (a dominance behavior). These experts who study wolf behavior describe the role of the wolf leaders as parents— guiding, teaching, and caring for their pack members. When the wolf offspring mature, they do not compete to overthrow the pack leader; instead, they leave the pack, find a mate, and start a family of their own. A parent-family model better describes wolf-wolf relationships than a competitive hierarchy model.

Aren't dogs just trying to be in charge?

Dominance hierarchy based training methods assume dogs are committed to a battle of supremacy and constant challenge with family members. This premise is incorrect and not supported by scientific study. Trainers advising families to take charge of the pack by eating first, walking through doors first, occupying a higher position and worst of all, pinning the dogs into submission are ignoring the current scientific research and subjecting the dog to unnecessary and sometimes cruel training methods. In reality, dogs have an intra-species relationship and a pattern of behaviors with their human family members that are driven by a variety of motivations, including: genetics, socialization, available resources, fear, conflicts, learning, behavioral pathology and disease. Furthermore, application of scientifically based principles of positive reinforcement, operant conditioning, classical conditioning, desensitization and counter-conditioning programs have been shown to successfully teach dogs desirable behaviors and prevent behavior problems while enhancing the human-pet bond.

1. Myth: Don’t let your dog walk ahead of you. If he is ahead of you on a walk, he will walk all over you in all other areas of your relationship!

Fact: Dogs may pull when walking on a leash for a variety of reasons. They may have the desire to play, explore, investigate or be social. This can become a learned behavior that is self rewarding; the reward being successful attempts to experience a new area’s odors, other dogs, and people. In other cases, dogs pull to get out of a fearful situation!

The second part of this myth is actually more damaging: how a dog walks on a leash does not reflect your relationship, it simply means you haven’t taught your dog to walk on a leash. Teaching a dog to walk nicely on a leash will not improve separation anxiety, aggression or phobias. However, this should not be confused with the fact that dogs that show excitable or aggressive meetings and greetings on walks may need to learn to walk calmly by the owner’s side as part of the behavior management program. Mostly walking nicely on a leash is about manners, training and enjoying something you should do with your dog frequently.

Fact: It is essential to meet the exercise and behavioral needs of your dog (and breed) by providing a variety of forms of enrichment. However, exceeding the exercise needs of your dog may actually be unhealthy especially for dogs with health concerns such as heart, respiratory or joint diseases. The fact is that exercise needs will vary according to breed, age, health and individual personality. In addition there are many ways in addition to exercise to enrich the lives of our pets including social, exploratory and mental stimulation (see Working for Food and Enrichment, Predictability, and Scheduling). A 2-mile run, a swim, and a chance to play with another dog may be ideal for some Labrador retrievers, while a bichon’s needs may be met by a short walk to the coffee shop and doing tricks for the other patrons. However, fulfillment of basic exercise needs alone does not prevent problems of boredom or unruly problems. Exercise does not prevent aggression, separation anxiety, phobias, or compulsive disorders. There are many athletically fit dogs that demonstrate aggression!

3. Myth: Your dog should wait while you pass through doorways before your dog.

Fact: Dogs should be taught nice manners at doorways: go out when told, wait when asked to and don’t knock people over. Doorways are man-made structures that have little significance to a dog. Most wolves have a narrow inconspicuous opening to their den and wolf biologists do not observe confrontations regarding the order wolves utilize a den entrance.

This is relevant for manners and safety – your dog should not knock you over as you pass through a doorway and he should not escape past you. In addition, if your dog tends to pull excessively or show aggression when meeting or greeting new people and pets, he should be trained to follow you out the door. However, adherence to these guidelines does not signify your dog’s respect, admiration or allegiance. In fact, a dog that is punished may learn not to go through a doorway when a specific person is around because he has learned from past experience punishment occurs; this is fear, not respect.

4. Myth: Eat before your dog; this shows him you are his alpha leader.

Dogs are scavengers by nature and while he may longingly desire what you are eating, he is not reflecting on his place in the pack while he watches you eat. Simply put, because we provide the food, our dogs cannot eat unless we give them the food regardless if we eat first or second. Dogs learn best by operant conditioning and food rewards facilitate that learning process much like a wolf would learn how to hunt a prey. A successful hunt means that a wolf will likely try that strategy again. By the way, wolves in packs do not display a meal time hierarchy: in times of plenty; everyone eats together and in times of scarcity the parent wolves make certain their offspring are fed first.

5. Myth: Don’t allow your dog on the furniture or on your bed. If you allow your dog to be on the same level as you, you are elevating his status and lowering yours.

Fact: Neither dogs nor wolves use elevated positions to infer social meaning. Wildlife biologists who have spent their lives observing natural wolf pack behavior do not observe acquisition of higher places to be associated with confrontation or challenge among wolves. Dogs or wolves may choose to occupy a comfortable location. They may select a location to observe prey or approaching enemies.

The pertinent questions become: Do you want your dog on the bed, couch or chair? Is it safe to have your dog in those places with you? Do you enjoy that interaction with your pet or would you rather not have dog hair in your bed? This is a personal decision based on how you enjoy interacting with your pet and if it is safe. This matter only becomes relevant for behavior issues if a dog is aggressive to people while in these vulnerable positions. So, cuddling in bed with a dog that may wake up suddenly and react by startled aggression is a bad idea because it puts people at risk for an aggressive episode not because the dog infers some hierarchal privilege by being in the bed.

6. Myth: If you establish eye contact with the dog, the dog must avert his gaze first.

Fact: Teach your dog to watch your face on cue; then you have his attention and if your dog is watching you instead of something else many problems can be avoided.

Dogs do display submission or appeasement by diverting their eyes. It can also mean fear, conflict or anxiety (see Canine Communication – Interpreting Dog Language). New research suggests that dogs have the innate ability to observe and learn from human gestures and eye gaze. Curiously wolves did not display this ability. Dogs can also be taught to watch a person’s face on cue and this can be very helpful in the prevention and treatment of behavior problems. For example, if a dog doesn’t like other dogs then while passing other dogs he can be given a “watch” cue and rewarded for watching his owner

Dogs are simply not trying to take over the pack or be in charge. Dogs are learning how to interact by assessing what works and what doesn’t with each interaction. Dogs are great students of human behavior and draw conclusions based on your actions. Punishment, deference and fear as training methods do not foster a mentally, emotionally and behaviorally sound dog. A mentally and emotionally healthy dog is not necessarily achieved with obedience training. Families that focus on socialization, positive reinforcement, avoidance-based strategies and clear and predictable interactions will be rewarded by a dog that is an enjoyable member of the family.