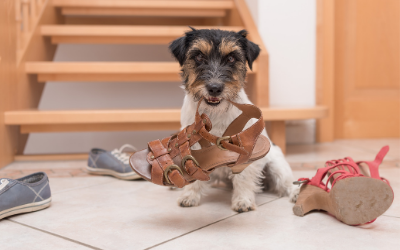 Some canine behaviors are innate. Long ago, dogs were bred to accomplish certain tasks. For example, a Border Collie may chase bikes because he was bred to herd sheep and wants to corral the bicycle. A Beagle may bark at a new scent or sound because she was bred to track and hunt. Some dogs repeat the survival skills of their ancestors that lived in the wild, so a Samoyed may dig a hole in the yard because he is trying to make a cool, comfortable bed outdoors.

Often what we view as problem behavior is just a dog being a dog. But, if your dog digs in the flower bed, scares the neighborhood kids while they ride bikes, or disturbs your sleep by barking all night, the behavior is problematic. By examining some common dog behaviors and the instincts that underlie these behaviors, we can better understand how to defuse situations without punishing the dog for “doing what comes naturally."

If your dog “misbehaves," try to rank his infractions. There are different levels of undesirable behavior.

1. Behaviors within the normal range for the age and breed of dog. Some annoying behaviors are just plain normal. For example, chewing in pups is expected while they are teething. Pet parents need to effectively redirect this temporary behavior so it does not become a persistent problem. Offer them suitable chew toys that are considered high value so they focus there and not on your favorite running shoes or couch.

2. Behaviors that lie within or just beyond the normal range. Some behaviors are challenging because, although they are considered normal, they may be harmful and difficult to manage. For example, it’s normal for dogs to mark their territory, but urinating on a new couch is a no-no. Understanding the basis of the behavior will help you deflect it. But you should have a realistic level of expectation. Cleaning up a little urine is part of being a dog owner.

3. Behaviors that lie outside the normal range and are considered problematic. Some behaviors are definitely abnormal. Serious behavior disorders may be the result of emotional issues related to insufficient early socialization, medical conditions, or genetic predispositions. Behavior problems like fear aggression or resource guarding require working with professionals who can provide training guidance and behavioral modification medications when needed.

Fortunately, most common canine behavior problems fall into categories 1 and 2 and are temporary or manageable.

When inherited behaviors pose a problem, find an outlet for the behavior that suits both you and your dog. Here are some common behavior issues that can be resolved or reduced so that human and canine family members live in harmony.

1. Barking. Almost all dogs bark, and pet owners know that they must endure a little racket. However, excessive barking that disrupts the household or disturbs the neighbors is a problem. Determine why your dog is barking. If he barks to get your attention, he may be insecure. Ignore him until he stops, then reward his quiet time. If your dog barks when someone knocks on the door, he is instinctively guarding his territory. Shouting at him to hush fuels the frenzy. Talk to him in a soothing voice and reassure him that the intruder is not a threat. If your dog barks when you return home because he is excited to see you, ask him to sit and give him time to settle down before playing with him.

2. Chewing. Chewing is natural for all dogs. Dogs examine the world with their mouths and may gently chew an object out of curiosity. Pups chew a lot because they have so many new things to examine. Plus, teething and chewing helps soothe sore gums. Unfortunately, some adult dogs chew when bored or excited and are destructive. Destructive chewing is an abnormal manifestation of a normal behavior. Try “doggie proofing” the house by placing items out of reach. Consider confining your dog to a crate when you are not around to supervise. Also, provide chew toys or high value rewards/treats such as stuffing a toy with some peanut butter or their kibble to give the dog an acceptable outlet for his chewing instinct.

3. Digging. Dogs historically dig to carve out a good place to sleep or to bury their treasures. Digging removes small branches and stubble that make for an uncomfortable bed. In hot climates, moving the topsoil exposes underlying earth that is cooler to sleep on. Make sure your dog has a cool, comfortable spot to rest outside. Digging is normal unless your dog digs excessively out of anxiety or boredom and destroys the garden or injures his paws. To combat boredom, exercise your dog more. Increased physical activity may decrease digging. You can also try using deterrents (noxious odors, electric fences). Or, as a last resort, you can try to redirect the digging instinct by creating a digging area in the yard where you bury small treats. While not optimal, sacrificing a small portion of the yard may save the flower garden! If the root cause is anxiety related, you need to try to identify the trigger and consider using some medications while working on modifying the behavior.

4. Chasing. A dog’s predatory or herding instinct precipitates the need to chase moving objects or people. This behavior puts both the chaser and the one being chased in peril. Train your dog to “freeze” on command and come when called. Keep him on leash when walking and be aware of potential triggers such as kids on bikes or joggers. Fill his need to chase by playing fetch in the safety of your own back yard.

5. Biting. Pups may nip at other dogs or people as a result of inherited pack mentality while they learn their place in their pack or family. This is normal, but when biting extends beyond puppyhood or becomes harmful, it is abnormal behavior. Some dogs only bite when they are in pain, feel threatened or fearful, or are guarding their territory. These behaviors are understandable, but can still be harmful. Some dogs display dominance aggression and are simply dangerous. Constant owner vigilance, responsible breeding practices, early training, and socialization can reduce problem biting.