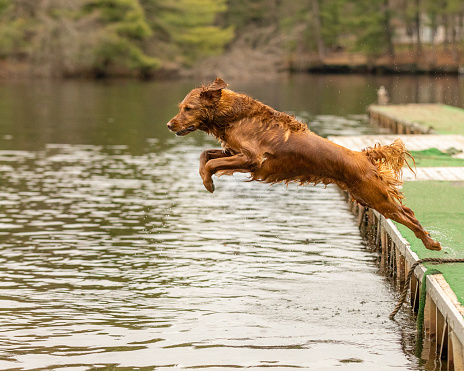 Dogs love to run. Dogs love to jump. Dogs love to swim. If your dog likes to do all three, why not investigate the relatively-new canine sport of Dock Diving? Dock Diving, also called Dock Jumping, is a competitive event where dogs are judged on how far or how high they leap from a stationary dock into a body of water. Introduced in 1997 by the pet-food giant Purina, the sport has become popular not only in the United States, but in the United Kingdom and Australia as well.

How is it set up?

As with all competitive sports, a level playing field is important, or in this case, a level dock. The launching pad must meet certain standards. Docks measure 35-40 feet long and 8 feet wide. The surface of the dock is covered with a material that optimizes traction and enhances safety of the canine athletes (carpet, rubber, or artificial turf).

At the start of the competition, the dock is 2 feet above the water’s surface, but this may change as water levels drop due to evaporation or splashing dogs. A man-made body of water must be at least 4 feet deep, but the depth of natural ponds varies. When diving into dark water, care must be taken to ensure that there are no submerged objects that could injure the dogs.

One dog and one handler make up a team. The handler stands alongside his dog on the dock and coordinates the jump. In most events, the jump distance is measured from the center edge of the dock to the point where the base of the dog’s tail (where the tail joins the lower back) breaks the water’s surface. Although a handler can start his dog’s jump from any spot on the platform, it is best for the dog to leap from the end of the dock because the jump is measured from dock’s edge, not from where the dog leaves the dock.

Each competing team takes two jumps during a heat in round-robin format with the score based on the longest jump. Accuracy is important, so many events measure distance electronically using digital video freeze-frame technology while others rely on manual measurements by teams of 2 judges.

How do handlers get their dogs to jump?

Jumping is the foundation of Dock Diving, but how do handlers get their dogs to leap off of a comfortable, secure dock into the water? Here are two methods that encourage a dog to take a flying leap:

Place and Send. The handler holds onto his dog and walks him to the end of the dock where he tosses a toy into the water. He walks the dog back to the starting point, places the dog, then sends the dog to retrieve the toy. This technique works well for dogs that do not like to “stay” while their owner walks to the end of the dock to throw the toy.

Chase. The handler places the dog in position and commands him to stay. The handler walks to the end of the dock, calls the dog and throws the toy as the dog approaches the end of the dock. The goal is to keep the toy just in front of the dog’s nose so that he chases it into the water. When the toy is tossed at just the right angle at just the right time, the dog leaps up instead of out flat and increases the distance of his jump.

What are the categories my dog could compete in?

There are different categories of competition in Dock Diving.

Big Air® is a long jump for dogs. The dog runs down the dock and leaps into the water after a thrown toy. The distance is judged from the end of the dock to where the tail breaks the water’s surface.

Speed Retrieve™ is a timed event. A toy is suspended two feet above the water at the far end of the pool where an indicator light is located. Standing at a designated 20-foot point on the dock, the dog starts his run when the indicator light turns green. The time clock stops when the airborne dog leaps up and pulls down the toy.

Extreme Vertical™ is a high jump for dogs. Starting at the 20-foot mark on the dock, the dog runs and jumps vertically to snatch a toy suspended over the water. The toy is suspended 8 feet from the end of the dock at a starting height of 4’6” and is raised as competition progresses.

My dog is so small – how would he ever compete?

To further level the playing field, competition is divided into categories that allow dogs to compete with canines of comparable ability. Divisions vary according to the sanctioning organization and teams are rated within their own division. Among the divisions are “lap dogs” for small dogs and “veterans” or “legends” classes for senior dogs.

Are there any rules?

"Only dogs are allowed in the water – no diving for handlers!"

Only dogs are allowed in the water – no diving for handlers! During a competition, the handler cannot physically propel the dog forward down the ramp and can only “tap” the dog for encouragement. Treats and food rewards are not permitted.

Some handlers enter more than one dog in a competition, so while a dog can only compete once during a “heat” or “wave,” the owner can work several different dogs in the same heat.

Winners of each heat advance in the competition. At the end of the competition, rewards are bestowed upon the overall winners. Of course, the real reward for dock diving is the satisfaction owners receive by watching their dog perform well and the fun they have training and competing with their dog.