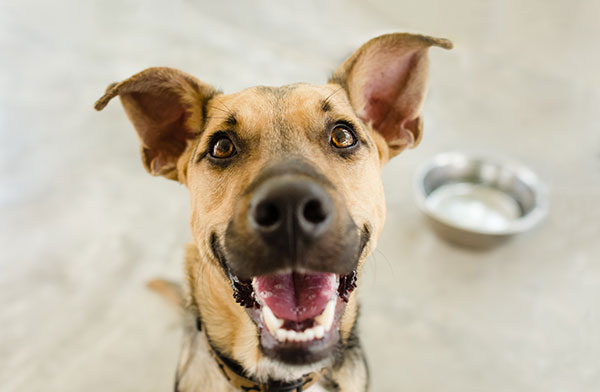 Is it okay for me to feed my dog raw food? Is that better than feeding prepared dry or canned food?

The Centers for Disease Control and Prevention (CDC), the Center for Veterinary Medicine (CVM), and the US Food and Drug Administration (FDA) stand united in their position (based on very robust data) that feeding raw food to dogs is potentially dangerous to both the dog and to you.

A study conducted from 2011 through 2012, screened commercially available raw dog foods for bacteria that can cause illness. The raw dog food products were made from ground meat or sausage and frozen in tube-like packages. Nearly 25% of the raw food samples tested positive for harmful bacteria, including Salmonella ssp. and Listeria monocytogenes. These bacteria can pose a health risk for the dogs who eat the raw food, as well as for the dog owners who handle the food while preparing it.

What kind of illness does Salmonella cause?

The CDC estimates that 1.2 million or more cases of food-borne salmonellosis occur in humans in the US annually. Approximately 400 people die each year from the disease. There is some uncertainty as to the total number of cases because milder cases may not be diagnosed.

Symptoms of salmonellosis in humans generally start 12 to 72 hours after exposure and include:

Children, the elderly, pregnant women, and immunocompromised individuals (patients on chemotherapy, with HIV, etc.) are at greater risk for more severe symptoms.

Dogs can actually carry Salmonella in their intestines without showing signs of illness. This makes them a potential reservoir for ongoing exposure to the humans in the household. In dogs, the symptoms of salmonellosis include:

What about illness from Listeria food contamination?

Listeriosis is a less well-known food-borne illness than salmonellosis. Listeria monocytogenes is actually a leading cause of hospitalization and death from food contamination. While it is rarer than salmonellosis, over 90% of people with listeriosis end up in the hospital. In the US annually, the CDC estimates about 1,600 cases with about 260 deaths. In the European Union, the numbers are similar. One of the problems with Listeria is that the bacterium is quite hardy, surviving in salty, acidic, and cold environments.

"...over 90% of people with listeriosis end up in the hospital."

Listeriosis particularly targets newborns, the elderly, pregnant women, and those with compromised immune systems. The L. monocytogenes bacterium can invade many tissues, including the brain, the tissues surrounding the brain and spinal cord, the gastrointestinal tract, and the bloodstream. Symptoms depend on which tissues are affected. The time between exposure and illness is about three weeks, making it difficult to pinpoint the precise exposure event. Pregnant women may only experience non-specific flu-like symptoms, but their babies may be born prematurely or even stillborn. Newborns fare the worst with listeriosis as up to one-third will die despite aggressive treatment.

Dogs can carry L. monocytogenes without showing any signs, making them a potentially dangerous reservoir.

Is there any way to protect myself and my family should I occasionally choose to offer raw food to my dog?

The best protection against salmonellosis and listeriosis is to avoid the bugs altogether by not feeding raw food to your dog. Be aware that by feeding raw dog food you can infect yourself and the other people in the household. That said, here are some ways in which you can protect yourself if you handle raw dog food:

Thoroughly wash your hands with soap and water after handling raw dog food.

Clean and disinfect all surfaces and objects that come into contact with raw food.

Keep raw food frozen until you are ready to use it, and then thaw it in the refrigerator or microwave (not in the sink or on the counter).

Use a completely separate set of dishes, storage containers, and cutting boards for your pet’s raw food.

Cover and refrigerate what your dog does not eat, or discard the leftovers safely.

Do not kiss your dog on the face or allow him to lick your face, particularly right after he has eaten raw food.

Wash your hands after petting or being licked by your dog.

Feeding a raw diet to your dog is a potentially unsound idea from a nutritional perspective as well, due to the difficulty in balancing the ration among macro- and micro-nutrients. If you do decide to feed a raw diet, be certain to consult with a veterinary nutritionist to make sure the diet is balanced and complete.

If I follow all of the above recommendations, are there any other considerations?

Remember that many animal care facilities such as animal hospitals and kennels will NOT accept animals fed raw food diets as boarders or in-house patients due to the potential for disease spread. The American Veterinary Medical Association (AVMA) recommends that "animals that have been fed any raw or dehydrated (but otherwise raw) foods, chews or treats of animal origin within the past 90 days should be excluded from health-care facilities.”

"There are also no clinically proven benefits of a raw food diet..."

There are also no clinically proven benefits of a raw food diet, but there are documented hazards and risks. In addition to the potential for nutritional deficiencies and harmful bacteria and parasites, the presence of bones in a raw food diet can lead to perforation or obstruction of the gastrointestinal tract. Chewing on these bones may also lead to dental fractures.

Given all of these negatives, it is reasonable to conclude that a commercially prepared, conventional, complete and life-stage balanced dog food is a better choice. Your veterinarian can help you to choose the nutrient profile that best fits your dog.