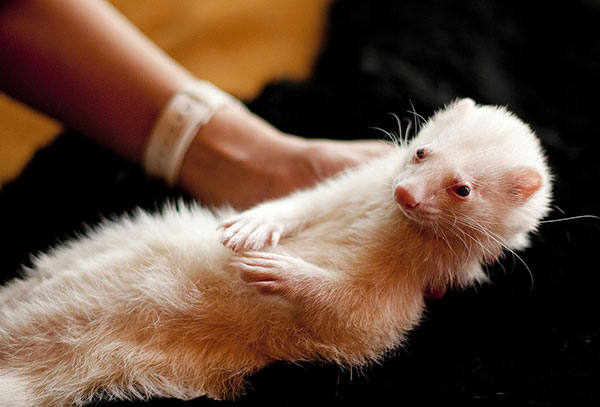 What do I look for?

"...they tend to disappear only to return again."

These tumors are often present for months and may be ignored by owners because they tend to disappear, only to return again. They might be mistaken for an insect bite. In the ferret, mast cell tumors tend to fluctuate in size but are often 1 cm (3/8 in) or less. They tend to be circular, flat or slightly raised masses found anywhere on the body. Some are very itchy and may be found after the ferret has scratched them. They may be ulcerated and bleeding, leading to a round sore and crusty scab with hair matted over top. If the scab falls off, the lesion may be red, oozing, and hairless. Once the scab falls off, the lesion heals, only to erupt several weeks to months later.

How are they diagnosed?

A mast cell tumor will be suspected if the mass has the classic appearance described above. They can often be diagnosed by cytology, a microscopic examination of cells collected by tissue scrapings or fine needle aspiration of the tumor. A biopsy sample may be submitted to a laboratory for a definitive diagnosis.

Can they be treated?

Yes, mast cell tumors in ferrets can be treated. Complete surgical removal is usually considered curative. It is recommended to have histology done on the removed tissue to confirm the diagnosis.

Unlike dogs and cats, mast cell tumors in ferrets rarely require medical therapy. Bear in mind that new mast cell tumors may form in a different location on the skin, but recurrence is not due to metastasis or spreading of the initial tumor.

If you detect any sore or skin lump on your ferret, you should have it examined by your veterinarian as soon as possible.