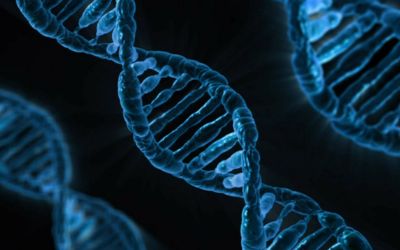 Deoxyribonucleic acid (DNA) is a long molecule that contains an animal’s (and all known living organism’s) entire genetic code. Every cell in the body is created with identical strands of DNA.

"DNA determines each cell’s structure and function, therefore determining the overall appearance, health, and actions of the entire animal."

DNA determines each cell’s structure and function, therefore determining the overall appearance, health, and actions of the entire animal. All inherited traits are transmitted by an animal to its offspring in the DNA.

Where is the DNA located?

DNA is primarily located within the nucleus of each cell, where it is contained in structures known as chromosomes. The nucleus is a large area in the center of the cell, responsible for controlling the cell’s activities. Chromosomes are threadlike structures within the nucleus, containing DNA bound tightly with stabilizing proteins that help the DNA maintain its structure. Additionally, a small amount of DNA is located in another area of the cell called the mitochondria, which is responsible for the cell’s energy production.

What are the components of DNA?

DNA is made up of four bases: adenine (A), guanine (G), cytosine (C) and thymine (T). These bases are the basic units of DNA, and allow the DNA to control the cell’s activities.

Each DNA base has a base with which it typically pairs; A and T always pair together, while C and G always pair together. These base pairs come together like the rungs of a twisted ladder. The outside of the ladder is made up of sugar and phosphate molecules, with base pairs bridging the gap between these two strands of external support. This shape is called a double helix.

How does DNA control an animal’s appearance and health?

In the nucleus, special enzymes transcribe the DNA bases into a substance called RNA (ribonucleic acid). This RNA serves as a messenger, taking the DNA message out into other areas of the cell. It is carried from the nucleus and into the cell’s cytoplasm (semi-fluid substance in cells), where the RNA is translated into proteins. These proteins are responsible for a number of functions in the cell and throughout the body, primarily by acting as enzymes that regulate various cell reactions.

How does a cell make DNA?

The paired nature of A/T and C/G is important in allowing for the duplication of DNA. When a cell needs to replicate its DNA for cell reproduction, special enzymes come in and “unzip” the DNA double-helix structure. This creates two single strands of DNA, with exposed base pairs. Each strand of the DNA can then serve as a template for duplicating a new strand of DNA. Each exposed A attracts a T, each exposed T attracts an A, each exposed C attracts a G, and each exposed G attracts a C. A new sugar and phosphate backbone is built along the exposed edge of each DNA molecule. This allows the creation of two identical new strands of DNA, one of which can be passed to each cell.

How much DNA is in a cell?

Dogs, cats, and humans each contain approximately 2.5–3 billion base pairs in their DNA, comprising about 20,000–25,000 individual genes. Not all of a cell’s DNA codes for actual protein sequences; much of the DNA is involved in replication, scaffolding, and other purposes.

How can the information in DNA help us make breeding decisions?

The recent development of a number of different DNA tests allows us to use DNA to make educated decisions about breeding. These DNA tests allow us to examine an animal’s DNA in order to see whether they carry certain genetic diseases.

Are there any other uses for DNA?

In addition to genetic testing for specific diseases and traits, DNA testing can also be used to determine the ancestry of an animal. This testing can be beneficial for owners who would like further information the heritage of their mixed-breed pets.