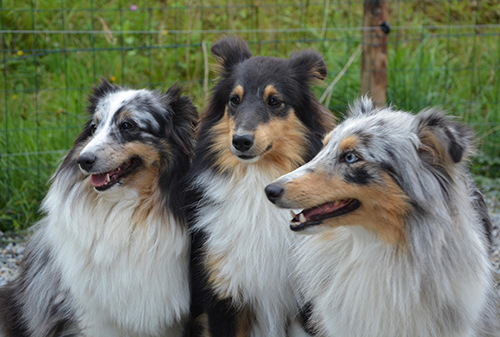 Gregor Mendel was an Austrian monk who, through his scientific work with pea plants, became known as the father of genetics. Mendel illustrated that genes come in pairs with one inherited from each parent. This may sound like a simple gardening experiment, but from pea plants to dogs to humans, genetics is complex.

DNA is not as simple as ABC

The nuclei of dog cells contain important genetic data. The dog has 39 pairs of chromosomes in each cell (39 from the mother and 39 from the father). One of these pairs determines the sex of the dog and the rest determine everything else that makes him or her unique. Chromosomes are made up of thousands of genes that carry traits inscribed in DNA (see article “Genetic Basics: Understanding DNA” for more information).

"...the mother and father each randomly contribute one allele from each locus, giving each allele a 50% chance of being passed on to the pups."

Genes have pairs of alleles (one from each parent) that are located at specific sites (loci) on a chromosome. When dogs breed, the mother and father each randomly contribute one allele from each locus, giving each allele a 50% chance of being passed on to the pups. One of the alleles at each locus is dominant and determines the traits, like coat color, portrayed in the dog.

It starts with two colors

Despite the huge variety in coat color, there are only two basic pigments that determine the color of canines: eumelanin (black) and phaeomelanin (red). All different variations in color are created by these two pigments, which are both forms of melanin.

"...there are only two basic pigments that determine the color of canines..."

Melanocytes are the cells within the hair follicles that add melanin to the hair as it grows and determine basic coat color. The more melanin, the darker the color. Melanin is not always produced at a steady rate, so the tip of a dog’s hair may be darker than the rest of the hair shaft.

Each of the pigments, eumelanin and phaeomelanin, has a "default" color that can be modified by various genes. Eumelanin is, by default, black pigment, but variation in color occurs because genes modify eumelanin to create other colors such as liver (brown), blue (grey), or isabella (pale brown). Genes essentially “dilute” the pigment into these other colors by preventing the production of full strength eumelanin.

Phaeomelanin is the second pigment that determines canine coat color. This pigment is red with a default color of gold or yellow. Phaeomelanin creates reds that range from deep red (Irish Setter) to orange, cream, gold, yellow, or tan. Genes control the intensity of phaeomelanin, making the color stronger or weaker. This pigment is produced only in the coat and affects only hair color, while eumelanin affects eye and nose color. Phaeomelanin in people is responsible for freckles!

Eumelanin and phaeomelanin in all their forms create a huge range of dog coat colors. White hair on dogs occurs when cells do not produce any pigment at all. Most of the time this affects certain portions of the dog’s coat. For example, you may see a colored dog with white markings. If eumelanin is not produced in the nose, the dog ends up with a pink nose. If eumelanin is absent in the eyes, the dog has blue eyes. Rarely, the entire coat is affected, resulting in an albino dog with red eyes.

Genetics expands the range of these two colors.

A (agouti) locus. This site is responsible for different coat patterns in the dog. Agouti protein controls the release of melanin into the hair and is involved in switching between the two pigments (eumelanin and phaeomelanin).

E (extension) locus. This locus creates the black facial mask of many dogs as well as yellow or red coats. The four alleles of this gene in order of dominance are: melanistic mask (Em), grizzle (Eg), black (E) and red (e).

B (brown) locus. This locus is linked to brown, chocolate, and liver. There are two brown alleles, B (dominant brown) and b (recessive brown). It takes two recessives (bb) to dilute black pigment to brown. For dogs in the red or yellow pigment family (phaeomelanin), the brown allele can change the color of the nose and foot pads to brown.

D (dilute) locus. This genetic site is responsible for diluted pigment which lightens coats from black or brown to gray or blue or very pale brown. A mutation in the melanophilin (MLPH) gene is the cause of color dilution. The two alleles associated with dilution are D (dominant full color) and d (recessive dilute). It takes two recessives (dd) to lighten black pigment to gray or blue and red pigment to cream.

M (merle) locus. The mutation that causes merle in all its forms has been identified. This site creates coats of irregularly shaped patches of diluted pigment and solid color. Merle only dilutes eumelanin (black) pigment. Dogs with red or yellow pigment are not merle but can produce merle pups.

H (harlequin) locus. This site is associated with white dogs that have black patches and often interacts with the Merle locus to create different combinations of spots and colors.

Each of these loci works alone or in conjunction with another locus to control the production and distribution of eumelanin and phaeomelanin. The combined efforts of all the loci determine the color of the dog. But a dog of one color may carry hidden colors in his gene pool that may appear in his/her pups. That is why you may have pups that are not mirror images of either parent.

The color of a dog’s coat is basically at the mercy of his gene pool. Genes do two things that determine a dog’s appearance. They control the pigments produced (eumelanin and phaeomelanin) and where these pigments are produced. Genes rule by telling some cells to make eumelanin, others to make phaeomelanin, and still others to make no pigment whatsoever. Genes can even tell a cell to switch gears and change from the production of eumelanin to phaeomelanin to create a hair that is both black and red!

Although it sounds like color may be determined by a roll of the dice, Mendel showed us years ago that genetics is a science that controls an organism’s characteristics…even the color of a dog. And with a sound knowledge of genetics, dominant vs. recessive genes, mutations, and possible alleles, predicting the color of puppies is a statistical probability. From two pigments comes multiple variations in canine coat color… and that is what makes your dog unique!