Guilty or Innocent? Do pets know they have done something wrong when they act "guilty"?

Chewed slippers. Scratched furniture. Shredded curtains. Here lies the evidence that your dog or cat is guilty of a domestic infraction. Is their doleful look an indication of said guilt? Do they realize they did something wrong? Or do they wonder why in the world you’re upset? Regardless of how solid the evidence is, it’s hard to convict a pet that doesn’t understand the charges.

Do pets understand right from wrong? 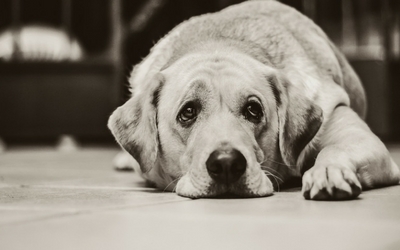 Do dogs and cats instinctively understand right and wrong? Does your dog know that eating the cake left on the coffee table is a no-no? Does your cat grasp the concept that peeing on the new carpet is not acceptable? Probably not! Innately, pets focus on the basic requirements for survival. They need to eat and eliminate in order to live. Scarfing down the cake and squatting on the rug fulfill these basic needs. So, what’s wrong with that??

"Innately, pets focus on the basic requirements for survival."

Pets may not feel a sense of wrong doing because they don’t understand that what they did was wrong. Do you think your dog really understands that it’s wrong to eat cake left within his reach on the coffee table? Likely not. He sees an accessible treat and eats it. Do you think your cat really understands that urinating on the rug is wrong? Likely not. He sees a soft surface to squat on that absorbs his urine rather than splashing it back up on him. Knowing you committed a misdeed is necessary for true guilty feelings. If your pet doesn’t understand that his actions are wrong, how can he feel guilty?

"pets can learn right from wrong"

Nevertheless, pets can learn right from wrong. How do they do this? We teach them. We provide consistent, timely responses to their actions, establish a pattern, and they eventually associate their actions with predictable consequences.  A timely response is key. If you catch your dog eating the cake or see your cat squatting on the carpet and quickly intervene, they will get the message. Uttering a firm, “NO!” as you steer them away from the cake or rug and place them in front of the food bowl or litter box is a good lesson.

But, reprimanding a dog or cat for an infraction committed 10 hours or even 10 minutes ago doesn’t teach them right from wrong. Pets don’t associate prior actions with delayed reactions. In other words, if you fuss about the torn up newspaper when you come home from work, you are wasting your energy. Your pet cannot make the association between your present response to something he did in the past.

So, do pets understand right from wrong? Yes, but only in the moment.

When you discover your favorite slippers have been destroyed or your new sofa is scratched, you naturally respond with a scowl, a sigh, or maybe even a shriek. Your cat or dog immediately responds with a submissive posture that you interpret as guilt. But this submissive action doesn’t reflect guilt. It is an effort to appease or calm you. And it often works! You look at that sad face and cave. Your anger and frustration evaporate! Would you be so forgiving if your pet bounded up to you tail wagging with your favorite chocolate candy all over his face?  Of all the nerve! How can this creature of destruction look so happy after ruining your sofa/slippers/dinner/etc!

So, are guilty looks significant? Of course! They just don’t signify guilt. They signify fear, concern, and anxiety of the pet in response to the agitated, angry look and sound of their owner.

One learned professor and author devised an experiment to determine a dog’s ability to feel guilty after doing something wrong. In the experiment, a treat was positioned in front of a dog. The owner instructed the canine not to eat the treat and left the room. Some dogs ate the treat while others refrained. When the owners returned, the researchers told some of them that their dog ate the treat when he actually did not. When these ill-informed owners scolded their dogs, the innocent dogs looked guilty nonetheless. The experiment concluded that the dogs looked guilty not because of what they did (after all they did nothing wrong), but rather as a reaction to what the owners did.

"The experiment concluded that the dogs looked guilty
not because of what they did...
but rather as a reaction to what the owners did."

Submissive dogs lower their heads, hunch down, and avert their eyes when trying to diffuse a situation or appease their owners. In multi-dog households, the guilty looking dog may actually be the innocent pooch. For example, if two dogs are home and Dog A chews the newspaper, Dog B may look guilty because he is the peacemaker of the pair.

Another experiment further validated the appeasement theory. Owners left dogs alone with food on the table. When the owners returned they weren’t told whether or not their dog ate the food so they responded positively to their pups. Clinical observers assessed the dogs’ behavior and noted that the guilty and innocent dogs greeted their owners in the same manner. The owners looked happy, so the dogs did, too. The conclusion is that dogs look guilty for reasons unrelated to their actions and closely related to our actions.

Guilty or Not Guilty. Should we care?

Now don’t think the inability to feel guilt will result in an incorrigible pet. Our pets do understand that certain actions violate family rules and will result in certain reactions. Cause and effect is a great lesson! Pets don’t have to feel guilty to be well-behaved. But even if pets do feel guilty sometimes, let’s not assume that their guilty looks are always based on their behavior.

We have lots of feelings for our pets. Let’s leave out the guilt and focus on love and affection!