What is Horner's syndrome?

Horner's syndrome is a common neurological disorder of the eye and facial muscles, caused by dysfunction of the sympathetic nervous system. The condition usually occurs suddenly and typically affects one side of the head but can be bilateral in rare cases.

What is the sympathetic nervous system?

What are the clinical signs of Horner’s syndrome?

The most common clinical signs of Horner's syndrome are:

If the sympathetic nervous system that supplies the eyes is damaged or is malfunctioning, the parasympathetic system 'takes over', and signs of Horner's syndrome appear. The damage or malfunction can occur in the areas of the neck, the ear, or the eye. Damage may occur because of blunt force trauma such as that caused by an automobile accident or because of a bite wound from another animal. Other problems that can cause damage or inflammation of the nerves in this area include diseases within the eye or in the retrobulbar area (behind the eye), problems in the middle ear (otitis media), or tumors in the chest, neck or brain.

"With many cats that develop Horner's syndrome, there is a recent history of trauma, particularly being hit by a car."

Depending on your cat's recent history and other physical findings on examination, your veterinarian may recommend a series of diagnostic tests to determine if there is an underlying cause. Initial tests will usually include a neurologic evaluation, an otoscopic examination (examination of the ears), and X-rays of the chest and neck area.

Are there any other problems that could look like Horner's syndrome?

In some cases, the only obvious symptom is elevation of the third eyelid. If this is the case with your cat, your veterinarian will rule out the possibility of problems such as facial paralysis (common with severe ear infections), severe dehydration, or Haw's paralysis. With Haw's paralysis, cats will elevate their third eyelids in response to illness, particularly intestinal irritation; the third eyelids may remain elevated for up to 4-6 weeks, but will eventually go back to normal. There is a rare disorder in cats called feline dysautonomia (Key-Gaskell syndrome) that has symptoms of constricted pupils, elevated third eyelids, urinary retention, constipation, and other problems related to severe disruption of the sympathetic nervous system. 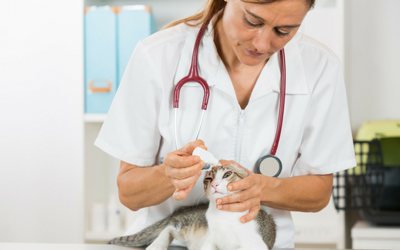 Most cases of Horner's syndrome will resolve spontaneously or on their own over time. Since your cat may have an inability to blink normally, your veterinarian may recommend symptomatic treatment in the form of eye lubricants to minimize the development of corneal ulcers from what is called 'exposure keratitis'. Other symptomatic treatment that might be recommended is the use of phenylephrine drops in the affected eye to dilate the pupil. If an underlying disease is identified, it is important to treat that disease.

What is the prognosis and recovery rate?