What is a laser and how does it work?

LASER is an acronym for light amplification by stimulated emission radiation. In short, it is a device that generates a beam of light energy at a specific wavelength. The first laser was developed in, and its use in human surgery became widespread in the late 1980's.

What are the benefits of laser surgery? 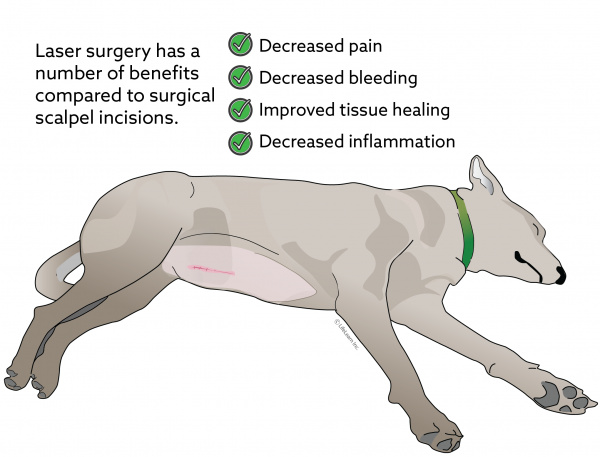 Decreased Post-Operative Pain. Decreased pain is accomplished when the laser seals the nerve endings as it cuts. This reduces pain impulses from the surgery site in the immediate post-operative period. Also, the decreased pain involved with laser surgery may allow the surgeon to remove small skin tumors using local anesthesia rather than having the pet undergo general anesthesia.

Reduced Bleeding and Blood Loss. Blood loss is achieved through cauterization of blood vessels as the laser beam vaporizes the tissues.

Reduced Risk of Surgical Infection. Reduced infection occurs due to the superheating of the tissues in the incision site, destroying any bacteria that are present at the time of surgery.

Reduced Inflammation. Because the only thing that comes in contact with the tissue is the laser beam, it causes less irritation resulting in minimal swelling.

Laser surgery offers your veterinarian greater precision and can reduce the length of the surgery.

What surgeries can be performed with the laser?

Almost any soft-tissue surgery may be performed with the CO2 laser. Routine procedures such as ovariohysterectomy (spay) or castration (neutering) are commonly done with the laser. The CO2 laser is also used for skin tumor removal, eyelid surgery such as correction of entropion or ectropion, and some mouth and throat procedures. Your veterinarian will discuss whether CO2 laser is appropriate for use during your pet's surgery.