What is Legg-Calve-Perthes disease? 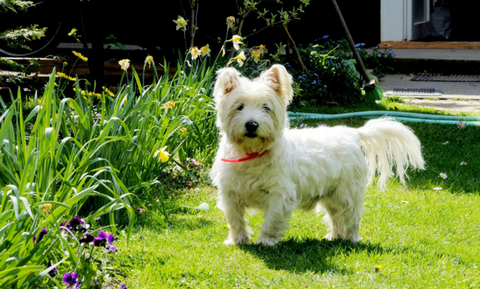 Legg-Calve-Perthes disease is also known as avascular or aseptic necrosis of the femoral head. This is a condition in which the head of the femur (the ‘ball’ in the ball-and-socket joint that forms the hip) spontaneously begins to degenerate. Over time, this degeneration will cause collapse of the hip and lead to arthritis.

The exact cause of this condition is unknown. Studies suggest that disrupted blood flow to the hip may be involved and this disruption may be due to clots within the blood vessels. The bone begins to weaken and deteriorate, leading to small fractures. Over time, scar tissue may develop to stabilize the bone, however changes in the bone structure will lead to arthritis. A genetic cause for this condition is suspected, though this has not been confirmed.

What are the signs of Legg-Calve-Perthes disease?

Legg-Calve-Perthes disease causes a dog to limp on the affected leg. The limping often begins gradually and progresses over a period of several weeks, eventually causing the dog to place no weight on the affected leg. In some cases, pain and lameness can develop suddenly. It is uncommon for Legg-Calve-Perthes to affect both hips – an affected dog usually limps on only one rear leg.

"In some cases, pain and lameness can develop suddenly."

Affected dogs may be very painful when the affected leg is handled or manipulated, especially in later stages of the disease. Additionally, dogs will often lose muscle mass in the affected leg, because they are no longer using the leg.

Are there any characteristics that predispose a dog to Legg-Calve-Perthes disease?

Legg-Calve-Perthes disease is most commonly seen in small dogs, under 20 lbs. The disease most commonly affects terriers and toy breeds. Lameness is most frequently observed between five and eight months of age, but can be seen as early as three months or as late as 18 months. Legg-Calve-Perthes disease affects male and female dogs with equal frequency.

How is Legg-Calve-Perthes disease diagnosed?

Legg-Calve-Perthes is diagnosed by radiographs (x-rays). The radiographic appearance of an affected hip changes over the course of the disease, so multiple, repeated radiographs are often necessary to confirm the diagnosis.

In the early stages, radiographs may show only a subtle flattening of the head of the femur. As the disease becomes more advanced, the head of the femur may take on a ‘moth eaten’ appearance as bone is resorbed. In late stages of the disease, the femoral head will become deformed with significant evidence of arthritis in the joint.

If my dog is diagnosed with Legg-Calve-Perthes disease, what can be done?

Mild cases can often be managed with medical therapy. Pain medication is often used to keep the dog comfortable. Additionally, it is important to make sure that affected dogs do not become overweight, as this will increase the strain on the joint.

"In severe cases, your veterinarian may recommend surgery."

In severe cases, your veterinarian may recommend surgery. The most common surgery performed for Legg-Calve-Perthes is a femoral head and neck osteotomy (FHO). In this surgery, the head of the femur is surgically removed, allowing the body to heal with scar tissue. This is considered a salvage procedure, and is only recommended for dogs who do not respond to medical therapy.

Another surgical alternative is a total hip replacement (THR). In this procedure, implants are used to recreate a functional hip joint. Although this sounds like a better procedure than a FHO, studies show similar outcomes between the two procedures. Therefore, FHO is often performed first due to its significantly lower cost. If a patient does not experience pain relief with an FHO, however, THR can be considered.

Even after surgery, your will still need physical therapy and medication to aid in his recovery. Dogs often receive a course of pain medication after surgery and are recommended to stay on chondroprotective agents (such as glucosamine) long-term to help protect the cartilage. Affected dogs, as well as their parents, should not be used for breeding.