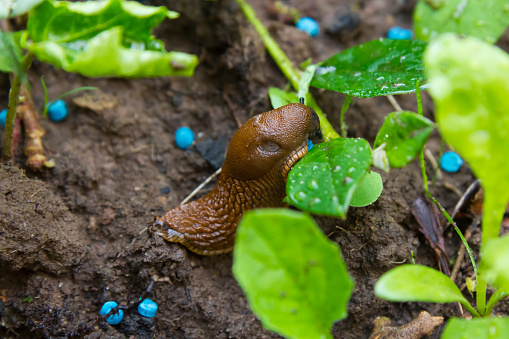 Metaldehyde is a chemical that is most commonly found in slug and snail baits. Rarely, metaldehyde can also be found in solid fuels used for camp stoves. Slug and snail baits come in granular, liquid, spray, dust, pellet, meal, gel or paste forms. They are designed to be placed around walkways and gardens. To attract slugs, these baits often contain bran or molasses, making them tasty to other animals.

What is metaldehyde poisoning?

Poisoning occurs when pets eat metaldehyde-containing slug/snail bait off the ground or from the storage container. Dogs, cats, birds, and other wildlife can all be affected by metaldehyde. Metaldehyde may cause signs of poisoning even when very small amounts are ingested. The way in which metaldehyde causes its effects on the body is not completely understood. Although a low number of calls regarding metaldehyde poisoning are reported to Pet Poison Helpline, a 24/7 animal poison control center, each year, the importance of keeping pets away from metaldehyde is high due to the small amount needed to be ingested for severe poisoning to occur.

What are the signs of metaldehyde poisoning?

The signs of metaldehyde poisoning are dubbed “shake and bake” because animals may have severe tremors or seizures and an alarmingly elevated body temperature. Signs of poisoning are generally seen within a few minutes to up to three hours after ingestion. Early signs may include drooling, vomiting, panting, and anxiety which can progress to include depression, a wobbly gait, or the characteristic muscle tremors, seizures, and hyperthermia. The high body temperature may cause damage to internal organs. Severe cases can result in the animal becoming comatose. Rapid, flicking eye movements (nystagmus) may also occur, especially in cats.

If left untreated, or if the pet has a poor response to treatment, respiratory failure and death can occur. Sadly, some pets that survive these initial signs develop liver failure two to three days after ingestion.

How is metaldehyde poisoning diagnosed?

Diagnosis is based on development of the expected signs and a known or suspected history of exposure to slug or snail bait. Metaldehyde levels in the blood, urine, stomach contents or liver can be measured at a specialized laboratory. Since the results may not be returned quickly and finding a laboratory to run the testing for animals may be difficult, these tests are not commonly performed. Treatment is often started without this testing if poisoning is suspected.

Blood work may be performed to rule out other possible causes of the pet’s signs and to monitor for complications that require further treatment. Abdominal radiographs (x-rays) can sometimes show bait in the stomach or intestines.

How is metaldehyde poisoning treated?

Early decontamination and treatment decrease the risk for serious signs. If ingestion occurred within one hour of treatment, the veterinarian may induce vomiting. Never induce vomiting at home without specific instructions from a veterinarian or Pet Poison Helpline as this may worsen the situation if not performed correctly. Once vomiting is controlled, activated charcoal may be administered to decrease absorption of metaldehyde from the gastrointestinal tract. Activated charcoal should only be administered by a veterinarian because complications, including aspiration into the lungs and life-threatening changes in blood sodium levels may occur.

If the pet is not stable enough to safely induce vomiting, the veterinarian may perform a procedure known as gastric lavage (“pumping the stomach”). During this procedure, the pet is anesthetized and a tube is passed into the stomach to flush the stomach with fluid and retrieve the metaldehyde.

If signs of poisoning develop, hospitalized care will be required. There is no antidote for metaldehyde, but supportive care can treat the signs and help prevent more serious complications. Intravenous fluids and medications to control tremors or seizures may be needed. Cooling measures to lower the body temperature are often necessary. Blood work is commonly performed to monitor liver and other organ function. Medications to support the liver may be given. In severe cases, heavy sedation or anesthesia may be needed to control muscle tremors and seizures. Treatment may be required for several days.

What is the prognosis for metaldehyde poisoning?

The outcome for metaldehyde poisoning depends on many factors including the initial health of the pet, amount ingested, and time to treatment. With early treatment, pets are less likely to develop serious signs. Even when signs occur, many pets recover fully within 2-3 days if appropriate treatment is started early.

How can metaldehyde toxicity be prevented?

The use of slug and snail baits containing metaldehyde should be avoided in any area that can be accessed by non-target animals. Not only can these baits harm your pets, but they are also harmful to wildlife. To control slugs without chemicals, many gardeners use broken shells, lava rock or other rough materials to deter slugs from the area. Placing copper bands around plants or planting lavender, mint or rosemary may also discourage slugs and snails from entering the garden. Shallow cans filled with beer may be used to attract and drown slugs or snails. Care must be taken so that pets do not ingest the beer and develop alcohol poisoning.

Slug/snail bait products containing iron phosphate instead of metaldehyde are considered safer for pets. These baits are still potentially toxic due to the iron content, but much larger doses are required to cause poisoning.

If metaldehyde is used, always store the product out of reach of children and pets. Metaldehyde should be stored in closed containers to prevent accidental ingestion by pets. Pets should not have access to areas where metaldehyde has been applied, as some products may remain active in soil for several weeks. Always follow labelled instructions for application.

If your pet consumes metaldehyde, contact a veterinarian or the Pet Poison Helpline at 1-800-213-6680 immediately. Prompt treatment provides the best chance for a full recovery.