Dogs and cats are curious creatures. When outside, they wander around with their noses to the ground... sniffing a lot of things, licking several things, and eating a few things. Unfortunately, their curiosity sometimes gets them into trouble, especially if they decide to nibble on mushrooms. 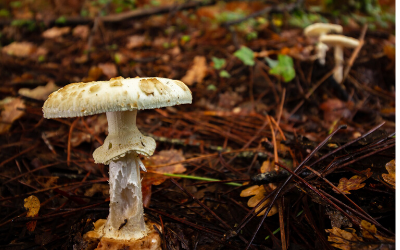 Dogs and cats are natural scavengers, but many mushrooms are toxic and can cause serious or even life threatening illness. Here are a few things you need to know about mushroom toxicity.

Where do toxic mushrooms grow?

Mushrooms grow best in warm, wet weather and flourish in many places in Canada and the United States. They grow in wooded areas, rocky terrains, grassy parks, and even in your own back yard. In warmer climates, they may grow year round, but in most areas, spring and early fall are the prime growing seasons.

Some mushrooms look like the umbrella kind with woodland creatures hiding under them depicted in children’s books. Others look entirely different. There are many different species of mushrooms with a variety of characteristics making identification of individual types quite complicated. If you aren’t a “mushroom expert”, it’s best to assume that any mushroom you find could be a poisonous one. It’s not necessary to know the name of every single mushroom species if you avoid them all.

How serious is mushroom poisoning?

The severity of mushroom induced illness depends on the type and number of mushrooms ingested. Sometimes a pet may have mild gastrointestinal (GI) upset that resolves at home. Other times, pets become extremely sick and require hospitalization. Unfortunately, some pets die despite therapy.

How is mushroom poisoning diagnosed?

Evidence of exposure to mushrooms is the first factor in an accurate diagnosis. Tell your veterinarian if you even suspect that your pet ate mushrooms and when it may have occurred. Be specific when describing symptoms and their time of onset. This information is vital for accurate diagnosis and prompt treatment.

"To help with identification, bring a mushroom specimen with you to the emergency hospital."

After taking a thorough history, your veterinarian will perform a complete physical exam. Next, blood and urine samples will be taken to determine organ function. A sample of stomach contents may also be retrieved to help identify the mushroom ingested. Since some mushroom toxins have a delayed effect on organs, liver and kidney function tests may be repeated every 24-48 hours to monitor function.

To help with identification, bring a mushroom specimen with you to the emergency hospital. Wrap the mushroom in a damp paper towel rather than a plastic bag. This will preserve the integrity of the specimen and make identification easier. You can also take a picture of the mushroom, but make sure to capture all aspects including the gills, cap, and stem.

What is the treatment for mushroom poisoning?

As with most cases of poisoning, prompt treatment is critical to a successful outcome. Minimizing absorption of the toxin is critical so identifying the mushroom in question may take a back seat for a while. Once your pet is stable, mushrooms can be identified by a mycologist at a local college or by visiting the North American Mycological Association website.

"As with most cases of poisoning, prompt treatment is critical to a successful outcome."

Decreasing the amount of toxin that enters the bloodstream may be accomplished in several methods. If your pet sees your veterinarian soon after ingestion, your pet’s veterinarian may induce vomiting to remove mushrooms from the stomach. A GI medication such as activated charcoal that will bind with the toxin and prevent its absorption. Sometimes, the doctor may perform a gastric lavage to eliminate any remaining mushrooms from the stomach.

Your pet will also be given intravenous (IV) fluids to combat dehydration and flush toxins from the body. Fluids also support kidney and liver function while toxins that have already been absorbed are processed.

How I can prevent mushroom poisoning?

First, assume that all mushrooms growing in the wild are harmful until proven otherwise. If your pet wanders outside unsupervised, remove all mushrooms in your yard. Patrol the yard regularly - mushrooms spring up quickly! If you have trouble eliminating all the mushrooms from your yard, consult an expert.

Curiosity is a good personality trait to have in a pet. Inquisitive cats and dogs are usually bright and entertaining. But to keep your curious pet safe, avoid mushroom poisoning by avoiding mushrooms!