What are nasopharyngeal polyps? 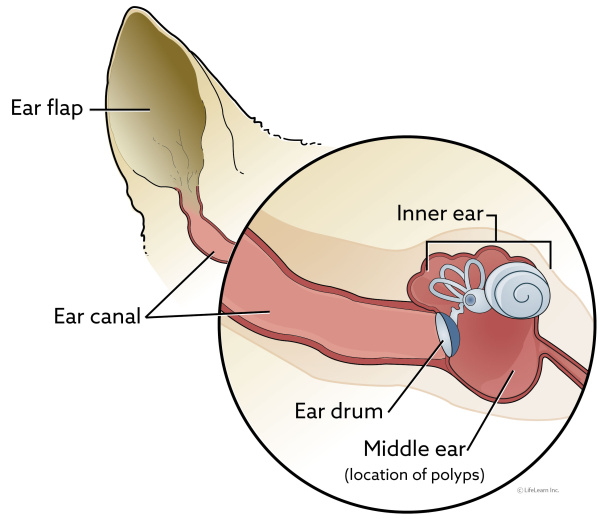 A polyp is a benign mass, meaning that it is not malignant or cancerous and does not often metastasize (spread to other tissues). Nasopharyngeal polyps develop in the middle ear, which is the compartment just behind the eardrum. As the polyps enlarge, they grow down the eustachian tube (the tube that connects the middle ear to back of the throat). As the polyps continue to expand, they may partially block the cavity at the back of the mouth. Alternately a polyp may grow through the ear drum into the ear canal, and in some cases they will grow in both directions.

What are the signs of nasopharyngeal polyps?

Nasopharyngeal polyps impact your cat's breathing. The polyps obstruct the passage of air so affected cats usually develop a distinctive snorting sound as they breathe. Secondary bacterial infections can develop due to the blockage and accumulation of secretions. If this occurs, the cat develops nasal discharge and sneezing. The discharge may be clear or have some blood in it.

If the polyp has extended into the ear, signs may include pawing at the ear, head shaking, head tilt, or discharge from the ear. Rarely cats can experience loss of balance and different pupil sizes.

The cause of nasopharyngeal polyps is not known. Some researchers believe that they may result as a response to chronic inflammation. Others think that a link exists between infections and the development of polyps. Nasopharyngeal polyps tend to occur in younger cats, frequently affecting cats under one year of age.

How are nasopharyngeal polyps diagnosed?

Some polyps are seen in the back of the mouth during an oral examination. The polyp may be hidden behind the soft palate but in some cases it is apparent that there is something behind the soft palate pushing it forward. In cats with nasopharyngeal polyps growing out through the ear canal, the polyps may be visible on deep inspection of the ear canal and eardrum. Most cats must be sedated or anesthetized to perform a thorough examination.

Radiographs (X-rays) can help identify nasopharyngeal polyps and the use of a video endoscope may allow direct visualization of the polyp. CT (computed tomography) or MRI (magnetic resonance imaging) is needed to visualize the extent of a polyp’s growth. A biopsy (surgical removal of a representative sample of the polyp) may be taken. The biopsy is then processed and examined under a microscope and diagnosis can be confirmed.

How are nasopharyngeal polyps treated?

"Surgery to remove as much of the polyp as possible is the most common treatment."

Some cats will require a more serious surgery known as a bulla osteotomy. This operation involves creating an opening into to the middle ear cavity by way of an incision of the tympanic bulla (the rounded part of the skull just behind the ear). This approach allows removal of the source of the polyp making recurrence unlikely. This is the most effective treatment for preventing nasopharyngeal polyp recurrence, but it is a major surgical procedure and surgical complications can occur. See handout “Total Ear Canal Ablation and Bulla Osteotomy (TECA-BO) for further information on this procedure.

Anti-inflammatory drugs such as corticosteroids may be used as an alternative to surgery, or in the post-operative period, in an effort to control the inflammation that is thought to stimulate the growth of polyps. These drugs are much less effective at preventing recurrence.

What is the prognosis for a cat diagnosed with nasopharyngeal polyps?

Most cats enjoy a relatively normal quality of life following standard polyp removal surgery. While recurrence rates are high, many cats have few complications after surgery. In recurrent or severe cases, referral to a board-certified veterinary surgeon may be advisable. Your veterinarian will develop a treatment strategy based on your pet's individual needs.