Uropygial or Preening Gland in Birds 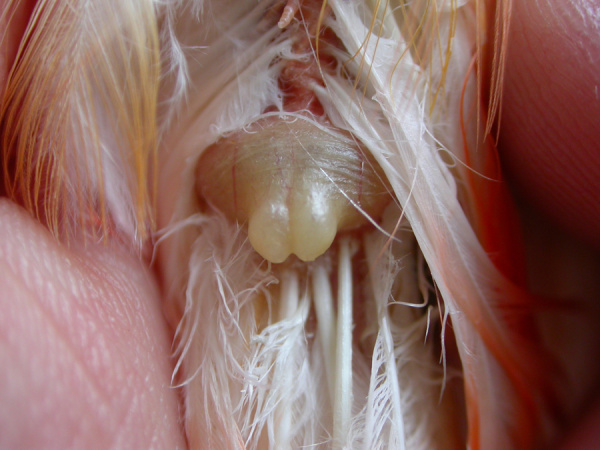 What is a uropygial gland?

Among our pet birds, the uropygial gland (preening gland, preen gland,or oil gland) is found on budgies, most parrots, canaries, most finches, cockatoos, and waterfowl. It is absent in doves, pigeons, Amazon parrots, and Hyacinth macaws.

The uropygial gland is located on top of the base of the tail, on the lower back, just in front of the tail feathers. This area is generally featherless except for a tuft of down at the tip called the uropygial wick. The gland is bi-lobed with two similar sized sections, which secrete a thick, transparent, complex oil (preening oil) consisting primarily of diester waxes (uropygiols), fats, and fatty acids. The oil from each lobe of the gland is secreted through small papilla (nipple-like projection).

The oil secreted by the uropygial gland performs many functions in the bird, including waterproofing and keeping the skin, feathers and bill supple. The oil is said by some to have an antibacterial function. During preening, a bird transfers this oil to its feathers by rubbing its head and beak against the oil gland and then spreading the oil over the feathers on the rest of the body.

"During preening, a bird transfers this oil to its feathers by rubbing its head and beak against the oil gland and then spreading the oil over the feathers on the rest of the body."

The uropygial gland is not normally visible unless the feathers are parted in this area or there is a problem with the gland.

What problems can occur with the uropygial gland?

Vitamin A deficiencies, which occur in birds on poor diets (often high fat, all seed diets), may lead to enlargement of the gland, due formation of a plug in the papilla. This is resolved by dislodging the plug and correcting the diet imbalance (especially increasing Vitamin A).

Infections may also occur, but these are often secondary to vitamin A deficiency, trauma, or immunosuppression, such as occurs with Psittacine Beak and Feather Disease (PBFD).

If you have any concerns, discuss them with a veterinarian familiar with birds.